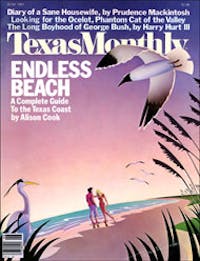 In 1962 my family left Houston for the boondocks near Tomball (population: 1,713), where I encountered my first real-life cowboys. Southeast Texas was not the fabled cattle-ranching area that West Texas was, but the men had all the cowboy characteristics I had seen in books and on the silver screen: chiseled, sunbaked features, razor-cut short hair, work-worn boots, hats, and belts. Many of the younger men had their names embossed on the backs of their belts, and the names seemed to match their faces—“Buck,” “Roy,” and “Jake”—names that sounded cowboy. I came to associate name belts with real cowboys, and my fear of being labeled a Rexall wrangler dissuaded me from getting one of my own.

I assumed that name belts were as authentic as cowpunching itself. Nope. Belts did not become common among Texas cowboys until the turn of the century, and name belts not until more than fifty years later. Levi Strauss introduced jeans in 1853, but they had buttons for suspenders. Belts gradually grew in popularity, but even as late as 1896 the Sears, Roebuck catalog featured 21 styles of suspenders and only 5 belts, declaring, “Belts are popular, more so this season than ever before.” Not until 1922 did all of Levi’s jeans have belt loops.

History does not record who created the first name belt. It was probably an enterprising old saddler forced into retirement as cowboys went the way of the Longhorn. He realized the profit to be made off the nostalgia of a vanishing breed and, betting on the vanity of his customers, tooled the very first “Tex” on the back of a belt. The name belt has since become to Western wear what the personalized license plate is to the automobile.

Today a cowboy belt is a basic component in dressing the part. The majority of us who dress cowboy do so as dilettantes—Texans, yes, but Texans who have never ranched or ridden a horse. None of the old cowboys can recall ever seeing a man wearing his name on his belt in the early days. If a genuine cowboy had any decoration on his belt, it was likely to be the brand of the ranch for which he worked. He put that brand on his saddle, boots, and holster and even painted it on his bedroll. But only a minority of modern Texans are able to claim a ranch or the brand thereof as their own, so the name belt has become an individual brand of sorts—the equivalent of a European coat of arms.

In the early fifties Hollywood began churning out westerns in record numbers, and that contributed to the popularity of cowboy paraphernalia in general. Leather-goods manufacturers began producing name belts and other Western duds on a gigantic scale, using the star, flower, Longhorn, and cactus motifs already favored on saddlery and boots. Now name belts are sold by the millions in outlets ranging from national discount stores like Gibson’s to the posh Cutter Bill’s in Houston and Dallas. They are sold by highway vendors in much the same way as (and often adjacent to) watermelons, fresh eggs, and paintings of Jesus on velvet. Prices, as varied as their sellers, range from $6 for a roadside special to $275, depending upon the grade of leather, buckles, filigree, and numbers of letters to be embossed. Wretched excess may be attained with sterling silver letters costing about $14 apiece. Hand-tooling is the exception today; the faster method is to slide a tray containing the metal letters into a vise, which the maker manually cranks to stamp the name, cookie-cutter fashion, into the leather.

Though remnants of the cowboy era linger on in the name belt, it also reflects the profound changes in Texas. Nowadays, alongside the “Roy” and “Jake” that first fed my romantic ideas of the cowboy, you’ll also spot plenty of Connies and Darlenes as well as a few Tiffanys or Jeremys with their names proudly stamped in leather. Or—more telling—drive down a street in cosmopolitan Houston and you’re liable to see not only the name belts on good ol’ boys and gals but also those sported by Zbigniews, Chuongs, Wolfgangs, and Abduls.