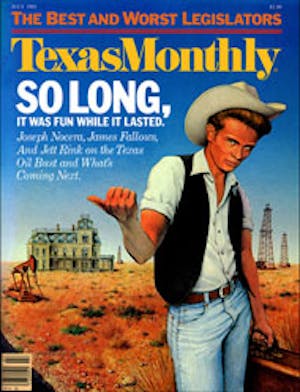 A century ago there was a reason for the prominent ranch gate. For years before that, the ranch house had stood alone amid a vast, unfenced range. Since there were no well-defined roads, the owner built his house to face the prevailing breeze or a scenic vista, or to take advantage of the best point from which to oversee his livestock. Visitors, especially strangers, who approached from the open range had to determine the architectural face of the house as they drew near, lest their intentions become suspect. When barbed wire had crisscrossed the plains, ranchers began to fence their property to protect their grass and water and to fend off Indians, farmers, and squatters. Fencing required more entrances to the ranch, and so the rancher had to leave makeshift gates along the wire, called gaps, for passage from pasture to pasture.

Since the house might be miles from the gate and out of sight, a landowner needed to distinguish the gap leading to ranch headquarters from those leading to pastures, bunkhouses, corrals, and barns, so he marked the main gate with handy discards and found objects like broken wheels, cow skulls, and rocks. The ranch gate became a marker directing the traveler to the house. The most visible landmark on an otherwise featureless prairie, it alerted the wayfarer that a friendly face could be found nearby.

As more ranches sprang up and public roads developed, the ranch entrance became its owner’s trademark. Displayed on the gate were signs advertising a particular breeding stock; the name of the ranch, or its shorthand form, the brand; and the date the ranch was established—the earlier the date, the greater the rancher’s clout.

Texas cattle kings began to enjoy their royalty, and the entrances to their domains reflected their new image. Before the big fortunes were made, luxury and ranch life were a contradiction in terms. A grandiose Arc de Triomphe was a signal to the world that a rancher had taken nature by the horns and created a haven in the wilderness.

Most of the gigantic spreads of early Texas, such as the three-million-acre XIT, have now been broken up into smaller ranches, sold to (horrors!) farmers, or obliterated by encroaching towns and tract housing. The kingdoms are gone, yet the modern Texan still yearns to own a ranch. City folks pay good money to acquire ten scrubby little acres and proudly label it their ranch. They fence it, name it, whack some bull nettle, and construct an entrance gate worthy of a five-thousand-acre spread. As they flee the metropolitan areas of the state, suddenly their ranchettes are dotting every quarter-mile of the countryside. Whether the ranch gate leads to a mobile home or a sprawling hacienda, it has become as commonplace on the Texas landscape as bluebonnets and armadillos.

With the proliferation of the ranch gate, its original purpose as a landmark has been lost to a suburbanite lawn-decorating competition of sorts. While the gate to a modern working ranch may be little more than two cedar king posts flanking a cattle guard, a city slicker’s pint-size country place—usually sporting a name like Little Bit o’ Texas or Lone Star Retreat—may boast massive rock pillars supporting a twenty-foot wrought iron arch. Farm implements and wagon wheels painted silver, cactus, and bottles embedded in rock walls somehow capture a nostalgic impression of the Old West for the owners.

More lamentable is the loss of the ranch gate’s signal of welcome. Its funnel-like configuration was functional; it helped cowboys move cattle through. But it also appeared to be open arms to the visitor. These “arms” may still extend a welcome, but today they are more likely bound by chains and padlocks, with signs reading, “Posted. No Trespassing. Keep Out.”