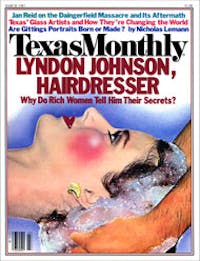 Whole regions of Texas, especially the High Plains, would be practically unpopulated were it not for three men—two well drillers and a banker—whose tinkerings gave rise to the modern irrigation system that made farming profitable on the High Plains. Irrigation rigs are composed of three parts—motor, gear-head, and pump—and though motors have always come from the industrial North, the pump and the gear-head are thoroughly Texan inventions, rooted in oil and sprouted in agriculture.

Mahlon E. Layne was a Midwestern water-well driller in 1901, when he pulled up stakes in South Dakota and headed for the excitement of the Spindletop oil boom. After briefly experimenting with oil field rigs, he went to work as a driller and mechanic for rice growers on the Texas coast. In those days, irrigation pumps were mounted at the bottom of pits dug by hand thirty to forty feet deep, and maintaining the rigs required dangerous descents into those pits. Fright and fatigue motivated Layne to try something better. One afternoon in 1902, on the wall of a farmhouse near El Campo, he sketched the design for a pitless pump. His invention allowed pump mechanisms to be lowered through a pipe to the water table.

Layne’s pitless pumps could work as far as two hundred feet beneath the surface, deep enough to tap the Ogallala Aquifer, then thought to be an underground river that flowed under the arid High Plains. By 1910 Layne pumps were widely available, and speculators and farmers alike were possessed of a new optimism. They thought they could pour underground rain onto the sandy plains.

Aquifer irrigation was an expensive and troublesome proposition, however. Motors were connected to pumps by wide leather belts. The belts went slack in the heat and drew taut in the cold, and the friction they created deprived the pumps of power. Another Midwestern driller who had moved to Texas, George Green of Plainview, solved the problem by means of a powerfully simple insight. Green noticed that in an automobile a drive shaft transferred power across a right angle to the axles by means of a differential gear. In 1914 he made drawings of a pump with what was essentially a Model T Ford differential mounted at its top. His creation, the right-angle gear-head, did away with troublesome belts and laid the basis for the third, economically critical move in evolving the modern irrigation rig.

When the dry winds of the Depression began blowing farmers down the route to California, Artemus “Artie” Baker, a Lockney banker, decided to make irrigation available to everyone. Though irrigation motors were costly, auto motors were cheap and plentiful. Baker wanted to couple V-8’s to pumps, but a technical problem stood in the way: Auto engines produced more revolutions per minute than existing gear-heads could handle. In 1934 Baker asked designers at the Amarillo Machine Shop to turn out a gear-head compatible with Ford and Chevy motors. Before the Depression ended, he and his bank were saving plains farmers from the stinginess of both nature and economics.

Today, irrigation rigs are as much a part of the rural Texas landscape as natural gas wells, oil pumps, and storage tanks for crude. Pumps give water to vegetables in the Rio Grande Valley and flood rice fields along the coast, and perhaps they always will. But on the plains—with 70,000 wells, an Eden of cotton and grains—farmland is drying out, the victim of irrigation’s evolutionary success. The number of new wells drilled has declined over the past decade because the accessible depths have been plumbed, and fewer gallons flow from existing wells because water levels are dropping. Within forty years—sooner in some regions—the Ogallala’s reserves will again be physically or financially out of reach. That is, unless a Layne, a Green, or a Baker comes along with a new answer to the problem of water.