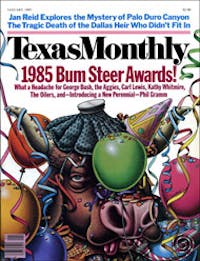 I was in my early teens before I realized that children in other parts of the country could run barefoot through tall grass without fear. Any child who attempted to do so in Central Texas—or in most parts of the state, for that matter—was either very brave or just plain foolish. For Texas fields and lawns had little in common with the velvety expanses of, say, Massachusetts or Northern California. Here, defenseless children had to contend with grass that concealed chiggers, mesquite thorns, hackberry branches, and, grizzliest of all, a small brown barb known to connoisseurs as the sticker bur, land mine of the backyard. No instep, no matter how proudly toughened on sizzling pavement, could endure it.

The sticker bur served notice to suburban children that the Texas landscape, however well fenced, watered, graveled, or gardened, remained untamed and inhospitable. As part of a roving band of neighborhood kids, I learned to survey yards like a point man heading into dangerous territory. A dry, patchy lawn was best avoided, though a healthy-looking turf of Bermuda grass held no promise of safety either. Sticker grass was usually paler and spinier than Bermuda, but that difference was discernible only at very close range.

Our gang may not have known where stickers came from (I believed they were prickly pear burs, blown in from the desert), but we knew full well what they could do. When little Stan Shaw, one of our bravest members, would show off by racing up the street through the grass, the rest of us would wait to hear his strangled yelp—akin to that of a betrayed cocker spaniel. Then we knew the sticker had struck, and another yard was off-limits. Those were tragic moments for us because alternate routes were scarce: Even in October the asphalt was searing, and armies of red ants patrolled the curbs. Of course, no self-respecting Texas child would be caught dead doing the sensible thing, which was to put on a pair of shoes.

The sticker comes from a lateral and low-growing grasslike weed called the sandbur, which has been causing trouble for quite some time. It was first identified in the eighteenth century by Swedish botanist Carolus Linnaeus, author of Species Plantarum, the seminal work in plant taxonomy. The burs are actually spiny seeds that mature in the summer, just in time to torture tiny feet. “No other grassy plant has this . . . lance-armed bur, and a description therefore is almost useless,” writes Edwin Rollin Spencer in All About Weeds. <“He who finds a sand bur does not have to be told what it is.”

Today there are several kinds of sandbur, including southern, longspine, and field sandbur (whose Latin name, Cenchrus incertus, is particularly apt). The most cursory study of a botanical map will reveal why the plants are so familiar to Texans. Sandburs prefer the sandy soil of the southern U.S., especially that beside highways and baseball diamonds, where sand containing sandbur seeds is dumped as fill. Some infested states may have one kind of sandbur but not another, but Texas has all three common kinds, and they all thrive here. In this case, more is clearly not better.

Herbicides can be used to keep the seeds from germinating, but the best ways to get rid of sandbur are (a) mow and water your Bermuda grass frequently, (b) plant St. Augustine grass, which shades and crowds out sandbur, or (c) pull the sandbur out. One A&M specialist confessed that it took him three years to get his yard sticker-free using the last method, but it worked.

Still, there’s one thing to be said for the loathsome sticker. It breeds cautiousness, a quality not widely admired here but useful in a state that features both jellyfish and rattlesnakes. The wise Texan learns to pick and choose his fights with the landscape. Nowadays, for instance, I do run through moderately high grass. But only with my boots on.