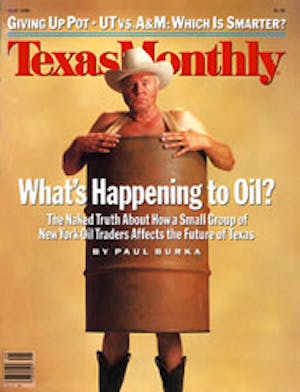 Ranchers don’t call them ponds. Ponds are for picnics and pollywogs. Ranchers call them what they are: stock tanks for sheep and cattle, for the dead-serious business of keeping animals alive in a semiarid land plagued by drought.

Most tanks in Texas are murky man-made reservoirs, muddy watering holes ringed by hoofprints and dung, built by ranchers who bulldoze pits or earthen dams across gulleys to catch runoff and hold it awhile. Statistically, the average tank in Texas covers four tenths of an acre, but the official figure is somewhat skewed—in South Texas a tank might cover 25 acres, while in East Texas you can almost jump across some.

In the early days when grass and water were free, there wasn’t any need for stock tanks. Cattlemen just nudged their herds along from seasonal creek to perennial spring, mimicking the ceaseless roaming of bison across the Great Plains. Barbed wire and fencing changed the old ways, stranding livestock in waterless grids. To provide for their cattle, ranchers began digging pits and damming arroyos to hold rainwater. It was hard work carrying rawhide bags full of dirt out of a crater and emptying them onto a dam. To strengthen his tanks, one rancher in Live Oak County butchered heifers and mixed their blood into the soil; on the Panhandle’s XIT Ranch, hands threw a few sacks of stock salt into the empty tanks and let cattle thoroughly trample the ground as they licked the salt. Even then, many of the dams blew out during the first good gully washer. But ranchers had the right idea: Water was too precious to give up without a fight, “too valuable,” wrote one Texas historian, “to use in making spectacular river floods that benefit nobody but newspaper reporters.”

Strangely enough, tank building didn’t really get going in Texas until ranchers faced their worst times. Born in the Dust Bowl and New Deal years of the mid-thirties, when huge clouds of red soil boiled up from the overworked land, the U.S. Soil Conservation Service (SCS) began promoting tanks with a missionary zeal. A thousand-pound cow—what the SCS refers to as a single animal unit—drinks about fifteen gallons of water a day. Unlike the wiry and wild Longhorn, a heavy high-grade cow won’t stray more than a mile from its water source. By strategically placing tanks, a rancher entices his stock to graze more evenly across a pasture, thereby slowing erosion from chronic overgrazing.

“For the past fifty years the stock tanks have been the carrot used by the government to get ranchers to do something about their soil,” says Gary Valentine, state biologist at the SCS headquarters in Temple. For the most part, Texans have been happy to nibble the carrot. After all, they get to take a free bite. Last year the SCS spent about $500,000 helping Texas ranchers stake out their tanks, while the U.S. Agricultural Stabilization and Conservation Service (ASCS) doled out cost-sharing subsidies to actually build them (tanks aren’t cheap; the going rate is between 50 cents and $1.50 a cubic yard, and the cost of an average-sized tank is about $3,500). If a stock tank will slow soil erosion, the ASCS might pay up to 75 percent. That explains how Texas has transformed itself from a land with few naturally occurring ponds to a state covered with man-made reservoirs—about 840,000, according to Texas A&M University, more than any other state.

Those funky watering holes might not call to mind succulent fish filets, but in Texas, according to the SCS, about 80 percent of them contain fish—mostly channel cat or bass. Even unstocked tanks are full of “trash fish” that could have swum upstream during a flood or gotten stuck as eggs on the legs of great blue herons wading in the shallows.

Though the business side of stock tanks has always been ranch and farm production, nature-watchers have long appreciated their hidden beauty. In his chapter on still waters in Adventures With a Texas Naturalist, Roy Bedichek marveled, “What an ecological revolution has been set in motion by the introduction of water into this spot of desert soil!” If the cattle industry continues its dreary downward spiral, and the big ranches all become ranchettes owned by Houston dentists, tanks might remain to serve yet another purpose, one infinitely more interesting than watering beeves: a home for the water moccasin and a refuge for the vermillion flycatcher, an oasis in the middle of dry and dusty land.