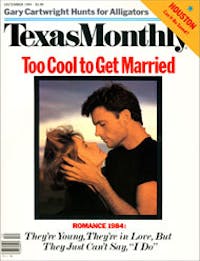 Some people think that Texans are born braggarts. The honest truth is that most of us have to be coached. We begin with a few simple facts about the proud history of the republic and the conditions under which we allowed the United States to join up with us. From there we graduate to pithy anecdotes and colorful metaphors about bigness, oil, humidity, snakes, money, dust, and so on. By the age of five, we are all pretty skilled boasters. I wouldn’t want to exaggerate, though; some are better than others.

Texans brag about Texas because we have always done it, but also because Easterners demand it. Not that bragging is an unpleasant duty. Still, some people are just never satisfied until they push you into a brag or two when you might prefer to remain quiet and modest. Even then they are not really happy with the usual statements. You have to start lying.

For instance, you might start off by saying that Texas is as big as five ordinary states. They would be impressed but not visibly moved. You could say that the state is so big it takes three days to drive across, and that might set them to thinking. But if you said the swimming pool on your ranch is as big as the Gulf of Mexico and the three-day drive to cross the state doesn’t include the day it takes to get from your front door to the end of the driveway, well, then they would smile and shake your hand and say they were glad to know you.

Texans also brag to each other, of course. One morning a neighbor of mine was discoursing on the topic of the land and how it shifts and settles with time and the seasons. The vagaries of the land and the weather have been an honored theme in Texas bragging since the beginning, and my neighbor, a retired dairyman and a patriotic Texan, knew duty when it called. “You know, that ground up around Austin heaves around so much you can’t hardly keep up with it,” he said, staring down at the tips of his black shoes as if this were the beginning of a long, serious discussion. “I had a house up there,” he added. “In the morning you could pour water in the front of this house and it would roll all the way to the back.” Pause. “And wouldn’t you know,” he continued, scratching his neck, “by the end of the day the ground would shift so much that that water would roll all the way to the front again.”

Now, just how did this tradition get started? How is it that Texans came to be so puffed up full of brags and lies, so proud of Texas, as an old saying goes, that they cannot sleep at night?

Embellishing the facts about their new world was a common promotional tactic even among the humorless settlers of colonial America, and by the 1830’s pioneers were lying competitively and laughing about it. American literary historian Walter Blair likens this impulse to whistling in the dark, for boasting was and still is a way to make light of adversity, turn aside the jeers of skeptics, and boost one’s spirits and resolve. Obviously the frontier was no place for negative thinkers.

The Texas frontier was especially hard, and reports back East were not sympathetic; they dwelt upon the bad land, bad weather, mean Indians, shaky politics, and settlers of questionable background, breeding, and motive. To counteract the discouraging publicity, farmers, speculators, and newspaper editors early on began claiming all sorts of fabulous things about the state—for example, that ears of corn grown in the fertile Brazos and Colorado river bottoms were so large that it took two boys to carry one.

The great-grandfather of all Texas braggarts, however, was Davy Crockett, hero of the Alamo. Though some historians now describe Crockett as a cowardly boaster, during his lifetime he was rightly known throughout America and Europe as a sharpshooting frontiersman who could carry the sunrise in his pocket, grin the bark off a tree, kill a bear with his hands, and catch Halley’s Comet by the tail.

Texas now is more civilized. We don’t kill large animals with our hands or grab comets by the tail. For heaven’s sake! Today we build tall, modern buildings so that the stars can find their way across the sky at night. And in the evenings, after a hard day’s work in our bustling, prosperous cities, we take what remains of the sunrise out of our pockets and use it for coals in our portable backyard barbecues.