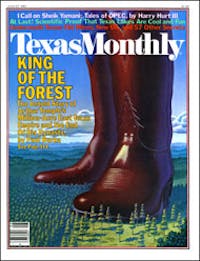 When you think “tract house,” you probably don’t think “Texas”; you think “suburbia,” and that’s a region blander and more homogeneous than we want Texas to be. But the truth is that Texas today is the tract house capital of the world. The nation’s biggest homebuilder, U.S. Home, moved from Florida to Houston in 1979 to be in its most important market. The second biggest, Centex, the parent of Fox & Jacobs, is in Dallas. In the past decade there has been far more tract house action in Texas than in New York and California, which have larger populations. So it seems that the facts would warrant the inclusion of the tract house in our mythology.

Arguably, the best-selling single model of modern times (nobody keeps exact figures on such things) was developed by Fox & Jacobs, and it’s called the 402, or more colloquially, the North Dallas Special. From its inception somewhere back in the mists of the mid-fifties until its discontinuation (because it was getting too expensive for the average family) last year, it was replicated perhaps five thousand times as the farmlands north and west of Dallas fell before the juggernaut of civilization.

The 402 covered about 1,900 square feet, and it always cost just about whatever the average price of a new home happened to be—in its final days, $75,000. It had three bedrooms, a family room, a living room, a dining area, a “garden kitchen,” a breakfast nook, a patio, and a two-car garage, which was in the back because Dallas suburbs have alleys. The walls were framed at a Fox & Jacobs assembly plant. Both inside and out, it was capable of the same range of appearances as Elizabeth Taylor—if everything was carefully maintained it looked terrific, but it also had the potential for quickly going to seed.

As a product, it was aimed at a young, middle-class, white-collar couple with one or two kids, probably new to Dallas and just making the big move from an apartment to a house. Its theoretical underpinning was that people wanted a strict separation between the bedrooms and the public rooms in a house, so those rooms were built on different sides. Furthermore, people wanted to leave their living and dining rooms immaculate, to be entered only on rare occasions, so the real center of the house became the family room, which served the purpose of making it unnecessary to use the living room. Family life took place within the tight orbit of family room, kitchen, and patio.

Today the golden age of the tract house seems to be over, killed by inflation and high interest rates. Tract houses are still being built, but in decreasing numbers—housing starts last year were the lowest they’ve been since 1946—and in decreasing sizes. The special features of the great days, like the living-room, family-room distinction and the roomy front and back yards, are disappearing. So now is probably a good time for contemplating where tract houses fit in the general scheme of things.

Tract houses have always evoked strong emotional reactions, for some reason, and mostly negative ones. They have been held up as symbols of the blandness and conformity of mainstream American life—remember the sixties protest song about the rows and rows of ticky-tacky houses—and in Texas they have been saddled with the additional burden of signifying the end of the days when life was wild and free and a person could do as he pleased. And yet their decline is received as a sign of the end of the American dream, which by the tract house standard is presently relocating in Texas. The reason more tract houses are being built in Texas than anywhere else is that more young couples are arriving or coming of age here with what the housing industry calls family formation on their minds than anywhere else. Perhaps the Texas myth will be able to absorb and even make good use of that fact.