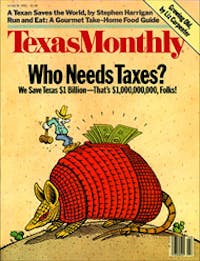 Texans invented the trail ride as a rite of self-renewal, a massive ceremonial trot along vaguely ancestral paths in memory of cowboys, pioneers, and the good old days when there was really someplace to go on a horse. Modeled on the cattle drives of the nineteenth century, the trail ride brings back the time of whoopee-ti-yi-yo, but without all of that lonesome cowpoke business, since a trail ride is essentially a big, long party.

The grandest, most sacred trail rides are in February, during the Houston rodeo season. For these highly publicized events, Texans by the thousands take off from their jobs, put on authentic Western or pioneer costumes, and ride together for days or weeks from the country to the city. Along the highways and into the suburbs they carry flags and club banners, parading through town after town, camping in fields and parks, celebrating all the way with drinking and dancing, barbecues, and campfires.

The Salt Grass Trail, begun in 1952, was the first trail ride. Its originator, Reese Lockett, was mayor of Brenham and a rancher who in his youth had driven cattle from Central Texas to winter pasture on the rich salt grasses of the coast. One day Lockett was bragging to some Houston journalists and rodeo officials about that, and they dared him to retrace his old path from Brenham to Houston in time for the opening of the rodeo. Lockett accepted, and a television reporter went along in a covered wagon to record the week-long trek.

Lockett’s ride was a publicity stunt, but it also caught at something deeper: a widespread longing for a place and an era that had passed in Texas. The next year about forty men, mostly ranchers and old cowboys, showed up wanting to ride the so-called Salt Grass Trail. Soon hundreds and then thousands of people from all over the state were participating. What they all had in common—the ranch hands, oilmen, shopowners, newcomers, and displaced country people—was that they believed in Texas, in the romance of the West, and they wanted to be a part of it. They wanted to have a past, to remember where they came from, even if they didn‘t come from there.

That’s what I wanted. In my neighborhood in the fifties it was easy to pick out the trail-riding families. They had horse trailers in their driveways instead of station wagons, and they reeked of rawhide—even the children, even on school days—scuffling past in their boots, hats, flashy fringed jackets, and string ties. For them the trail ride was almost like a religious festival. Every year I watched them join the thousands of other horseback riders streaming importantly into the city. And I knew that if I ever got to ride on the Salt Grass Trail, I would somehow become more of a Texan.

Trail riding hasn’t always been such great fun, however. The first trail riders sought authenticity: they slept on the hard ground with only their saddles for pillows, and they bounced on horseback in the cold rain for days and days without any music or dancing to lift their spirits. They doubted whether women could do that. But after a few years the hardships got to be tiresome, so they decided that it was the idea that counted. They began sleeping in plush recreational vehicles and campers, even in nearby motels, and women and children were invited along. Soon the singing and dancing began.

Over the years, a dozen trail rides were started, each growing into a permanent year-round social organization with officers, trail bosses, special costumes, and club badges. All are devoted to the spirit of the West, but most celebrate a particular heritage as well. There are the Southern, Sam Houston, Texas Independence, and Old Spanish trails, the rides that commemorate the role of black pioneers, and the Los Vaqueros Rio Grande ride, which begins at the border. All of those rides converge in Houston for a grand parade down Main Street, but there are also trail rides now in San Antonio and Fort Worth and in other states.

Every year, though, new freeways and developments stand in the way. It is more and more difficult to celebrate the heritage of Texas by waving hats on TV and riding from the vanishing countryside through the suburbs and on into the city. But as rural Texas and the memories of the Old West grow more distant, the more people there are who want to pay their solemn respects by saddling up any old pony for a nostalgic ride with a few thousand cowboys and pioneers.