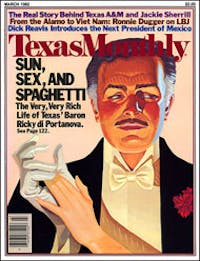 Much that is haunting and inhospitable about the Texas prairie finds its image in the tumbleweed. There is something doomed, or at least purgatorial, about that plant, the way it skitters silently across the waste ground, perfectly insensate but still seeming to bristle with wanderlust.

“Lonely but free I’ll be found,” sing the Sons of the Pioneers, “drifting along with the tumbling tumbleweeds.” A person would have to be unusually resistant to cowboy hokum not to feel some plaintive stirring within himself when he hears that song or when he encounters its subject on a gusty fall day out on the range. The tumbleweed is as much a visual trademark of Western romance as the moonlit silhouette of a coyote.

Taxonomically, though, the tumbleweed is a difficult thing to get a grip on. The term is casually applied to half a dozen different plants that all have the facility of dispersing their seeds as they are blown about by the wind. Only one of these, Amaranthus albus, or tumbling pigweed, is indigenous to Texas. But Amaranthus is rare and probably not the plant that the Sons of the Pioneers mean. The archetypal tumbleweed is more likely Russian thistle, or Salsola kali, which did not appear in the United States until the 1870’s, when its seeds were inadvertently carried over along with the flax seeds of some Russian immigrants.

The stowaway seeds thrived in the harsh, barren soil of the plains. The tumbleweed is a tough, aggressive plant, needing little water to support itself and yet requiring a good deal of open space to send out its shallow roots and grow into its globular form, which can reach five feet in diameter. It was perfectly at home in the loose, played-out soil of the Dust Bowl and in the vast overgrazed domains of West Texas.

Tumbleweed is an annual that germinates in the spring and produces a verdant ground-cover plant ornamented with tiny flowers. In early life its leaves are tender enough to provide sustenance for livestock, but they soon grow spiny and inedible. By the time it is full-grown, the tumbleweed holds tens of thousands of ripening seeds. Many of them fall where the plant is rooted, but many more are still attached when the first sustained winds of fall come and break the tumbleweed off its thin stalk and send it drifting across the plains. These remaining seeds will either be deposited along the way or remain with the tumbleweed when it falls into a ditch where the wind cannot reach it or snags against a fence or some other obstruction.

Early settlers regarded tumbleweeds as a menace. They tended to leach away soil nutrients that might otherwise have gone to desirable crops, and in a grass fire they could become bounding fireballs, extending the front of an advancing conflagration for a hundred yards or more. They are not exactly prized today either. They are officially regarded as pests, and county extension agents are ready with instructions about how to poison them. If left uncontrolled, they can still crowd out a rancher’s forage grass and pile up against a fence line in such numbers that they provide a foundation for a mound of dust that will someday obscure the fence completely.

But even as pests, tumbleweeds do not seem to generate much excitement. They are, in the great scheme of things, a minor component in the ecology. It is in the imagination, where their lonesome desolation continues to strike a sympathetic chord, that tumbleweeds loom large.