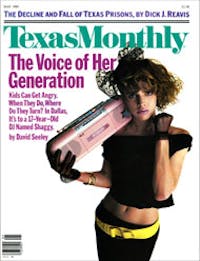 Cowboys have always been dandies. In 1893 W. S. James noted their penchant for style when he wrote that the cowboy “has his flights of fancy as clearly defined as the most fashionable French belle.” Fastidious about the accoutrements and imposing in their appearance, cowboys have never paid much mind to looking different. But they wear what they do for practical reasons. A wide-brimmed hat shades the cowboy’s eyes from the burning sun and serves as an umbrella in the rain; a bandanna, pulled up over his mouth and nose, becomes a mask against choking dust. Pointed boots slip easily into stirrups, and leather chaps protect his legs against thorny brush. But over the years, his shirt, the Western shirt, has undergone a metamorphosis—a sartorial shift beginning in the twenties—that has had more to do with the cowboy’s romantic image than with practicality.

When the cowboy was first being celebrated as the hero of the Wild West, in the dime novels of the late 1800’s and later in such classics as Owen Wister’s The Virginian (1902), his shirt was a drab blue or gray and rather plain. It was collarless, usually pocketless, loose-fitting, and made of cotton or wool. But when Hollywood started making westerns in the early 1900’s, the cowboy stars needed to sport something more distinguished than the dreary shirt of the real cowboy, so the shirt began to change. Star Tom Mix preferred a glamorous tailored shirt that sometimes had a buttoned bib front (a cavalry style later worn regularly by John Wayne) or half-moon pockets and contrasting piping sewn around the shoulders. Mix’s success spread the cowboy’s appeal. Scores of singers cast off their hillbilly image—their overalls, work shirts, and yokel characteristics—gave themselves cowboy names, and dressed in Western attire. Gene Autry, the “Nation’s Number One Singing Cowboy,” bedizened himself in flamboyantly colored shirts with busy patterns, fancy stitching, special snaps, and wide cuffs, setting the style for Western entertainers. It was during the heyday of the singing cowboy in the thirties, which coincided with the rise of professional rodeos, that the Western shirt as we know it today emerged.

Cowboys, being notorious imitators, saw what rodeo performers and Western movie stars were wearing and wanted the same thing. Since they couldn’t afford to buy a custom-made gabardine shirt from famous tailors such as Rodeo Ben, of Philadelphia, the cowboys got their wives and sweethearts to improvise. Then Jack A. Weil, a partner in Miller and Company, of Denver, saw a Chinese tailor in San Francisco putting glove snaps on a shirt and decided to use similar but better ones on his firm’s shirts. He talked the Scovill Manufacturing Company into selling him its Gripper fasteners, even though they were not intended for clothing. So finally, in 1939, working cowboys could buy commercially produced Western shirts with snaps.

You could tell a modern Western shirt by the small yoke in the front and back, often outlined in piping or cording. The shirt was fitted and brightly colored and patterned; it had snaps (once made of real mother-of-pearl) instead of buttons and two front pockets with pointed flaps that snapped closed. It had all the features a cowboy would appreciate. A lonesome rider out on the range wouldn’t have to worry about carrying needle and thread to replace a button; the flaps on his pockets kept his tobacco tin from bouncing out while he rode; the yokes, with their double fold, made his shirt durable; the tighter fit prevented his shirt from getting caught on saddle horns and barbed wire; and the extra-long tails stayed tucked into jeans. It was a fairly simple shirt. But Western stars—like Roy Rogers—kept forging ahead in flashiness. Nudie, Hollywood’s renowned Western tailor, transformed the cowboy shirt into something exotic with fringe, rhinestones, and garish patterns. His most famous outfit, a gold lamé tuxedo designed for Elvis Presley in the late fifties, cost the star $10,000.

Sixty years ago Hollywood cowboys did a lot for the shirt on the working cowboy’s back, and lately they’ve done a lot to promote cowboy chic. In 1980 Urban Cowboy created so much hype about dressing Western that it increased the variety and quality of clothes available to the working cowboy. It also had an effect very different from that of those B-westerns in which a man cared more for his horse than for his lady: Suddenly the shirt became sexy. As Debra Winger puts it when she pops open the snaps on Scott Glenn’s shirt with a simple flick of her wrists, “This . . . this is my favorite thing.”