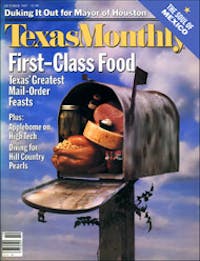 Like most of the other spectators in Memorial Stadium on the evening of September 21, 1968, I didn’t realize I was witnessing a piece of football history. A piece of something else maybe, but definitely not history. In a game against Houston, University of Texas coach Darrell Royal had just unveiled his antidote for the three previous mediocre Longhorn seasons, and it was not a pretty sight. It was called the wishbone offense (actually, at the time, it didn’t have a name), and on that day, anyway, it appeared to be the clumsiest, clunkiest, most anachronistic attempt at scoring ever drawn on a locker-room blackboard. As the game lurched to a 20—20 tie, I had to wonder if Daddy Darrell had gone prematurely senile. At first blush, his wishbone was a football-size egg.

But all great art takes awhile to be appreciated, and it wasn’t until the fourth quarter of the Texas-OU game a couple of weeks later that Royal proved that the wishbone was, indeed, art. Behind 20—19, the Horns got the ball on their own fifteen-yard line with 2 minutes 37 seconds remaining. What ensued was—I’m sorry—just plain awesome. Spreading the ball among his three running backs, quarterback James Street marched the offense down the field to seven points and a victory. The amazing thing was, they made it look easy, as I’m sure Picasso did when he sat down to draw.

Like many great works of art, the wishbone was equal parts genius, plagiarism, and luck. Unhappy after three lackluster seasons, Royal wanted to prove wrong the critics who said his straight-forward blocking-and-tackling, kicking-and-field-position approach to the game was outdated. Borrowing from the option-running offenses used first by Bill Yeoman at U of H and later by Gene Stallings at Texas A&M, among others, Royal and assistant coach Emory Bellard devised a combination of simplicity and duplicity, brute strength and sleight of hand, that ultimately proved the one thing Royal’s style of football had always argued: It really is a simple game.

Physically, the only change Royal made in the old split T he had learned under Bud Wilkinson at the University of Oklahoma was to edge the fullback a few steps closer to the quarterback, creating a wishbone. But once the ball was snapped, the defenders must have felt as if they were on the wrong end of a game of Space Invaders. Each play started as a basic fullback dive, either to the right or to the left. But depending on the defenders’ reaction, the quarterback had the option to hand off to the fullback or to keep the ball himself and edge down the line of scrimmage, then either turn upfield or pitch the ball back to the “trailing” halfback. At its best, in the hands of a quarterback like Street, the wishbone was a magnificent shell game. It rested on a single gimmick, but the superior execution made it practically unstoppable. As Royal describes it, “The wishbone is always running downhill at the defense. The only way they had a chance was to come and get it and have a hell of a collision.”

The gaudy figures Royal’s wishbone ran up on the scoreboard over the next nine years bear that out. Between 1968 and 1977, when Royal retired and new coach Fred Akers scrapped the system, the wishbone won the Horns two national titles and trips to six consecutive Cotton Bowls, earning the team a remarkable 80-19-2 win-loss record. It invariably produced flamboyant results; forty points and five hundred yards of total offense per game became commonplace for Texas teams during the wishbone era. It made fleeting stars of moderately talented athletes like Street and made legends of gifted runners like Roosevelt Leaks, Earl Campbell, Greg Pruitt, and Billy Sims. It restored an old-fashioned regionalism to college football. The casual New Year’s Day bowl watcher didn’t really need a scorecard to know that the team ramming the ball down the field like a Roman phalanx was from the South or Southwest and that the one putting the ball in the air was from the West or East Coast. In that way, the wishbone made the relationship between Texas and football all the more transcendent.

With the retirement of Royal and of Bear Bryant in Alabama, the wishbone has headed toward extinction, though Barry Switzer still uses it at OU. But it has a secure place in Texas mythology, where some yahoo like Jett Rink can stick his finger in the ground and become a millionaire in a matter of minutes. In its way, the wishbone affirmed the same truth about football. Or as the coach himself might put it, you don’t have to be sophisticated—just good.