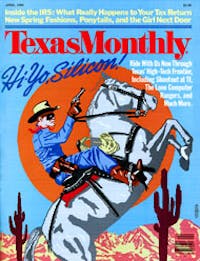 Her name was Emily Morgan, and she was the sweetest little rosebud that Texas ever knew. She was, in fact, the Yellow Rose of Texas. That song is not, as you may have thought, simply a celebration of a rather blah ideal of Lone Star womanhood. It is an homage to the accidental heroine of Texas independence.

Our story begins in April 1836, a panicky time for the nascent Republic of Texas. The Alamo had fallen, the garrison at Goliad had been massacred, and the newly elected government was in flight. Sam Houston, in command of a restive volunteer army heavily outnumbered by Santa Anna’s seasoned troops, was busily conducting a combination strategic retreat and basic training program.

There lived at that time, near a settlement called New Washington, at the mouth of the San Jacinto River, an indentured servant girl named Emily Morgan. She was, as Martha Anne Turner writes in her seminal work The Yellow Rose of Texas: Her Saga and Her Song, a “comely mulatto . . . exceptionally intelligent, as well as beautiful.” Emily was a member of the household staff of James Morgan, a North Carolina merchant who had made his fortune in Texas real estate and who, at the time of Santa Anna’s approach, was away commanding the rebel forces on Galveston.

The army that Santa Anna led across the plains of Texas was a formidable force, but it did not move with lightning speed. It was burdened with its commander’s three-room carpeted tent, his opium cabinet, his champagne supply, and—since the sacking of Harrisburg—a piano. Santa Anna, it hardly needs to be said, was not shy about his creature comforts in the field. When his eye fell upon Emily Morgan, the generalissimo was smitten. Whether the attraction was mutual we do not know, but the mulatto girl quickly became one of the spoils of Santa Anna’s campaign.

Turner invites us to believe that Emily remained a staunch Texan while under Santa Anna’s sway. She certainly appears to have done her part in keeping her abductor occupied. Why, historians ask, did Santa Anna choose an untenable encampment on the plains of San Jacinto, with the Texan Army in front of him and a bayou prohibiting his retreat? Why, on the afternoon of April 21, when he knew that Houston’s forces were only half a mile away, was his army taking a siesta? The answer resounds through the ages: Santa Anna was in a hurry to get into the sack with Emily Morgan.

While the concupiscent commander and the fetching servant girl occupied themselves within the tent, the Texans charged across the plain and set upon the idle Mexican camp with the force of a crushing wave. The battle was over in eighteen minutes. Santa Anna slipped away, half dressed, clutching a box of chocolates. He was discovered the next day, ignominiously disguised as a private of his own army. We lose track of Emily Morgan shortly after her services to Texas were rendered. She never surfaced again, except of course in song.

The earliest extant version of “The Yellow Rose of Texas” resides in the Barker Texas History Library at the University of Texas—a brittle, faded holograph, bearing only the initials of its presumed author, H.B.C. The song is a tribute to “the sweetest rose of color this darky ever knew.” Over time the racial overtones of the song were leached away, and by the time Mitch Miller codified the present version, in 1955, the song was an all-purpose Texas anthem, suitable for use in Ralph Yarborough’s Senate campaign and Butter Krust bread commercials. (“It’s Butter Krust bread of Texas,” goes this thumping travesty, “enriched with qual-i-teee.”)

But there are people around to see that Emily Morgan is not forgotten. There exists in this country a semivenerable, semi-secret organization whose members know one another by the tiny yellow roses pinned to their lapels. They are the Sons of the Knights of the Yellow Rose of Texas, and in their hushed councils the name of the true first lady of Texas is kept alive. Members of SKYRT maintain that it is possible to visit the San Jacinto battlefield at night and see among the moss-draped oaks and the commemorative markers—not one of which bears her name—the ghost of Emily Morgan. Just like in the song, she “walks along the river in the quiet summer night.” If you should encounter her in this fashion, a simple thank-you will suffice.