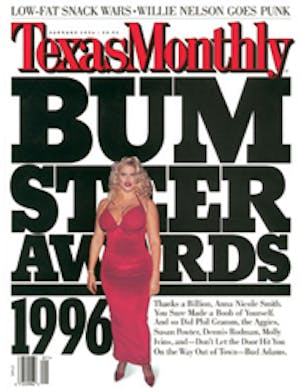 THE ECONOMY DIDN’T GO BUST IN 1995, BUT PRACTICALLY EVERYTHING ELSE DID. Like good intentions. Lee Bass had donated $20 million to Yale for courses on Western civilization, but when he wanted to approve the faculty, Yale said thanks but no thanks. George Bush resigned in protest from the National Rifle Association, but son George W. signed a bill giving Texans the right to carry handguns. Jerry Jones added defensive back Deion Sanders to the Cowboys’ lineup for $35 million, but Barry Switzer forgot to have him cover San Francisco’s Jerry Rice. Volunteers handed out organ-donor cards in memory of Mickey Mantle only to be criticized for drinking beer on the job, because Mantle had been an alcoholic. And Dick Armey meant to refer to Massachusetts’ gay congressman as “Barney Frank,” really he did, but somehow “Barney Fag” just slipped out.

When it comes to going bust, however, few can match Anna Nicole Smith. Take the outfit the 28-year-old model wore to the funeral of her 90-year-old hubby, Houston oil tycoon J. Howard Marshall II: People described it as “a white gown with its neckline at half mast.” Buxom she may be, but bucksome she isn’t. Shortly after the marriage, Marshall’s son Pierce was given power of attorney over the $500 million fortune, and Anna Nicole was forced to sue for spousal support. But Marshall died before the case could be resolved, and now the bereaved widow is suing for half his income during their marriage. She did get half of something, though—Marshall’s ashes—but only after son and widow argued over funeral arrangements (they held separate services) and burial plans (he wanted cremation; she wanted a mausoleum). Once again they ended up in court before reaching the half-ash settlement.

That should be enough to keep anybody busy for a year, but Anna Nicole still found time to celebrate a Planet Hollywood restaurant opening in San Diego by joining part-owner Bruce Willis on stage—and pop out of her dress; lose a lawsuit to a former housekeeper, who accused her of sexual harassment; win a settlement from New York magazine over an unflattering cover photo that showed her gobbling junk food for its “White Trash Nation” issue; and star in To the Limit, a movie about the CIA and the mob that, it is safe to say, will not win any Academy awards unless someone invents a new category. With such credentials, who else could be our Bum Steer of the Year but Anna Nicole Smith?