WHO: San Antonio artist Matt Tumlinson and San Antonio musician George Strait, whom you might have heard of.

WHAT: A mural of King George that captures the troubadour in all his regal glory.

Had an awesome time painting on the home turf! Here’s south Texas native and country legend “King George”- N. St. Mary’s, San Antonio Texas 2019. Great group of people doing great thing in this one of a kind city. I’m so happy to be apart of @sanantoniostreetart! Big thanks to @gravelmouthgallery for putting together an awesome event #sanantonioart #realcountrymusic #texasart #matttumlinson #kinggeorge. @georgestrait @spratx

WHY IT’S SO GREAT: George Strait’s music is iconic and immortal, and thus it makes sense that it be immortalized on the side of a building just thirty miles north or so from where he was born. There are many ways to depict the troubadour—in starched Wranglers and a cowboy hat, onstage strumming his guitar, maybe peering out the window of a pickup truck—but Tumlinson gives the King of Country the true regal treatment instead, outfitting him with a crown and a scepter. (And check out that cape!)

The mural in San Antonio isn’t the first time that Tumlinson has depicted a legend of Texas music on the side of a building. Out in the West Texas town of Rankin, Tumlinson’s depiction of Willie Nelson as a saintly figure smoking a joint, clutching Trigger, and beaming toward passers-by welcomes all to the town of fewer than eight hundred people.

The portraiture doesn’t stop at Saint Willie and King George. Elsewhere in Rankin, in an oil field, you’ll find a portrait of Matthew McConaughey as Wooderson, his Dazed and Confused character, as well as a local building emblazoned with the image of non-Texan (but famous portrayer of Texans) John Wayne. And another San Antonio wall got a depiction of an unnamed woman dressed like Davy Crockett, swinging her rifle as a club.

All of Tumlinson’s mural work is fun to look at, but there’s something especially great about his pieces featuring Strait and  Nelson—he captures the musicians in a way that looks like how we think of them, with Willie beatified and approachable and George balancing a royal distance with a friendly grin. Let’s hope Tumlinson does Bun B next. 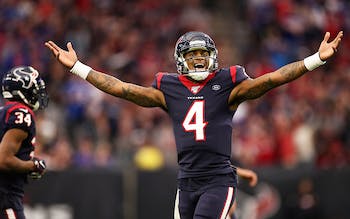