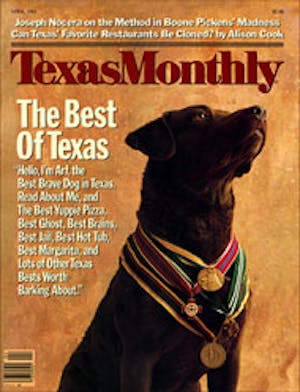 On fine spring days when the sky is blue and decked with clouds, a peculiar exodus takes place from Texas’ cities. People pack their loved ones—babies, betrotheds, favorite aunts, pets—out to the nearest and best patch of bluebonnets, set them down amid the prodigious blue, and snap their pictures. The photos are then put in albums, slipped into wallets, framed and hung on walls, or sent to out-of-state relatives. Sometimes they are published in yearbooks or entered into photo contests. Bluebonnet snapshots are a badge of place, proof of membership in the large and otherwise amorphous Texas clan. Frequently, other props are used in snapshots to indicate classes of Texans, such as a Cadillac or an oil derrick for the rich or a flashy oversized pickup for the urban cowboy, but the bluebonnet belongs to everyone.

An expanse of those blue and stalwart flowers strewn across a pasture or along a highway prompts such a welling-up of joy—it is to nature what an excellent symphonic passage is to music—that the bluebonnet has become the victim of profuse attempts to describe its perfection. Things of great beauty that also bear the burden of being common are difficult if not impossible to praise, and that explains why bluebonnets have inspired more clichés, doggerel, and bad art than any other of our indigenous emblems. J. Frank Dobie was at his worst when writing about bluebonnets (for example, in The Cattleman, May 1942: “The bluebonnet fragrance—a fragrance as intoxicating as some delicate essence of the Mediterranean shore and at the same time, leaf aroma mingling with flower aroma, as tonic as the breath of a heifer chewing her cud on a prairie of ripe mesquite grass”). And on canvas the bluebonnet is about as gauche (or kitschy, depending on your point of view) as a painting on velvet. So, for some time now, our state flower has been an object of scorn in the world of arts and letters.

To heap ridicule on the flower and not on the people who have failed to rise to its occasion is to misplace disdain. Fortunately, most Texans have ignored these aesthetic debates. Come springtime, they will go romp in the bluebonnets and document the pilgrimage on film. That is not to say that bluebonnet snapshots make for good art. It is notoriously difficult to take a picture of people in those flowers. The sun is invariably too bright, forcing the subjects to squint, or too high in the sky, washing out all detail. The breeze rattles the bluebonnets, so they come out blurred and vague. And film manufacturers have yet to invent an emulsion that records the blue as vividly as one’s eye does. On top of all that, the baby cries and the bee stings, since both infant and insect fail to appreciate the rite in progress and grow frankly irritable. (Eastman Kodak may or may not have noted that film sales go up in Texas during bluebonnet season, but doctors are aware of the increased incidence of bee stings on the chubby little arms and legs of toddlers in March and April.)

If the end result is less than brilliant photography, that is all right, because a bluebonnet snapshot is simply one’s private entrance into memory. It is the record of a day in the country, out of doors, in the fresh air. The romp is what it’s all about. The bluebonnet season was perhaps best celebrated in the little town of Marlin, just south of Waco, where off and on for almost thirty years (up until the mid-sixties) the citizenry sponsored the Bluebonnet Photo Fiesta.

Because the highway department takes wildflowers so seriously, it provides Texans with mile after mile of bluebonnets—its right-of-way properties exceed a million acres—and that’s why in spring city folk stake out their patch not in a bucolic pasture but alongside rather hectic highways. This brief interlude in a patch of bluebonnets is one way Texans can make their peace with nature, and they are drawn there because the flowers are so unequivocally blue. In a place where the sky is such a big part of the landscape, and its color and clarity are so important to setting a tone of general well-being, any additional touch of blue can only be for the better. A Mrs. A. L. Morgan, writing in a 1941 issue of Texas Parade, understood the color’s fundamental lure, and that is why she rose above all other writers on the subject of bluebonnets: Springtime, she wrote, is when the sky falls on Texas.