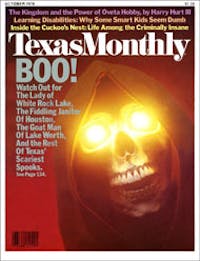 Bang the drum slowly, friends, because the cowboy hat and its cousin, the farmer’s straw hat, are vanishing from the Plains. Just as folks in the rest of the world have discovered cowboy hats as Texas chic, the real thing has been relegated to weddings, funerals, and VFW dances. The rest of the time, the basic Texas head will likely be topped off with a new headdress, whose first advantage is that it probably arrived free of charge. It is also cooler (and warmer), stays put in the wind, staves off tractor rollovers, and does just about everything better than the classic hats, except hold water. It doesn’t, alas, look better, but who’s to argue with what the people want? Ladies and gentlemen, I give you the gimme cap.

As in, “Gimme one of them caps,” a request honored many times a day by agricultural implement salesmen, seed dealers, beer distributors, sponsors of golf tournaments, anyone interested in promoting a product or an event by having their message carried atop a good old boy’s head during the working day. In the last six years these caps have become the rural equivalent of the urban T-shirt as billboard. Most popular are Caterpillar and John Deere; the most prized are DeKalb Seeds and Bow Waw Dog Food.

Athletes, politicians, criminals, writers, and folksingers will wear anything, but some people will never put on a Gimme Cap. Probably Pope John Paul 1 will not wear a DeKalb Seeds cap while blessing crowds in St. Peter’s Swuare. Members of the New York Philharmonic, Cary Grant, Mr. Peanut, Henry Kissinger, and Averell Harriman will likely never favor the Gimmes. Whole towns seem to wear them (Abilene) and others (New York City) sport not a one. As usual, the Big Apple is the last to know. But I predict that someday even they will come around. Like Western boots, Gimme Caps will be seen everywhere. There will be Gimmes for Studio 54 and Elaine’s and Lehman Brothers, and perhaps we’ll spot Baryshnikov in mid-leap wearing a New York City Ballet Gimme Cap. But by then, of course, the real foldks will be wearing something else.