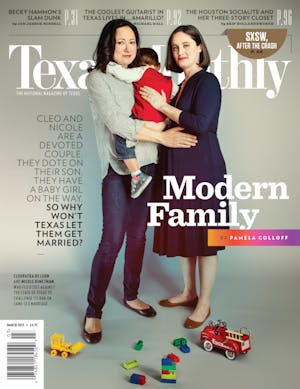 Black Beauty, Elana James (Snarf Records, February 24)
As Hot Club of Cowtown’s fiddler and singer, James is best known for playing western swing and hot jazz. Black Beauty is a reminder that her training—studies in classical and North Indian music, a sideman gig with Bob Dylan—ranges much further. And so: a disparate bunch of original compositions, an Azerbaijani folk song, and covers of Dylan, the Dead, and, hmmm, the electro-pop duo Yazoo.

All Tore Up: Texas Hot Rod Portraits, George Brainard (UT Press, March 1)
The attendees of Austin’s annual Lonestar Rod & Kustom Round Up car show wear an armor of sorts—tattoos, sunglasses, fifties-style greaser and rockabilly garb. But Brainard has been a fixture on the scene long enough that his subjects open up to the camera—at least for the split second it takes to reveal a moment of pure joy or sheer resignation.

All These Dreams, Andrew Combs (Coin/Thirty Tigers, March 3)
The sophisticated arrangements on this sophomore effort suggest Combs’s abiding love for his fellow Texan Roy Orbison, another connoisseur of melancholy. But they also demonstrate that this Dallas singer-songwriter has taken to heart the aesthetics of his adopted hometown of Nashville—the Nashville, that is, that once gave us Jolene, Behind Closed Doors, and Old No. 1.

iZombie (The CW, March 17)
Erstwhile Austinite Chris Roberson’s comic book about a young woman who becomes a member of the walking dead but is otherwise just like you and me—except for that nagging hunger for human brains—was one of the daffier delights of recent years. The small-screen adaptation by another Austinite—Veronica Mars auteur Rob Thomas—supposedly strays far from the source material, though hopefully not too far.