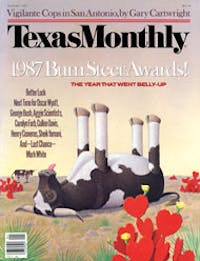 You could not mistake a coronary bypass for anything other than major surgery. In the recovery rooms of Houston’s Texas Heart Institute, patients who have recently undergone the operation lie in eerie repose beneath identically patterned sheets. Though most of them are still deep in their anesthetic haze, their faces hint at some troubled awareness. Their skin is gray, like the skin of newborn babies, and like newborns they look thunderstruck, grasping for some revelation that will be slow to dawn.

The breastbones of these patients have been split in two; veins have been stripped from their legs and stitched onto their hearts to reroute blood around their gunked-up cardiac arteries. Yet most of them, in a very short time, will be fine. The coronary bypass has its critics—they say its popularity is due more to its ability to make surgeons rich than to make patients well—but it’s often an elegant remedy for the debilitating pain of angina. Besides, the bypass speaks to the most resonant preoccupations of the Texas character. It has danger, grandeur, consequence. It has the potential of mending the heart while satisfying some deep wish of the soul to come close to death and walk away.

Texas is the world capital of the coronary bypass. It is done here in greater numbers than anywhere else, and Texans like to argue the case that the first bypass occurred in Houston in 1964, when H. Edward Garrett improvised one in an emergency during open-heart surgery (this event was not reported until 1973, allowing the Clevelend Clinic to cop the record).

Let’s say our patient is 55 or so. He’s in the oil-field equipment business. He smokes, he drinks, he has a history of red meat abuse. His arteries are clogged with yellow fat, and every time he thinks of the price of oil or of his daughter living in a mobile home with an unemployed tool pusher he feels the grinding pain of angina. He’s pretty sure he needs a bypass, and when his cardiologist suggests it for him he’s prepared. He doesn’t just nod meekly. He says, “Well, hell, let’s get the damn thing over with!”

He faces the operation with fear but also with eagerness and is proud to learn that Denton Cooley, surgeon-in-chief at the Texas Heart Institute and the man who has revascularized more hearts than anyone in America, will do the needlework himself. When the day comes and the surgeons rip into his breastbone with a stainless steel power tool, his body lurches but his conscious mind stays in hiding. They slice into his leg and remove a long section of saphenous vein, tying off its branches as they go. The breastbone is pried open with a kind of jack—a Cooley retractor—and they cut through to the heart, pulling back the shroud of the pericardium to reveal the great ugly muscle itself. Denton Cooley appears at this point and takes over, happily snipping and sewing without a trace of hesitation, inserting the cannulas that channel blood away from the heart so that it can rest as its functions are taken over by a heart-lung machine. The patient’s blood is cooled by the machine, and Cooley pours a pitcher of cold water into the open chest to further quiet the heart, until finally it is still and the surgical field is clear of blood. The heart, covered with fat, lies as shapeless as an oyster inside the smooth pink shell of the pericardium.

Cooley makes an incision in one of the arteries and sees, as all the tests have promised, that it is completely blocked. He trims the end off a length of saphenous vein and begins to attach it downstream of the blockage. All the while our patient is so still and distant it seems hardly possible that he could ever come back to consciousness again.

But he does. He is free of pain and proud of himself, and once or twice he tells people he has had a quadruple bypass when he has had only a double. But his boastfulness has a somber edge to it. He goes through a period of introspection bordering on depression. He broods on the knowledge that his heart was open to view, that another man touched it, and that in those moments there was no great difference between being alive and being dead.

He does not become a philosopher, but now and then his mind skitters over to a deeper track. He’s like an astronaut who has returned from the moon, unsure of what he’s experienced and how it fits into his life. Nevertheless, he enthusiastically recommends a coronary bypass to any of his friends who are feeling the least bit peaked or out of sorts. “If you gotta have an operation,” he tells them, “that’s the one to get.”