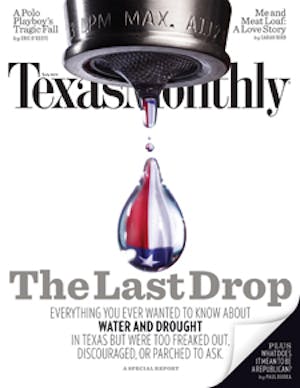 Throw your plans out the window. We scoured the state in search of the top events and offerings, from conspiracy theory talk at the Sixth Floor Museum and the Boerne Village Band to a night at the drive-in for the Austin Film Society’s Summer Series. Here’s our super select guide to the things you absolutely can’t afford to miss.
[July 13–July 19]

Life In Photographs
“If I had to put a photograph on my headstone, it would be the Life cover of Eisenhower’s funeral,” said Bob Gomel, the Life magazine photographer who captured the 1960s and ’70s. “Mounting a camera 280 feet up in the Capitol rotunda, looking down at the proceedings below — it was quite a technical accomplishment.” The shot is one of many iconic photos that are in Mr. Gomel’s portfolio, selections from which will be on display in the exhibit “Multiple Exposures” at Pictures Plus Gallery. The retrospective will be heavy on unpublished pictures that Mr. Gomel discovered in his archives. One shows President John F. Kennedy emerging from the first space capsule at Johnson Space Center. “It was one of those magical finds,” Mr. Gomel said. He also has a number of never-seen photos of the Beatles, including one of a standoff between the Beatles’s security and some “well-appointed ladies” trying to bust into their hotel suite. Mr. Gomel was born and raised in New York City but moved to Houston 33 years ago to pursue an advertising career. “I was a heavy smoker in the ’60s, and when I came to Houston, that first week it occurred to me to quit smoking,” Mr. Gomel said. “I haven’t thought about cigarettes since. I attribute that to the healthier lifestyle I was able to live in Houston.”
Pictures Plus Gallery, July 19, 7 p.m., picturesmore.com

What Really Happened
Gary Mack, the curator of the Sixth Floor Museum at Dealey Plaza, has probably heard all of the John F. Kennedy conspiracy theories — from the three tramps arrested in Dealey Plaza who were thought to be C.I.A. agents to the various eyewitness accounts that have been embellished over time — and the one that comes up most is how President Kennedy’s motorcade route was changed at the last minute to suit the assassination. But it is summarily dismissed. “The route wasn’t decided until Nov. 18, once the speaking location was confirmed,” Mack said. “There can’t be a route until you know where J.F.K.’s going, right?” The Sixth Floor Museum tells the story of president Kennedy’s assassination on Nov. 22, 1963, and how it has shaped Dallas. Mack and Stephen Fagin, the museum’s associate curator, will discuss assassination myths for the Friday the 13th session of the Meet the Museum series. Read Stephen King’s recent 960-page tome, “11/22/63,” to see if it can help you come up with a conspiracy theory that stumps these experts.
The Sixth Floor Museum at Dealey Plaza, July 13, 11:30 a.m., jfk.org

Man Alive
In 2010, Sam Beam — the former professor of film studies turned frontman for the folk band Iron and Wine — was asked to rate his top ten movies in the Criterion Collection, the acclaimed series of important classic and contemporary films. Number three on his list of more than 500 available titles was The Third Man, the British film noir about an American pulp novelist who travels to post-war Vienna and gets caught up investigating the death of an old friend. Find out what attracts Beam, the Hill Country singer-songwriter whose verse about the uplifting aspects of life seems at odds with this whodunit, when he hosts a screening of the film. The event will be the night before his annual benefit concert for the Midwives Alliance of North America. Eat free popcorn and consider that this progressive soundtrack is largely the byproduct of a zither, a peculiar tabletop stringed instrument Beam employs in his eclectic oeuvre.
The Paramount Theatre, July 19, 7 p.m., austintheatre.org

Beat It
The down-beats of bass and tuba meshing with the off-beats of clarinet and assorted other instruments of the Boerne Village Band gives the group’s live shows the effect of being in a wave pool. Up and down, up and down. The “oom-pah” band—the longest continuously playing German band outside of Germany—was founded in 1860 and continues to be a mainstay of the annual Wurstfest sausage bacchanal in New Braunfels. But perhaps a more convenient and peaceful environment for seeing them is Abendkonzert, the summer concert series in their hometown. A buoyant version of “Grüsse an Texas” (“Greetings to Texas”) will most likely summon even the laziest from their folding chairs.
Main Plaza, July 17, 7:30 p.m., boernevillageband.org

Outer Space
The mentally ill folk singer Daniel Johnston can come across as comical onstage, which should enhance his current tour in support of Space Ducks, the psychedelic album accompanying his comic book of the same name.
Fitzgerald’s, July 14, 8 p.m., hihowareyou.com