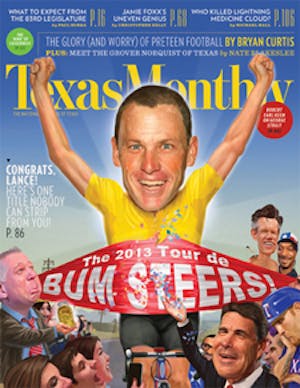 THROW YOUR PLANS OUT the window. We scoured the state in search of the top events and offerings, from the a discussion of the Kennedy Legacy with Charlie Rose in Dallas and the Rules of Basketball exhibition to B.B. King’s tour across Texas. Here’s our super select guide to the things you absolutely can’t afford to miss.
[January 4–13]

An American Dynasty
Charlie Rose, the Emmy-award-winning journalist, is doing away with the black backdrop that creates a sense of heightened intimacy on his PBS talk show and letting a live audience join him in Dallas for a discussion with Robert F. Kennedy Jr. and Rory Kennedy, the third and eleventh children, respectively, of Senator Robert F. Kennedy. Billed as the Kennedy Legacy, it will allow Mr. Kennedy, an environmental advocate, and Ms. Kennedy, a documentary filmmaker, to talk about their family’s impact on American politics and culture. The roundtable discussion will kick off a series of observances in Dallas marking the fiftieth anniversary of President John F. Kennedy’s assassination at Dealey Plaza on November 22, 1963. It is the first step in a concerted effort to seek forgiveness without forgetting.
AT&T Performing Arts Center, January 11, 8 p.m., attpac.org

The Collectors
The oil business has brought a bounty of riches to Texas, including some of the world’s finest art purchased by Jerry Lawson, daughter of Gus Glasscock, the successful offshore driller. When Lawson moved to San Antonio in the sixties, she struck up a friendship with John Leeper, the founding director of the McNay Art Museum, and presented him with a woodcut depicting native life in the South Pacific that she had bought from a dealer. Leeper recognized it as one of Paul Gauguin’s earliest and finest prints. When Lawson came back with another, Leeper realized he had a patron with a keen eye and began mentoring her on the fine art of collecting. “It’s not that John taught her connoisseurship,” said Lyle Williams, curator of the exhibition “For Jerry: Masterpieces from the Lawson Bequest.” “She had her own definite eye. But through him she was able to connect with a different part of the art world.” This amounted to her amassing Picassos, Goyas, and Jasper Johnses, and through this weekend the best of them will be on display in the Jerry Lawson Print Gallery, which just celebrated its thirtieth anniversary.
McNay Art Museum, January 11-13, mcnayart.org

Learn the Fundamentals
The end of the football season can be trying for fans, but attending “The Rules of Basketball,” the exhibition closing Sunday at the Blanton Museum of Art, might help ease the transition between sports. It’s a great primer on the history of hoops, which dates back to 1891, when James Naismith drafted the thirteen original rules of “basket ball.” This list is on display at the exhibition and contains the surprising rule that dribbling originally was not allowed. But mostly the game is the same, though the physicality of the players has undergone a major evolution. They are bigger, faster and more athletic—a development that comes into focus in the dual exhibit by Paul Pfeiffer, a photographer and videographer who, according to promotional materials, “reframes the players, the ball, and the architecture of the arena to underline the sublime potential of the game and its metaphoric undertones.”
Blanton Museum of Art, January 11-13, blantonmuseum.org

Nothing but the Blues
Texans once nursed BB King, back to health after he fell ill on tour in 2007 and was admitted to a Galveston hospital. He will probably remember that when he returns to the state on Friday for a five-city run that starts in Houston and ends in Tyler. If ticketholders to these shows are lucky, the 87-year-old King of the Blues—will express his gratitude by digging a little deeper, sweating a little more and holding a note on Lucille (his Gibson) just a little bit longer on “The Thrill Is Gone.”
House of Blues, January 11, 8 p.m., bbking.com

The New Jam
You can hear the influence Prince and GZA, of the hip-hop group Wu-Tang Clan, had on Grupo Fantasma—the ten-piece, Grammy-winning Latin-groove collective from Austin that frequently backs both performers—on a mini-tour they will play leading up to the release of their new, as-yet-untitled album produced by Steve Berlin of Los Lobos.
Sam’s Burger Joint, January 11, 8 p.m., grupofantasma.com

Rain Date
If you stand close enough to the 65-foot-tall replica of the Lucas oil derrick when it gushes at the 112th Spindletop Anniversary Celebration & Reunion, you can feel what it was like on January 10, 1901, when wildcatters struck pay dirt and fortunes were made—except you will get drenched with water instead of actual black gold.
Spindletop-Gladys City Boomtown Museum, January 12, 10 a.m., spindletop.org