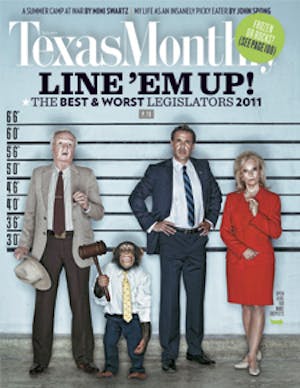 Throw your plans out the window. We scoured the state in search of the top events and offerings, from the Parker County Peach Festival in Weatherford and the Buddy Holly “jukebox musical” in Ingram to watching Mark Cuban play a little ball. Here’s our super select guide to the things you absolutely can’t afford to miss.
[July 8–15]

WEATHERFORD
Peachy Keen
Despite the drought, peaches will prevail at the 27th annual Parker County Peach Festival. “They might not be as large as last year, but they’re plenty good,” said Taylor Hall of the Weatherford Chamber of Commerce, the organization hosting the event. The proof is in the cobbler. Hall said peaches from Hutton Farms, a local orchard that supplies the majority of the festival’s peaches, “were selling like crazy at the farmers’ market last week.” The festival coincides with the beginning of Freestone peach season—good news for bakers who prefer this variety because its pit, or stone, is easy to remove. Fill some reusable sacks with local growers’ various bounties, which will include tomatoes, corn, and watermelon. But be sure to take a break from stuffing your bag (and face) and listen to live music, make some arts and crafts, or participate in the Peach Pedal Bike Ride, an event drawing 2,300 cyclists who traverse courses ranging from nine to 62 miles in order to gain free admission to the festival.
Downtown, July 9, 8 a.m. peachfestivaltx.com

HOUSTON
Hop Aboard
Drink a beer; preserve history. That’s the concept behind the History on Tap series hosted by the Galveston Historical Foundation. The first installment, “The 1877 Tall Ship Elissa and the History of Craft Brewing,” brings Houston-based Saint Arnold Brewing Company, makers of Elissa IPA, to the Tall Ship Elissa—a three-masted sailing ship docked at the Texas Seaport Museum—for a discussion about beer culture on board such vessels. “We’ll focus less on the building and preservation of ships and more on the history of that style of beer and our relationship to the Galveston-Houston community as a whole,” said Lennie Ambrose of Saint Arnold. A complimentary Elissa IPA and the chance to win a rare sleepover in the officers’ quarters of the Elissa, whose name is derived from Virgil’s epic poem “The Aeneid,” are included in the price of admission. If you can’t make it to the event you can still help save history by purchasing a six-pack of the hoppy India pale ale at the grocery store; a portion of sales goes to the ship’s upkeep—and every penny counts as the Historical Foundation embarks on a $3 million Keep Elissa Sailing restoration campaign.
Texas Seaport Museum, July 9, 7 p.m. galvestonhistory.org

EL PASO
Mission-Based
Visiting Ysleta Mission is like going on a pilgrimage. It is the oldest mission in Texas, established in 1682 as a sanctuary for Tigua Indians who fled the oppressive Spanish colonialists in the Pueblo Revolt. Do your part to keep Native American customs alive by attending the Ysleta Mission Festival, a three-day immersion into the local culture. Grab a partner during the live music and do the Pueblo Two-Step, sample traditional bread cooked in mesquite-fired ovens, and purchase some handcrafted jewelry that the vendor assures will bring good luck. Admission is free, but proceeds from purchases made at the festival help renovate, restore and conserve the 329-year-old mission.
Ysleta Mission, July 8-10, various times. ysletamission.org

FRISCO
Good Sports
The NFL lockout might not lift until Fall (if at all this season), so probably one of the only ways to see a Dallas Cowboy in action any time soon is at the Reebok 2011 Heroes Celebrity Baseball Game. Tight end Jason Witten and linebackers Bradie James and DeMarcus Ware will all be eager to show that they still possess athletic ability after nearly every opponent manhandled them last year. A few other high-profile athletes and actors are on the roster of this charity baseball game benefiting the Heroes Foundation, which promotes youth sports, and the Mike Modano Foundation, which assists needy children. The only person on the confirmed “famous faces and local luminaries” list who does not fit distinctly into either the athlete or actor camp is Mark Cuban, owner of the Dallas Mavericks. Cuban was awfully silent during his team’s championship run, but expect him to bust out of his shell and add to the game’s entertainment value.
Dr Pepper Ballpark, July 9, 6 p.m. heroesbaseball.net

Cypress
Lovely Rita
Frozen or on the rocks? That is the question at the Margarita Challenge Grand Finale, where one recipe will rise above countless others to win a coveted debut on the bar’s drink list.
Don Julio’s Mexican Restaurant, July 8, 7 p.m. margaritatexas.com

INGRAM
Not Fade Away
What would have been Buddy Holly’s 75th birthday isn’t until September 7, but you can get primed now at “Buddy: The Buddy Holly Story,” the “jukebox musical” that features more than twenty of his classics.
Point Theatre, July 8-23, 8:30 p.m. hcaf.com