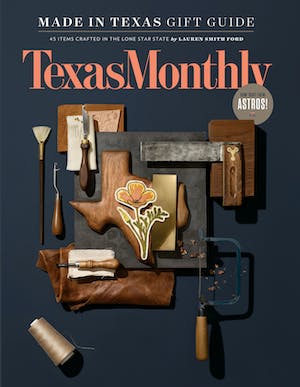 A visiting friend waited for me at a bar. “Hurry up,” she texted. “Marfa hipsters intimidate me.” She needn’t have worried; hipsters are gentle, nonconfrontational folk. Besides, I’m not convinced the hipsters she saw were Marfans at all. They were likely tourists.

If you haven’t heard, Marfa’s been kind of a thing. The town still shows up everywhere: among the 52 places worldwide the New York Times says we should visit; in an affectionate 60 Minutes portrait by Morley Safer; as the background of Beyoncé’s photo shoots; as the setting for the bawdy Amazon series I Love Dick. Marfa’s draw, in part, is its dual nature as a small, far West Texas ranching town and an offbeat art town that grew from the Chinati Foundation, a contemporary art museum founded in the eighties by the late artist Donald Judd. The juxtaposition allows various cultural cross-pollinations to take place, a spot where high art can be as familiar and accessible as Dairy Queen and ranchers and poets coexist in a faraway place on the Texas frontier.

People who visit or read about Marfa often have questions. Is everyone here an artist? (No.) Are you an artist? (No.) Why do the shops and restaurants have unpredictable hours? (They just do.) Are the Marfa lights real? (Yes.) What was Don Judd like? (Complicated, like the rest of us.) I’ve never been the tinkerer who takes apart the toaster to see how it works, and therefore the questions about Marfa sometimes baffle me. I can appreciate, however, that other people want to see the ghost in the machine. Helpfully, a couple explanatory books were recently published: Kathleen Shafer’s Marfa: The Transformation of a West Texas Town and John Slaughter’s Marfa and the Mystique of Far West Texas. Marfa for the Perplexed, by former Texas Monthly columnist Lonn Taylor, and with a foreword by yours truly, comes in 2018.

In understanding Marfa, a certain suspension of disbelief is useful, or at least a willingness to be open to elements that are unseen or unarticulated. Here’s what I mean: a visiting writer some years ago was intrigued by Marfa’s name. The old story, at least the one I’ve heard the most, is that a railroad surveying crew turned to the engineer’s wife to name a water stop, and she plucked “Marfa” from The Brothers Karamazov, which she was reading at the time. The visiting writer became convinced this story was false. The novel’s publication in English and its appearance in this country apparently didn’t jibe with the town’s 1880s formation. He argued that the name was actually related to the Marfa lights and had to do with a phosphorescent sea phenomenon called marfire, which was later shortened to “Marfa.” He published his findings in the newspaper, hoping for a lively debate. No one, however, wrote in. No one cared. The story we had suited Marfa just fine.

Marfans have a history of believing what they want to believe, even if it flouts sense or fact. Judd, for instance, arrived in Marfa in the pre-internet, pre-cellphone, and pre-Instagram days of the seventies and fashioned a former military base into a synthesis of architecture, landscape, and artwork that is intended to exist as such permanently, always. He knew the result would be great, regardless of whether it seemed outlandish to others. He was right, of course. Installed in two brick buildings, Judd’s one hundred mill-aluminum boxes at the Chinati Foundation never move but always change, their silvery forms shifting and shimmering as sunlight slips over them. How much iteration is there? How much do the sun and clouds and grassland matter? What else is possible?

And that’s the crux of Marfa: plumbing the question of what is possible. It’s a generous thing, to point out the limitlessness of the universe. Judd established an art museum of permanent work amid an isolated, poverty-stricken, hard-to-access town set in a vast landscape of untamable beauty. If that perversity and its genius float your boat, you’re probably inclined to be a doer yourself. Maybe you’d put on a play, start a mechanic’s shop, open a restaurant, learn Chinese, drive a Meals on Wheels route, or all of the above. There is freedom here to pursue dreams of all stripes and the tolerance of others to support that. The sparse population demands participation, and we end up in relationships that we may never have had in a more citified, rarified place. Living in a small town tends to emphasize and escalate what we’re supposed to know about the wide world: you need to be kind; you need to contribute. Judd sought an existence in which art intersected daily life, and in a way, that’s how we ended up, informed by creative energy but also deeply committed to one another as neighbors and friends. When you know practically everyone, they all matter. If they’re doing something they believe is serious and important, then it’s serious and important.

Judd didn’t invent this generosity of spirit—it was already ingrained in the community by the people who’d lived here for generations. My theory is that Marfa’s isolation and its lack of population or resources forced its people to be open to the eccentricities of whoever came along. When there are just a few people to make a community work, you have to take people as they come, whether they’re a homemaker, a cowboy, or a kilt-wearing artist from New York. You never know whom you might need. 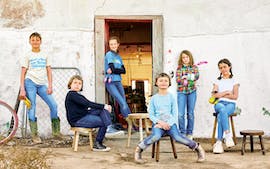 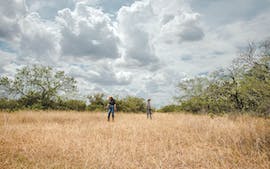 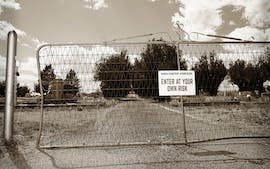 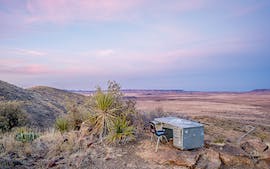 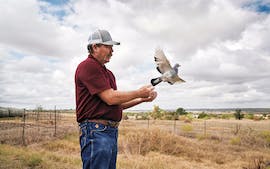 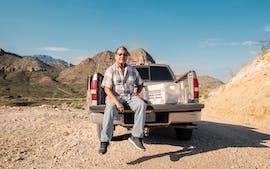 This is my story about Marfa, or at least part of it. The story you tell will be different. I decided to move to Marfa on Thanksgiving Day 1992, while on a tour of the Chinati Foundation with my parents. It was bitter cold, spitting snow. I had a small revelation walking among Judd’s kilometer-long installation of concrete boxes in Chinati’s field. At that time, Marfa had a couple of gas stations, a post office, a school, a grocery, a courthouse, a public library, a butcher shop inside a Texaco, a few cafes and feed stores, a dime store, sky, grass, and an art museum—only what was necessary. The lack of excess was appealing, and abruptly I quit my good job in Austin for a life of uncertainty in a small cowtown in decline, a place so remote and empty that it felt as if you were standing at the edge of the known universe.

Anyone new in Marfa really stuck out, and after I’d been here a little while, people started to ask point-blank, “Who are you?” Their candor was so pure it stung. I said I was writing a novel, but mostly I read library books that I felt sorry for—old, outdated anthologies or biographies no one had checked out in years. There wasn’t much to do, and no one had money. Nights were quiet. The hoots of great horned owls floated down the street. You could hear the stars blink on and off. Sometimes folks gathered around the tailgates of pickups parked downtown. We counted the cars that passed; we waited for something to happen. Mostly, people told stories.

Long ago, I was told, local congregants grew upset with a priest who was impatient and lazy, but the diocese would not replace him. One Sunday, they’d had enough. The men packed up the priest and marched him to the railroad tracks, where they allegedly stopped a train, hustled the priest on board, and told the engineer to put him off in El Paso. For this, God will not bless Marfa.

Long ago the cavalry unit in Marfa phased out horses in favor of tanks. On the last day that the horses were here, all the troops gave a hail and farewell salute to honor their mounts. The oldest horse in the unit, Louie, was draped in black and led to the front. After soldiers passed him with raised sabers, Louie was shot, a gesture about the death of the mounted cavalry. His despondent handler went on a grief-sodden bender that ended, I was told, when he took his own life atop the grave. It’s his wrenching cry you sometimes hear at night.

Sitting on the tailgate, these tales were imparted with sadness and gravity. The storytellers believed them very deeply. If they think these events happened, I am not the one to say they didn’t.

Marfa balances between permanence and impermanence. I suppose every place does, but here that balancing act seems more fragile and obvious because of the landscape: the unpeopled grass, the bald mountains, the chatty wind. The sky is inescapable; the rocks do not change. It makes you feel small, because you are small. Despite our insignificance, people are finding each other in Marfa. They’re teaching school, opening shops, staking claims, rearing grandkids, volunteering like crazy, trying things out. Marfa’s slow evolution isn’t due to the accomplishments of a few folks who just swooped in but rather to the long-term, careful, and deliberate commitment of recent arrivals and native Marfans alike who choose to be here and make this a vibrant community. It’s an act of faith to be here—faith that it’ll all work out, that people will look out for you, that you won’t go broke, that you’ll find contentment amid the loneliness. There ain’t no guarantees.

Sometimes visitors ask about a perceived divide between local folks who have been here for generations and those who have moved here more recently. No such seam is apparent to me when I scan the room at a funeral or a football game. That’s why an outsider’s views of what Marfa is, or isn’t, are merely fictions to me. Our community, like any, is stitched together by needs and interests. There aren’t many longtime locals present at art lectures, true. I’m not fussed by it. When Judd brought art to Marfa in the seventies, few people who lived here had been to a museum. Plenty of people still joke that Judd’s concrete pieces are rain shelters for the pronghorn, and many residents have never been to Chinati. They’ve been told it’s art, and in general, this is met with acceptance. I doubt my neighbors have visited the museum. That’s okay. We’re still friends.

There is an unexpected development lately. People now sometimes visit Marfa not for the art or landscape but because they’ve heard it’s abuzz with cool stuff to do or see. Theirs is an incomplete version of Marfa, and I tend to think those folks are missing out. They don’t usually stick around anyway. We’ll keep doing what we’re doing. Marfa’s mysteries linger, and its future won’t untangle until we get there. The train engineer’s wife reads Dostoyevsky. Louie’s handler sobs atop a horse’s grave. Judd’s concrete boxes loom solid and solemn in the pasture. Some things aren’t meant to be understood in full.