“Brad Pitt is going to see me! All of Hollywood is going to see me!” That’s what 47-year-old Carrie O’Brien thought when she first spied the July 2-July 9 double issue of Sports Illustrated, the one featuring her and four of the other original Dallas Cowboys Cheerleaders on the cover. Dixie Smith Luque, also 47, was asked for her autograph: Two buyers she’d sold homes to returned after their closing, copies of the magazine in hand. (“You forgot to mention this,” one said.) Vonciel Baker, a Southwest Airlines flight attendant who says her age is none of my business, was asked by her pilot to sign copies for passengers before the plane landed “because we’re supposed to do twenty-minute turnarounds.” Then the pilot asked her to sign his copy.

It’s rare for women not in bikinis to grace SI’s cover and rarer still for women over forty, yet the issue has attracted more than its share of media attention, with everyone from CNN to ESPN calling to do follow-ups. The reason should be obvious: The Dallas Cowboys Cheerleaders are international icons. They were the first pinups of modern sports, the sizzle on the steak that established the Cowboys as America’s Team as much as the players on the field did. They’re also the reason Dallas women are perceived as some of the most gorgeous creatures on earth—big smiles, big hair, big makeup, big cosmetic surgery, and all.

Tex Schramm, the general manager of the Cowboys, and Dee Brock, the manager of the high school students who led cheers at Cowboys games, knew what they were doing back in 1972 when they called Texie Waterman, the hottest dance instructor in town. They wanted Waterman to come up with a way to generate more fan spirit, so she, in turn, called several of her students. “She told us they were looking for wholesome, all-American entertainers,” Luque says.

The seven cheerleaders chosen from a group of one hundred hopefuls—in addition to O’Brien, Luque, and Baker, the pom-pom-waving trailblazers were Anna Marie Carpenter Lee, Rosy Hall, Deanovoy Nichols, and Dolores McAda—were hardly bimbos. Growing up, several of them had studied tap, jazz, and ballet. Luque had been on the drill team at MacArthur High School in Irving and had danced for the talent portion of the Miss Dallas and Miss Irving beauty pageants (she was a finalist in each). O’Brien had led the Leopardette drill team at Adamson Cheerleaders High in Dallas. Lee, who also won’t reveal her age, was an officer in the Rebelette drill team at Robert E. Lee High in Tyler, then joined O’Brien as one of the Apache Belle dancers at Tyler Junior College. Baker was unsuccessful the three times she tried out for cheerleader at Lincoln High in Dallas, but she made the squad and broke the color barrier at Texas Lutheran College in Seguin. O’Brien remembers that tryouts weren’t as hard as she had initially thought: “Remember ‘These Boots Are Made for Walkin’?’ Most contestants wore white go-go boots and pranced around like Nancy Sinatra. I wore black boots and had a cap pistol that I pointed at the judges.” Lee danced to “Put On a Happy Face.” Baker did a routine to Bette Midler’s “Friends,” touching the hands of most of the people watching, the judges included. “Texie said, ‘You’re the funniest thing I have ever seen in my life,’” Baker recalls.

They were paid $15 a game. Practices were two or more times a week (Luque, a student at Southwest Texas State University in San Marcos, had to drive 470 miles round-trip each time). Among the rules to follow: Be prompt, don’t chew gum on the field, and don’t fraternize with the players. Baker is the only one who admits being tested on that last rule. “Before a game, one of the equipment boys knocked on our dressing room door and handed me a note. It was from a player we all know, but I’m not going to tell you who it was. It said, ‘Will you please meet me after the game? I’d like to take you to dinner.’ I took the note and wrote on it, ‘Not in your lifetime!’”

In their lifetimes, however, history was made. The Cowboys Cheerleaders transcended pom-poms and became fixtures of popular culture. There were books about them (including A Decade of Dreams, by Mary Candace Evans), two made-for-television movies (one starred Jane Seymour), exercise videos, commercials, guest spots on TV shows like The Love Boat, even USO tours overseas to perform for the American military. There were also less desirable forms of recognition, such as the XXX-rated Debbie Does Dallas series.

Of the original seven, only one, McAda, is no longer with us; she died in 1975. The others have found life after the ‘Boys to be quite fulfilling. O’Brien, who played on the U.S. women’s soccer team for five years, is a regional sales representative for Dale Tiffany lamps in Dallas. Nichols, 49, missed the SI cover shoot when Tropical Storm Allison flooded her home in Houston, where she works in customer service for Excell, a long-distance telephone company. Lee, who went on to be the dean of women at Tyler Junior College and the director of the Apache Belles, runs a video production company in Tyler with her husband and is raising her two sons. Hall, 47, got divorced after quitting the Cheerleaders and moved to New York, where she attempted a dancing career; she now lives and designs fashions in London, where her sister Jerry, the ex-wife of rock star Mick Jagger, also lives. Baker has been a flight attendant since 1981 (“I went from cheerleading for the Cowboys to cheerleading for Southwest,” she says. “I’m Herb’s girl now”). For the past six years, Luque has been a sales representative at Stonebrook Builders, selling, she says, more than $5 million in new homes a year in Plano and Frisco.

Although they were criticized by feminists for ushering in the Age of Jiggle just as the women’s movement was gaining strength, they have no regrets about what they did or how. “I always loved to dance,” Luque says unapologetically, “and dancers through time have worn skimpy outfits.” Still, they’ve gotten more self-conscious with age. “The uniforms today? No way would I wear one,” O’Brien says. “In my own home I might but not in public.” Baker says that when the SI photographer tried to get her to open her shirt a bit, she told him, “Nuh-uh. No cleavage, no way.”

She was flattered that he would ask, however—and it certainly won’t be the last time that she or the others have to entertain such a request. “I told Dixie that we’re going to have to be on a diet for the rest of our lives,” O’Brien says, “because they’re going to find us when we’re eighty and blue-haired and walking with canes, and they’re going to do a story. I can’t have my peach cobbler anymore.” Luque, at least, will be ready: She lifts weights, goes to Jazzercise classes, and does aerobics, and that’s not all: “I eat right—lots of fish and vegetables—and I drink eight to ten glasses of water a day.” Lee, for her part, runs two miles four times a week, does fifteen minutes on the Stair Stepper, and lifts weights for half an hour. “I love to eat,” she says. “My husband and I belong to a gourmet club. Exercise balances that out.”

Baker takes exception to such discipline. “Listen,” she says, “after dancing that long in that heat in Texas Stadium, there’s no way I’m going to work out or diet again. I eat what I want. And I know how to make a mean margarita.” 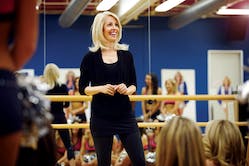 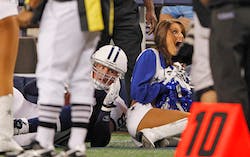 Did the Cowboys Tweet-Block Their Own Cheerleader?