Q: My husband and I were recently visiting his parents’ ranch in Central Texas when he started getting frisky with me one afternoon. The thing is, we were in a smelly barn. He apparently has some kind of fantasy involving “rolling in the hay.” I told him that was just a euphemism and not meant to be taken literally. He was having none of it, insisting that there is something appealing about the idea of making love on an itchy pile of hay in a dirty barn. Texanist, please tell my husband that nobody actually “rolls” in hay.
Name Withheld, Amarillo

A: Thank you for the dirty letter. Before we get started, the Texanist would ask any former Sunday school teachers of his, along with all young children and the infirm or faint of heart, to please excuse themselves for a moment. Thank you. Now, pardon the Texanist for one more second while he knocks back a stiff belt. Ahem. Yes, these days a “roll in the hay” is, indeed, understood to be a euphemism for a casual and quick tryst that need not necessarily take place in a pile of hay. Before there were cars, or backseats of cars, or theater balconies, state park picnic tables, Dillard’s dressing rooms, pickup-truck beds, no-tell motels, and the like, there was the hay. And the hay was as suitable a place as any for consenting couples to engage in impromptu copulative relations. The simple facts of life, in fact, inform us that for as long as humans have been cultivating, harvesting, and storing grasses for the purpose of nourishing their livestock, men and women have “rolled” in those stored grasses for the purpose of feeding the innate sexual appetites that roil within. An attraction to “the hay” is, for this reason, ingrained. And reminders of times when it was more frequently rolled in abound. Who, for instance, hasn’t glimpsed a farm-implement manufacturer’s wall calendar, hung behind the counter of the local feed store, featuring an image of a nubile young woman in a revealingly unbuttoned gingham blouse and a tiny pair of Daisy Duke shorts, gazing out with a come-hither look from a pile of hay in a rustic barn on a hot day? The Texanist knows he has. In the vast pantheon of graphic imagery that objectifies women, the proverbial farmer’s daughter, almost always pictured in or near some hay, sits right up there with the sexy schoolteacher, the sexy librarian, and the sexy nurse.Human progress has, of course, given us a number of superior alternatives to the hay, which has caused it to fall out of favor among libidinous and determined young folk. But perhaps something deep inside your husband was awakened by the visit to the barn. Or perhaps he’d been to the feed store earlier that day. Whatever it was, he ended up with a serious case of “hay fever,” for which the only cure was a “barn dance.” Texas is one of the nation’s top hay producers, and as such, there is often a lot of it lying around. When the conditions are right, some people, like your husband, will still want to “roll” in it. Without qualm. This is natural. Just put a blanket down first. That hay is mighty scratchy.

Q: I was in a used bookstore in Houston the other day and came across a copy of the 1944 yearbook of the “A&M College of Texas.” The name was The Longhorn. Once the initial surprise wore off, a question came to mind. Is the former UT-A&M rivalry of fairly recent vintage? Otherwise, how could this be? I would surmise that the yearbook’s name was an acknowledgment of A&M’s status as a land-grant college, but it is incomprehensible that an A&M publication would be so named today, their agricultural heritage notwithstanding. When I was editor in chief of A&M’s student veterinary journal, I had the cover redesigned and got yelled at because it had too much orange in it.
B. C. Robison, Katy

A: In 1944 the University of Texas Longhorns and the Aggies of the Agricultural and Mechanical College of Texas (renamed Texas A&M University in 1963) were in the heated midst of the greatest intrastate rivalry in the history of collegiate enmity. The mostly good-natured hatred was palpable (as it is in any rivalry worth its salty shouts of derision), and all was jim-dandy among each school’s fan base, as it had been since the late 1800’s. This came to a screeching halt in 2011, when the Aggies bowed out (and with the overall football record against the Longhorns at 37-76-5, who could blame them?) and joined the Southeastern Conference. The residual animosity lingers a little bit, but the ol’ gray mare, as they say, ain’t what she used to be. So tepid has the rivalry gotten, in fact, that the Texanist wouldn’t be surprised to see a Longhorn steer moseying across the A&M campus unmolested. This saddens the Texanist.

The A&M yearbook began carrying the Longhorn brand in 1903, when the collegiate conflict was in its infancy. In retrospect, the name seems like an odd choice, but prior to 1903 it was known as The Olio, which is not, they say, a misspelling of “oleo.” Why The Longhorn? Well, it is said that a set of twin sisters, the daughters of an English professor, came up with the idea to change the name after there had been a hiatus in The Olio’s publication. The new name lasted for 46 years, until the students came to their senses and, by a vote of two to one, decided to change the name to Aggieland. With the sad shape that the once beloved rivalry is in today, it wouldn’t surprise the Texanist if a proposal to change the title back to The Longhorn was met with a hearty “Whoop!”

Q: I enjoy grilling thick steaks and smoking large slabs of beef while drinking a cerveza or some red wine now and then. Recently, one of my compadres claimed superior results from cooking meat in a vacuum-sealed plastic bag in a thermostatically controlled tub of hot water. Does the Texanist find this as disturbing as I do? Will I drive out to my favorite barbecue joint in Llano one day and find the briskets swimming in a hot tub?
R. C. Burnett, Houston

A: You are not crazy for thinking that the Texanist would cringe at the prospect of his meat being hermetically sealed in a plastic bag and then submerged in heated water, but in truth, he is more open-minded than he is sometimes thought to be. This is especially true when it comes to foodstuffs. The sous-vide (French for “under vacuum”) cooking technique is a foreign style with which the Texanist has no experience whatsoever. But it is as you have described it, with the practice being that the meat, once sealed in an airtight plastic bag, is then plopped into a pot of water, which has been outfitted with a device that heats the water to a desired temperature. Eventually, anything you drop into it (no matter how thick, thin, or uneven the cut may be) will reach that temperature throughout—not a degree more and not a degree less. Flawlessly cooked meat, fans say. The problem is that the method ignores thousands of years of tradition. Where are the benefits of searing and charring over a smoky and aromatic hardwood fire? Where are the benefits of standing around that fire drinking a beer while sometimes forgetting to turn the meat but who cares because it’s so nice out on a summer’s eve? The Texanist is not going to give up his fire anytime soon and can’t see the pit tenders of Llano doing so either. Sous-vide may render meat to a state of perfection, but it’s a bit newfangled and tidy for his taste. This is how they cook meat in France. For further advice, you might consult the Parisianist. 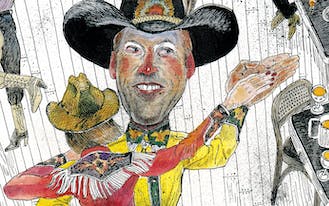 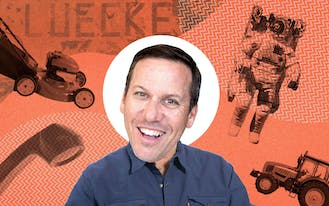