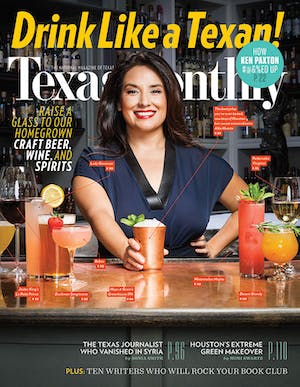 Q: I’m a seventeen-year-old straight-A student, devoted church member, and decent two-stepper who comes from two old West Texas ranching families. My only problem is that I’m lonely. All of the boys in my oil-patch hometown are loath to get any dust on their high-dollar sneakers and seem oblivious to the charms of the back roads. Do you have any suggestions for picking the country boy of my dreams out of the herd?
Name Withheld, Andrews

A: The Texanist is sorry that you are lonely and at your wits’ end there in Andrews. But he’ll have you know that as a seventeen-year-old back in eighties-era Temple, he was himself no stranger to occasional bouts of desperation in the small-town romance department. One of the downsides of growing up in a sparsely populated area is that the pickings can be slim—and way out Andrews way, exceptionally far between too. Being a pedigreed West Texan with high standards and passable dance floor skills ought to have worked in your favor by now. In examining your note, the Texanist keeps going back to your appraisal of the homegrown stock. Andrews sits in the heart of the Permian Basin, where oil-and-gas and farm-and-ranch work put food on the area tables. How such a petrograrian setting could be completely devoid of dusty boot–wearing gentleman callers with an eye for a like-minded young woman is, to put it mildly, odd. No, something else is amiss. After much thought, the Texanist has concluded that the loop of your proverbial lasso needs to be enlarged and your cast extended a bit. A wider net almost always worked for the Texanist back in Temple, and it’s certain to work for you too. Be sure to throw it big and far enough to include the livestock barns where the 4-H boys hang out, Main Street between the Stripes and the Sonic on Friday nights, and both Andrews’s annual Wild, Wild West Fest and the Sandhills Stock Show and Rodeo, in Odessa, as well as all the other nearby rodeos and associated dances. You may have to cut a few roughnecks, roustabouts, and no-accounts loose, but the Texanist bets you’ll be in business before you know it. If, however, after a dozen or so throws, you are still finding Andrews too full of fancy shoes, Lamesa lousy with lame-os, and Notrees with no boys, reach out to the Texanist again and he’ll be glad to help you with your technique.

Q: Is the State Fair of Texas worth visiting? It seems like it would be fun, but I live in South Texas and it’s a long way to drive.
Missy Rocha, Corpus Christi

A: Is the . . . ?! Is the . . . ?! Is the STATE FAIR WORTH VISITING?! Are you pulling the Texanist’s leg? Is the Texanist on Candid Camera? Is the Texanist being punk’d? You are lucky that the fair isn’t ongoing at the time of this writing (it runs from September 25 through October 18), because if it were ongoing at the time of this writing, the Texanist would wash down a mustard-slathered Fletcher’s corny dog with a big cup of bubbly State Fair beer and then, in one very long, Big Tex–size belch, let you know all the reasons why a visit to the fair would indeed be worth your while—no matter your particular while’s worth. Hang on one sec. The Texanist thinks he can make this work with what’s left of his lunch. The Texanist is eating at his desk today. He’s having a bologna sandwich, Fritos, a pickle, and a Dr Pepper. Please bear with him for one moment longer. Hold on. Okay. And please excuse the Texanist in advance. He normally wouldn’t do this outside the confines of Fair Park, but these are special circumstances. Okay. Ready? Here goes:

The Texanist apologizes. It appears that he overestimated his burping ability and underestimated the number of reasons to visit the State Fair of Texas, all the way up there in Dallas. He trusts you caught his drift, though. Have fun at the fair. And have a corny dog and a beer for the Texanist.

Q: What happens to bucking bulls and bucking broncos after their rodeo careers are over?
Callie Brown, Dallas

A: After that final gate has been flung open and they’ve thrown their final cowboy to the arena floor and tried to stomp and gore him to kingdom come, most rodeo bulls are retired to stud, their seed being highly sought after by breeders of today’s pricey bucking bulls. For instance, the greatest rodeo bull of all time, former Stephenville resident Bushwacker, retired to California last year, where he currently shares a verdant pasture with no fewer than 21 girlfriends. It’s a little different with the broncs, as the majority of these horses are geldings (although some are mares), unable to enjoy post-rodeo life with the same sort of “recreation” as the bulls. Under the care of a good owner, these brawny beasts of the “rough stock” events, as they are collectively known in rodeo parlance, get to live out the balance of their lives enjoying a not-so-rough retirement. The old rodeo cowboy, after the sun has set on his career, should be so lucky.

Q: I was born in Detroit, grew up in a nearby suburb, and worked as a print journalist after college. While seeking browner pastures in 1975, I took a job in Lubbock and eventually started teaching my way around the old Southwest Conference—Texas Tech and UT-Austin—until I finally settled at SMU for more than two decades. I write in hopes that you can shed some light on a word I’d never heard up north: “tump.” A friend in Austin and I were getting ready to go fishing. His boat was sitting in the yard and had rainwater in it. He asked me to help him “tump” it out. Your wisdom on this matter would be greatly appreciated.
Don Umphrey, Dallas

A: “Tump” is a real word. It can be found right there between “tubin’ ” and “turd-floater” in the Dictionary of American English, Lone Star Edition. It can also be found in other actual English-language reference books, where it is identified as being “chiefly Southern.” This explains why you never “tumped” over a canoe out on Lake St. Clair back yonder in Detroit. But while “tump” is a real word, it is not an old word. In fact, the Texanist, born in 1966, barely outdates its first known use, which occurred in 1952. The word’s exact origin is unsettled. Merriam-Webster thinks it may be related to a word of British dialect, “tumpoke,” which, according to that dictionary, means to fall head over heels. The Texanist thinks it is most clearly defined as a portmanteau of “tip” and “dump,” which is precisely how you and your compadre got the water out of his boat that day as y’all were fixing to go fishing.

The Texanist’s Little-Known Fact of the Month: Just outside the Capitol’s south entrance, a small five-pointed star is embedded in the center of the sidewalk, crudely fashioned from pieces of brown and yellow ceramic with a sky-blue center. Nobody knows how long it has been there, who placed it there, or the strange little folk-art star’s significance.