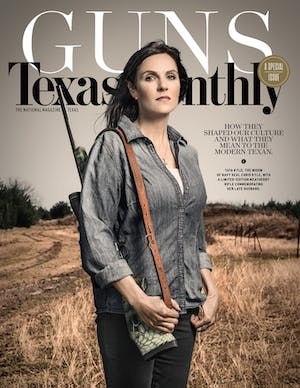 Q: I grew up in Ohio but have happily called myself a Texan for more than thirty years. I do not currently own any guns, but in light of the times in which we find ourselves, I’ve been thinking about arming myself and even getting a license to carry. My wife insists that this is a bad idea. I seek your counsel.
Name Withheld, via email

A: Arming oneself with the goal of personal safety in mind is a decision that shouldn’t be taken lightly, so the Texanist is glad that you have reached out. While he is not officially licensed to make determinations about a person’s gunworthiness, he’s gotten pretty good at sizing up the folks who cross his path. Unfortunately, considering that he doesn’t know your name or physical location, other than being somewhere in the 268,596 square miles of Texas vastness, he will be unable to make a ruling today. So as not to leave you hanging, though, the Texanist will tell you that, personally speaking, he is a man who favors the sunny side of the street and doesn’t find the times so bad as to call for the mass toting of guns. This is not to say that guns shouldn’t be toted. The Texanist has toted occasionally since he was a young man, but his shooting has always been done in the pursuit of recreation. Of course, it is your right to buy a gun, regardless of the reason. But just because a person can do something doesn’t mean that person ought to do something. For example, the Texanist knows many old boys and girls who tote guns who, for a variety of reasons, he wishes didn’t. The Texanist is sorry to have been unable to give your plan a stamp of approval, but he just doesn’t have the information to do so at this time. Until further notice, he would encourage you to listen to your wife, a person who is better equipped than anybody to size you up properly.

Q: Of all our neighboring states (and Mexico), which one is most preferable as a destination for a quick long-weekend getaway?
Erica Wall, Brownsville

A: Choosing between Oklahoma, Arkansas, Louisiana, Old Mexico, and New Mexico as a place for a vacationette will hinge upon what you’re most looking to get out of your short time abroad. The Texanist has had good times in all of these spots (except Oklahoma), and each has its own draw (except Oklahoma). The Texanist cannot speak for Oklahoma, as his personal experience there is limited to once spying it from the Tex side of Lake Texoma. And, after all, he’s the Texanist. Moving on, clockwise from there, the Texanist once had dinner at a Pizza Hut outside Little Rock while shuttling Larry L. King to Austin from his home in Washington, D.C. The joint was pleasant enough, but it was mostly uneventful. But Hot Springs, a place known for its relaxing thermal waters and famous bathhouses, sounds quite refreshing. The Texanist has always wanted to visit Hot Springs. Singing the charms of Louisiana is probably unnecessary, so the Texanist will forgo a serenade and just say that New Orleans is one of his favorite cities the whole world over. You should check out a short piece that ran in the May 2014 issue of the magazine for which the Texanist tricked his bosses into sending him to the Crescent City on a train. It was a fine time, although the Texanist drank too much. As a Brownsvillian, you must be familiar with the goings-on south of the border, but if you are okay with taking a flight for such a short trip, there are many relatively safe Mexican options to consider. The Texanist’s brother-in-law just got back from Tequila, Mexico. He reported that this charming little city’s namesake export flowed like water—that you could actually drink. The Texanist really wants to go there someday too. This brings us to the Land of Enchantment, where the Texanist has enjoyed shopping for dreamcatchers in the wafting piñon smoke, as well as eating the strange yet tasty flat enchiladas found there. If this sort of thing is up your alley, you might think about New Mexico. Your adventurousness is to be applauded, and the Texanist is sure you’ll have a great time wherever you decide to go (except Oklahoma).

Q: I recently moved back to my beloved Lone Star State from Kansas City, Kansas, beckoned home by the inability to get tamales in the Midwest. Sadly, upon my return, my cultural senses have been shocked by the number of people who insist that eating them with salsa, chili, or even ketchup is acceptable. To me this is as heretical as beans in chili. I can’t help but feel that Texans are losing their way and need to be strongly reminded that the only true way to eat tamales is dry, right out of the husk. I want to resolve this ongoing debate among friends and co-workers once and for all. Am I being too puritanical?
Matt Obenhaus, Lubbock

A: Except for the most heinous offenses, such as beans in chili or so-called chicken fajitas, the Texanist has a mostly to-each-his-own attitude with regard to how a person prefers to take his chow. In his lifetime, he’s witnessed people eat such strange things as peanut butter and mayonnaise sandwiches, Shiner Bock floats, and perfectly fine ribeyes drowned in steak sauce. The Texanist’s own dad, oddly enough, used to put ketchup on his chili. And one time he saw Doc, the old waiter and raconteur at Dirty Martin’s, the historic hamburger dive in Austin, eat a cup of ice cream into which he had stirred a paper napkin. These sorts of things sometimes cause the Texanist to look on with confusion or nausea, but they rarely raise his hackles. You are absolutely right on two counts: Everybody should eat tamales outside of the husk, and putting ketchup on tamales is weird. But the Texanist also believes that dry tamales can be aided by a moistening agent. A little chili or salsa or grated cheese or sliced onion or jalapeño (or a combination thereof) can enhance the tamal-eating experience. So you might lighten up a little bit on your friends and co-workers. For the Texanist’s money, the best tamales are the classic pork variety, piping hot and slithery with a coating of electric red-orange grease. Washed down with a frosty beer or cold Big Red, they require nothing, not even chewing.

Q: Due to the hard work of my wonderful husband, we lifelong city slickers have been fortunate enough to buy a little slice of heaven in the Hill Country. This jewel was part of a larger family estate and, therefore, is not fenced on all sides. More than once while enjoying our Hill Country hideaway, we have encountered a stray cow. We don’t want to fence the property and give the neighbors any sense that we are not welcoming, so what is the proper protocol when encountering lost livestock on your property? Call the pound? Put up posters on light posts? Or should we invite the neighbors over for a steak dinner?
Linda and Jon Trial, Austin

A: Before you fire up the grill, the Texanist would recommend familiarizing yourselves with the Texas Agriculture Code, particularly Section 142.003 and its associated subsections. There you will find that the lost cow (the thought of a “Found Cow” sign made the Texanist chuckle) that grazed its way onto your property is now considered an estray. Rather than putting out a salt block and naming the lost bovine, you are instructed to notify the local sheriff’s office. Estray livestock are a common enough occurrence that most counties will even have an estray unit, who will help you help ol’ Bessie find her way back home. You’ll also learn that, depending on the circumstances, you may be due a little compensation from the cow’s owner for your efforts (Section 142.006). The simple country life can sometimes be complicated, but thankfully not that complicated if you know where to go for assistance. Hope this helps. And having the neighbors over for supper is never a bad idea. Go ahead and bang the triangle.

The Texanist’s Little-Known Fact of the Month: Upon hitting a can with a .22 rifle while being trained by husband and San Antonio sharpshooting sensation Ad Toepperwein in 1903, Elizabeth Toepperwein exclaimed, “I plinked it!” She was soon after known as Plinky, one half of the “world’s greatest shooting team.” Today, the verb meaning “to shoot at random targets in an informal and noncompetitive manner” is “plink,” and for this we can thank Plinky Toepperwein.