On January 1, 2006, Houston activist Monica Roberts published her first post on TransGriot, the Blogspot-hosted site she launched to cover transgender issues from her perspective as an African-American trans woman, which she had covered extensively in The Letter, a LGBT paper in Louisville, Kentucky. Thirteen years later, the blog has become an indispensable source of news about a community whose stories are still under-reported. Last year, she won “Outstanding Blog” in GLAAD’s Media Awards, and her work—which covers politics, race, gender, gender identity, and more—made her the subject of a Daily Beast profile on February 19.

A few hours after that profile was published, Roberts’s blog disappeared from Blogspot. “I got a hint when one of my friends sent me a message saying, ‘Where’s your blog?’ I go to sign in, and there’s a message saying that they’ve removed my blog. No note from Google, nothing,” Roberts says.

According to Roberts, Google, which owns the hosting service, did not offer much explanation to her about why the blog was removed on Tuesday. A few hours later, it was restored—but the following day, it was removed again. It was quickly restored, but has created uncertainty about whether Blogger is a stable platform for a long-running, award-winning blog.

Google Communications responded to a request for comment from Texas Monthly on Tuesday by linking to a tweet they sent to Roberts on Tuesday night, stating that “the blog was taken down in error earlier today” and offering an apology. A follow-up request to ask how the error recurred did not receive an immediate response.

Roberts suspects that the incident was related to the profile in the Daily Beast, which described her work to identify transgender murder victims, bringing community knowledge to crime reporting. (Frequently, transgender people who are killed are identified only by the name that appears on their birth certificates, which may not be the name that they used in their daily life. Those who know them can provide context and possible leads in the pivotal first hours of a murder investigation.) She suspects that the article also made her a target for people who insist that transgender identities are illegitimate.

“I think those things are connected,” Roberts says of the timing of the blog’s removal. “It’s very interesting that my blog goes down hours after a positive profile of me. I suspect that they had a bunch of folks file false complaints to get it down.”

Roberts says that the entire incident has her thinking more carefully about who hosts her materials.

“It’s really got me thinking about that now,” Roberts says. “It looks like my full archive going back to 2006 is still here, and it’s backed up in numerous spots, but I’ll be doing more frequent backups of it going forward. But I’ve been on Blogger since it started, and this is the first time I’ve ever had any issue like this with them, which is what leads me to believe that this was not an accident.”

This isn’t the first time Google has deleted a long-running blog without contacting the owner. In 2017, writer Dennis Cooper saw his site removed for violating an unspecified term of Google’s service. Since Roberts’ site was restored and she received no explanation besides “taken down in error,” she wonders if it’ll happen again, and if she was targeted by groups that may have gamed Google’s system.

Either way, whether on a Google-owned hosting service or elsewhere, she’s undeterred in her mission.

“Yeah, they got it down for a couple hours,” Roberts says. “But all you did was piss me off enough to ensure that I’m going to make sure this blog stays alive for my next anniversary on New Year’s Day 2020 and beyond.” 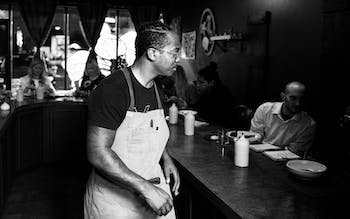