Texas Monthly‘s Christmas cover star was also The Late Show with David Letterman‘s before-Thanksgiving guest. Watch the video above to see Willie–who is promoting his new autobiography, Roll Me Up and Smoke Me When I Die-talk about how he wrote “Crazy,” “Night Life,” and “Funny How Time Slips Away” in the same week.

“The original title was ‘Stupid,'” Nelson joked of his most famous song, before relating how it ended up in the hands of Patsy Cline.

Be sure to watch the whole three minutes, or you’ll miss Dave’s kicker. You can also watch the full episode–which coincidentally features another Texan, Gary Clark Jr., as the show’s musical guest–here. (That’s right, Willie’s so famous he doesn’t even have to play to hit the talk show circuit.)

Michael Hall’s December Texas Monthly double feature, which includes a Q&A with our “Red Hooded Stranger” and a profile of the life and times of his guitar, Trigger, is currently available online to subscribers. The issue is also on stands. Look at that cover! How can you resist?

In the meantime, everyone can check out Andrew Shapter’s accompanying documentary film, Trigger. Right now, in fact: 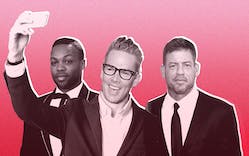 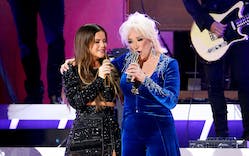