I’ve got a two-and-a-half year old son named Willie Mo. We live about a mile from UT, and one of our favorite ways to hang on the weekends is with him in a seat on the handlebars of my bike while I cruise around campus. I sing Willie Nelson songs to him and point out buildings where I went to class in the eighties, and he shouts “Bevo!” when he sees longhorn silhouettes on street signs and UTPD cop cars. We call it “going to look at colleges.”

He figured out the significance of fall Saturdays early. On game days we ride to a tailgate just south of the stadium, and as we wind through the sea of Horns fans walking in, a nascent awareness of community bubbles up out of him. “That’s lots of orange,” he’ll observe. When we get to the tailgate, friends who might as well be family holler, “Willie Mo, you made it!” and sneak him sweets he doesn’t get at home. One Saturday we arrived early enough to see the band and players walk down 23rd Street to the stadium. He was especially impressed with the trombones and Malik Jefferson’s hair. But since he has nothing near the attention span required to sit through games, we head home to watch them in the basement and eat pizza. It’s become a ritual for us. If he sees a football game—any football game—on TV, he’ll stop everything and yell, “Look, the Bevos!”

Charlie Strong had been the Horns’ head coach for five months when Willie Mo was born in May 2014, a fact that didn’t much matter to me at the time. I scarcely went to games as a student and almost never as an alum; I used to joke that I’d never noticed any football players rooting for me when I took tests, so why the dumb, blind allegiance? At the 2006 Aggie game, which Texas Monthly sent me to cover for a possible Colt McCoy profile, I fell asleep in the press box.

My mind took a turn when I became a dad. I thought about all the games I’d watched on TV with my father. That was our time. As a kid I lived and died with the Horns, had Earl Campbell posters on my wall and a special desk drawer for cherished items like the Erxleben and McEachern autographs I’d gotten at a charity basketball game they played at my middle school. I remembered an elevator ride my dad and I once took with a quiet, older man and how, when we arrived at the ground floor and the stranger got off, my dad held me back and then said with great reverence, “That’s Coach Royal.”

When Willie Mo was born I started watching the Longhorns through his eyes. Coach Strong made headlines that summer and fall—and caught a good amount of flack—for dismissing players, some of whom had been significant contributors. A narrative emerged of a culture of entitlement that had brought the program down in recent years. Whether that was accurate or not, a corollary storyline developed of a new coach with a clear set of standards that his players had to meet. The core value of Strong’s that leapt out at me was “Treat women with respect.” When two of his players were charged with sexual assault after being accused of raping another student, both were suspended indefinitely. One player was acquitted after mounting a defense that the sex was consensual. The other player then saw his charges dropped. Neither player was invited back to the team.

There’s no doubt that some of the banished players and disgruntled transfers could have helped a 2014 team that limped to a 6-7 finish, topped off by an embarrassing Texas Bowl drubbing by Arkansas. But then a funny thing happened. Strong secured a top 10 recruiting class anyway. Stellar athletes were buying what he was selling. The 2015 season was even more disappointing, a 5-7 slog featuring gut-wrenching nail-biters that seemed given away, inexplicable blowouts, and no bowl game. Yet last winter, Strong finished in the top 10 in recruiting again.

And then came this season. No Horns fan is satisfied with our record. But every defeat but one went down to the wire. Of course that’s nothing to trumpet when you’re a storied program and one of the losses is to Kansas. But still it indicates real progress. This is a team making strides squarely in the right direction—and a shockingly young team at that. The defense, which completely turned itself around once Strong took the helm, starts eight sophomores. The offense, which mixed flashes of brilliance with predictable hiccups under first-year coordinator Sterlin Gilbert, is anchored by a true freshman quarterback taking snaps from a true freshman center and throwing to a receiving corps featuring just one senior. So many of the mistakes that hurt this year’s team can be chalked up to that youth—the overconfidence after the 2-0 start, the skittish play of the defense as the roof seemed ready to fall in midseason, the bonehead penalties that extended opponents’ drives and killed our own. Strong’s Longhorns were green and often played like it.

Using youth as an excuse will not help Strong’s cause, but all those underclassmen point to the real reason UT should bring him back. With 37 of 44 players on the two-deep chart slated to return, next year’s team will be ready to break out. Strong has loaded the program with monsters, players that will almost certainly wind up All-Conference, and possibly All-American and high NFL draft picks: Jefferson, Shane Buechele, Breckyn Hager, Charles Omenihu, Malcolm Roach, Connor Williams, Zack Shackelford, Chris Warren III, Collin Johnson, Michael Dickson. It’s interesting that with all the criticism dumped on Strong in recent weeks, no one’s taken issue with his assertion that next year’s team will win ten games no matter who is coaching. If he can bring in a special teams coordinator on par with Gilbert, Strong would be the best bet to pull that off, given how much his players love him. That would put the Horns back in the top 10. And the recruiting classes he’d amass after returning Texas to the national conversation would be terrifying. He’s built the foundation for a long run of the excellence that Horns fans expect.

That is the reason to retain him. It’s not that he deserves a fourth year to see his first recruits through to graduation. It’s not that he runs a clean program or that he focuses so intently on the character of the kids and getting them diplomas. Football is about winning, and at UT that means national championships. Charlie Strong will win them.

So even with all the noise this week about how UT has already decided to make a change, I can still imagine sitting at DKR ten years from now with Willie Mo and his little brother, Leon, watching a team coached by Charlie Strong. One of my boys will ask for the story again about how Coach Strong once suffered through losing seasons and almost got fired. I’ll tell them how the first three years were indeed tough, but that Strong knew who he was and what he was doing, that he didn’t take any shortcuts or compromise his principles to build his team. The lesson will be that doing things the right way takes time, and the proof will be on the field.

It’s a lesson my sons would benefit from, as could a generation of athletes who’d play for Strong in the meantime. And it’s one that the big-money boosters intent on driving Strong out should be considering now. 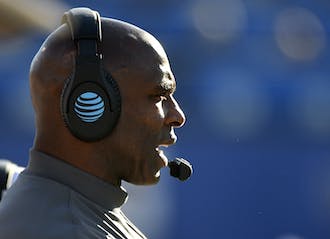 If Charlie Strong Is Out, Then What? 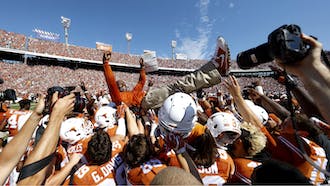 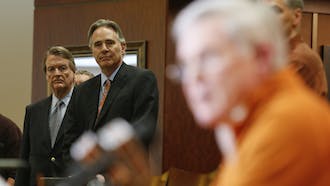 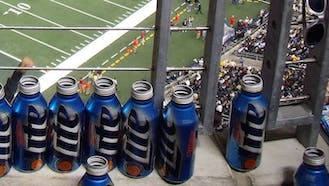