DEEP ELLUM IS PFFFFFT—IT’S not the underground anymore,” a salesman in a Montrose vintage-clothing store says with a sneer, as if his locale were any different. Here in Houston the fabled Westheimer strip—the blocks of Westheimer Road east of Montrose Boulevard—is quiet, pretty much cleared of seventies-era chicken hawks and their prey, along with the once-ubiquitous Oriental modeling and massage studios. All that remains of the formerly-thriving gay scene of the eighties is a postmodern AIDS clinic and a few enduring bars and restaurants. But look west—down Westheimer from the Montrose intersection toward Shepherd Street—and you see a new zeitgeist in full swing. Where else is a street bracketed at one end by the Erotic Cabaret, which provides one-stop accessory shopping for sexual adventurers, and at the other by the Ohio Grange Cafe, a restaurant that features ersatz home cooking under a mural of farmers chowing down after a day in the fields? Decades come and go, but Westheimer still manages to tell you what’s going on in town.

If you don’t believe the social scientists and psychologists who insist we’re experiencing a blurring of all boundaries—geographical, social, cultural, sexual, even those between past and present—come on down to this section of the Montrose, where you can have it all. Parts of Houston and the world may be balkanized into gated communities, but here prosperous gays dine next to families with testy babies, and River Oaks teens shop for dog collars and handcuffs. It’s worth spending a sunny day poking through the shops and sampling the restaurants just to keep in touch.

The best way to explore the changes here is to make a loop, starting with a cup of coffee at the Empire Cafe (1732 Westheimer), partly because it’s good and partly because the place is the creation of Smoot Hull, the thirtysomething entrepreneur who’s most responsible for altering the character of this stretch of Westheimer. Hull, a native Texan back from a sojourn in California, opened the Empire in 1994 and transformed what had been a pretty rough gay bar into a Generation X—yuppie mecca. Comfortingly cool—wood blinds, polished wood tables, burnished concrete floors—the Empire was gentle in the morning, sultry in the afternoon, and hopping at night. The place made it easier to while away a few hours haunting the nearby junk stores too. Stretch your legs west these days and you can see how one thing led to another: As you move toward River Oaks, the offerings get pricier, more seductive, and depending on your attitude toward the adventure of junking, easier or too easy to find.

Collectors of Arts and Crafts furnishings and architectural antiques will wonder how they ever lived without the Emporium (2515 Morse, just off Westheimer) and how, once they’ve found it, they will ever be able to support their habit. If you have an older house, this rambling two-story space has everything you’ve ever wanted to restore or replace, from bath fixtures (twenties bathtubs, forties sinks, period reproductions) to windows and doors and even columns for your Craftsman bungalow or River Oaks swankienda. A recent best buy: a lovely set of bentwood chairs with cutout backs for $75 each. Old snowshoes and ice skates are also featured here, ostensibly for decorative purposes, though in Houston their evocative powers would seem somewhat limited.

Saunter a couple of blocks farther west to another small collection of shops and pop into Aesthetics (No. 1846), a relatively new store whose one-of-a-kind items speak more immediately to local nostalgia, particularly the surprisingly tasteful tables made from old manhole covers. You have your choice of Austin (decorated with a Longhorn), City of Houston (a locomotive), or Bellaire (the word “sewer”). The prices—$1,100 to $1,700—might tempt you to grab one off the street.

Wit is also in evidence at Kay O’Toole Antiques and Eccentricities, half a block west and across the street at No. 1921. She isn’t kidding about her hours, which are listed as Tuesday through Saturday, eleven to five—“Maybe.” O’Toole, like most area proprietors, is casual about time. But if there is a more clever antiques shop in Houston, I have yet to find it. French garden chairs nestle next to Mexican santos; stone sheep graze in her backyard garden. Check out the mirrored art deco curtain tiebacks—breathtaking but, at $1,125 for six, also breathtakingly priced—and the dainty yet stolid ironstone basins for $150. Everything is well worn and nothing is pretentious here, which has made O’Toole a favorite of the anti-glitz crowd. (Items deemed inappropriate for her clientele are described as “too fresh.”) My particular favorite: room screens fashioned from old tin ceilings, something you’re not gonna see in Met Home anytime soon.

Adjacent to Kay O’Toole is Smoot Hull’s latest venture, the Ohio Grange Cafe (No. 1915), located in a flawlessly renovated thirties shopping center. Hull has once again created a room that beckons—sun-drenched windows reveal the passing street parade, a pressed-tin ceiling and rosy decoesque lights provide warmth and comfort—and no surprise, the restaurant is properly packed (do not even try to get a table on a Saturday night). If only the food would catch up to the decor. The stick-to-your-ribs menu can leave weight watchers bereft of choices, and the homey-sounding meat loaf sandwich ($6.75) that recently arrived at our table had a less than comforting pallor. The biscuits and cornbread, however, held out the promise that Hull will get his menu up to the standards of the room.

Next door in the same center is Quatrine (No. 1911), part of a national chain that offers a seemingly infinite selection of overstuffed chairs, sofas, and ottomans with washable but fashionable slipcovers in the Pottery Barn mold, only—naturally—higher in price. Don’t miss the cozy double chaise that starts at $1,620—no one has been married too long to snuggle in this. Move on to Diedrich Coffee (No. 1901) for the soothing fountain and garden, the scones, and if you’re toting a little one (not always the best idea in this anything-goes neighborhood), a gingerbread man.

In fact, the Westheimer Flea Market (No. 1733, back across from the Empire) requires some fortification. With all the dust and mold and ravaged Barbies the name implies, it offers truth in advertising. But just when you think you’re too old for this sort of thing, you might stumble upon a set of four genuine Arts and Crafts dining chairs, a steal at $275. (Note the not-for-sale high school gym locker stickered with “Thuglife Sooooooooljah”—a nineties conversation piece if ever there was one.)

Scented candles are a big thing in the shelter magazines these days (they’re post-apocalyptic and sensuous at the same time) and therefore on Westheimer too. Kay O’Toole and Aesthetics have variations, but the nicest and most economical can be found at Cut Loose (No. 1711), a hair salon that also sells Aveda’s all-natural products. Choose from five tiny candles for $25 or a larger, cup-size version of the best scent, the cinnamony Madagascar, for $12.50. On one side of Cut Loose you can check out the period jewelry and accessories at Eclectic Appeal (No. 1713)—triangle-shaped Armani-rivaling eyeglass frames can be yours for a mere $15; on the other side you can relax at Brasil (No. 1703), another (it’s the nineties!) coffee bar that is starker, airier, and less sentimental than the Empire.

It’s also fitting on this you-can-have-it-all strip that A Cigar Attitude (No. 1544) sits across the street from the Texas Hemp Company (No. 1533). One store (guess which) offers sixties-era “water pipes” and copies of High Times along with utilitarian shirts, dresses ($70 to $230), and overalls made of natural fibers including, well, hemp; the other features an owner who insists, in the best nineties retro manner, “Smokers can breathe free here.” A Cigar Attitude sells cigars ($1.50 to $10.50) that are handmade in a Key West, Florida, factory from tobacco grown from Cuban seeds. Also in harmony with these politically incorrect times, you can bring your own liquor and smoke at the bar, sampling not just cigars but clove cigarettes, Gitanes, and other imports.

The service stretch of the street is located east of the Dunlavy intersection: Here you can rent skates, get a tattoo, or have your navel pierced, as well as shop for vintage clothes, newly trendy but also a mainstay of this part of Westheimer. The classic vintage-clothing shop is Wear It Again Sam (No. 1411), a cluttered monument to recycled chic. Amid one crowded rack, an original sixties Pucci pantsuit (they’re baaaaaack) for $220 hung next to a stunning beige satin sheath ($85) by famed fifties designer Teal Traina (Calvin Klein, eat your heart out). Wear It Again Sam also stocked plastic pillows from the sixties by Peter Maxx and Robert Indiana, must haves starting at $25. Blue Mambo (No. 1401), a hair salon, also offers bargain-priced up-to-the-minute vintage and new clothes—Pucci clones, diaphanous sheaths, and tiny T’s that are favored by local teens probably because they are the only ones, besides their little sisters, who can wear them.

Close to Montrose, the once-pervasive sexuality of the strip still endures. The Crossroads Market (No. 1111) is a hetero-friendly gay bookstore and (yes!) coffee bar catercorner from Mary’s Lounge (No. 1022), the grandmother of all local gay bars, and Charlie’s Coffee Shop (No. 1102), which remains something of a late-night alternate universe in the classic Montrose vein. Gut up and visit the Erotic Cabaret at No. 1222, a distinctly hetero sex shop that is pretty PG, unless you get involved in a discussion with one of the salesgirls on the relative merits of the store’s handmade Victorian corsets ($298 and up). Great bathing suits—a fruit-patterned two-piece for about $50 evoked Todd Oldham—and beaded party dresses (a steal at $159) compete with the bondage kits ($20 to $125) tucked discreetly in the back of the store. Don’t miss the lingerie museum, which showcases a black bra that once belonged to Zsa Zsa Gabor.

Continuing back toward the Empire, the Rojas Gallery at No. 1614 has wonderful contemporary variations on the tile-it-yourself tchotchkes of the sixties—check out in particular the keepsake box ($230) and jaunty bedside table (about $600) recently featured in the window. Both AJ’s Antiques (No. 1616) and Flashback Fun-tiques (No. 1626) are worth a look for reasonably priced forties-through-sixties collectibles—signs, lamps, tables, and chairs—but shop quickly. The last time I checked in at Flashback, two New Yorkers with matching navy outfits and fashionably shaved heads were buying like crazy—and someone had already beaten them to the best stuff. As the owner remarked with a world-weary shrug, “The Japanese buy it all”—even, it seems, on Westheimer. 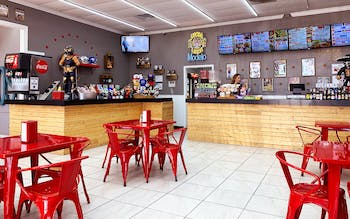