A week ago, Alex Jones had 2.4 million YouTube subscribers, more than 2 million Facebook fans across his various pages, and loyal listeners on Spotify and Apple’s Podcasts app. Now, he’s lost them all. After Spotify removed all of Jones’s podcasts from its platform over the weekend, other tech giants followed suit. On Monday, Apple removed Jones’s podcasts from its servers for violating the company’s terms of service, Facebook deleted four pages connected to Jones and his network, and YouTube banned Jones from its platform after giving his channel its third “strike” for violating its policies around hate speech and harassment.

Jones, who built his brand around conspiracy theories and a sense of persecution, has reacted by railing against the conspiracy from “radical left-wing tech giants run by deranged, mentally ill communists” out to silence him, which is no new claim for the pundit. But Jones’s complaints now will reach a far smaller audience.

Infowars, Jones’s site, has significant reach: as Vice reported, it has an average monthly unique visitor count of 3.6 million, which makes it the 817th most-visited site in the U.S. But the recent changes may have significant impact on those numbers. According to Amazon’s Alexa internet metrics, two of the top four sites referring users to Infowars.com are YouTube and Facebook. Under the ban, Jones won’t be able to stream or post videos on the two platforms, although Facebook users will still be able to share Infowars links with their friends.

And Jones still has his radio show, which he claims is syndicated by more than 160 broadcasters nationwide—but he’s the only one saying that. Jones doesn’t list the stations on which his show is broadcast, arguing that if he provided a list, then people could threaten boycotts of advertisers and pressure the stations that air him to drop his show. But hiding the list also allows Jones to make a claim that’s hard to challenge.

In March, the website KnowledgeFight.com—home to a podcast of the same name dedicated to analyzing Jones–dug deep into those numbers, analyzing how often Jones appears on talk radio stations. Using a list provided in 2014 by Genesis Communications Syndicate, which distributes Jones’s show to affiliates around the country, the site noted that Jones’s reach was roughly half of the 160 stations he claimed at the time—just 83 stations. Looking at the broadcast schedules for each of the stations listed, they found that at least 42 of them no longer have Jones’s show on their schedule at any time or day. That leaves 41 stations, plus one additional station, owned by IHeartRadio and broadcast out of Los Angeles, which KnowledgeFight.com found airs his show at midnight, Monday through Friday.

Jones’s show isn’t carried by any stations owned by industry giants Cumulus or Entercom Communications, and he appears on only the one station owned by IHeartRadio. Most stations within those networks work with larger syndication companies than Genesis, which distribute shows hosted by conservative figures like Sean Hannity, Rush Limbaugh, and Glenn Beck, but not Jones. Of the 42 networks that do broadcast Jones, fewer than a dozen of them do so during daytime hours—and of those, four of the stations are based out of tiny markets with fewer than 5,000 people. In the major and mid-sized markets that carry Jones at all, whatever listeners he has are most likely tuning in in the middle of the night, often to small stations broadcasting from dozens of miles away.

Despite losing Facebook, YouTube, Apple’s Podcasts app, and Spotify as platforms, Jones is hardly off the internet entirely. Twitter, which has long been hesitant to issue permanent bans of high-profile figures, still maintains a verified account for Jones, where he has more than 800,000 followers and still hosts video content (albeit in nine-minute bursts, rather than the three-hour shows he would put on YouTube). And Apple’s podcast ban doesn’t apply to other content in the App Store—the official Infowars app is currently the number 4–ranked product in the “news” category.

And then, of course, there’s Jones’s own platform. As Jones’s business model has shifted away from selling content and toward selling dietary supplements, he’s focused less on the ways that media figures typically monetize their product; in the past, Jones spent much more energy on encouraging fans to subscribe to his $5.95 PrisonPlanet TV service and selling documentary video productions.When he had full access to YouTube and Facebook to promote his line of supplements, Jones could afford to give away his content. Without the free advertising those sites provided, it’s possible he’ll have to lean harder on selling that content, in addition to selling products like Super Male Vitality and Brain Force Plus.

All of this comes as Jones already faces other challenges. He’s the subject of multiple defamation suits: two from parents of children who were murdered in the 2012 Sandy Hook massacre and one from a person who was misidentified on Infowars.com as the Parkland shooter earlier this year. If he survives the legal challenges, Jones will still have to adjust his business model to account for the loss of the two largest media platforms in the world; if he survives that, he’s still at risk of potentially massive damages judgments from the court cases. At the very least, Jones has lost this week’s battle—the question will be whether he’s also lost Infowars. 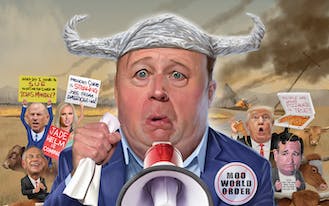 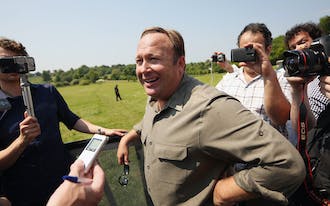