The first time Aaron Latham saw the uncut version of Urban Cowboy, the film based on an Esquire piece he wrote in 1978, he was worried.

“I thought we had made a bad movie,” says Latham, who also co-wrote the screenplay. It was five hours long and began with a montage of John Travolta shaving, complete with closeups from every angle imaginable. They had gone overboard, even with an actor who Latham says was, at the time, “Elvis Presley famous.” “We set out to record [him shaving] as if it were a historic event,” Latham remembers. “Like the Germans would have documented the shaving of Hitler’s mustache.” It wasn’t until the scene was cut—ordered by Travolta himself—that the journalist began to see the movie’s potential.

Stories like these, and there are plenty, are told through the near-daily journals Latham kept while on set. Latham donated his multi-volume diary from the making of the 1980 film, notes for Urban Cowboy: The Musical, and other papers from his time working on the article and the movie to the Harry Ransom Center at the University of Texas at Austin.

Urban Cowboy is the story of how a mechanical bull can make or break a relationship. It follows the on-again-off-again romance between Bud—who had just moved to Houston in search of work—and Sissy, who meet and fall in love at a honky tonk called Gilley’s. The movie is based on Latham’s article about a couple, Dew and Betty, that divorced over Betty’s quest to conquer the bar’s mechanical bull. The film gets a Hollywood ending much happier than the actual couple, and Latham’s papers provide a look into the process of turning a true story into something more glamorous.

“It offers researchers an opportunity to better understand an iconic cultural work like Urban Cowboy,” said Megan Barnard, the Ransom Center’s associate director for acquisitions and administration. “People can gain new insights about Urban Cowboy and a deeper understanding of how these creative works came into being.”

The papers are currently waiting to be processed by curators at the Ransom Center, and once they are catalogued and available for viewing, researchers will be able to study Latham’s work. They will also be able to explore some of the more controversial scenes in the movie through Latham’s eyes.

“Some scenes turned out to be unexpectedly violent,” Latham says, like when Bud hits Sissy at a greasy spoon after a night at Gilley’s. Winger was “the sort of actress who wanted to live the role,” according to Latham. “She wanted to really fall in love with her leading man.” And when the characters were supposed to fight, she wanted that to look and feel as real as possible.

So to make Travolta angry, she pestered him mercilessly before the scene, and when the time came, Travolta didn’t hold back. “When the director called for action, John Travolta stepped up and knocked Debra Winger’s front tooth out,” Latham says.

By rereading his old journals before handing them over to the Ransom Center, Latham was able to reflect on his time working on the article, screenplay, and the filming of the movie. “I realized how much I came to love these people,” he says. 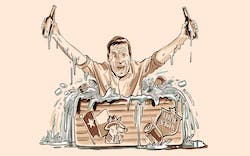 The Texanist: Where Have All the Longneck Beer Bottles Gone?