To be a teenager in 2015 is to have your every move scrutinized as potential fodder for the Internet. Sometimes it’s because someone else happened to catch you falling down while chasing your dog around the park, and sometimes it’s because you uploaded your choreographed cheerleading routine intended to honor 9/11 victims on Facebook—but either way, once you go viral, there’s no going back.

The young ladies on the Lumberton High School cheerleading squad learned that the hard way this weekend. The squad shared the video of their 9/11 tribute routine on Facebook and promptly received 24,000,000 views (and counting). As a teenager, having millions of people be interested in your performance is surely thrilling (indeed, one of the cheerleaders recounted exactly how thrilling it is in the comments on the YouTube version of the video), but the reaction to this has been less “sincere appreciation for the art of cheerleading” and more “outrage at the combination of cheerleading + 9/11.”

Are. You. Kidding. Me. Let's Watch These Texas Cheerleaders Commemorate 9/11 With a Tasteful Cheer Routine http://t.co/eQRGCnuCxK

If you're yearning to cringe. Couldn't watch the whole video. Texas HS cheerleaders set routine to sounds of 9/11 http://t.co/XsTConPEbA

For terrorists, 9/11 is the gift that keeps on giving because of stuff like Texas #Cheerleaders Twin Tower routine. https://t.co/KyCpYf2DBm

Texas Cheerleaders' 9/11 tribute divides opinion http://t.co/ndrp2y99es Besides being terribly tasteless, they are not very good either!

Today in WHAT THE HELL IS WRONG WITH PEOPLE, FOR REAL: Texas cheer squad routine set to "the sounds of 9/11" – http://t.co/B0dUQBOZJk

It wasn’t all bad news and haters for the cheerleaders, though:

Wow! This was beautiful! What a GREAT way to honor those on 9/11 http://t.co/Zr4UZHfDqY

Okay, cheerleading maybe isn’t the most obvious medium for memorializing thousands of deaths and the subsequent shake-up of the American identity that followed. But it is an artistic medium, even if it is more often associated with touchdowns. Those who consider the routine tasteless might ask themselves if they’d be as galled by a video that showed, say, the high school marching band creating a similar routine.

Perhaps people are rankled by the performance of grief because it is coming from cheerleaders in their teens. September 11, 2001, was fourteen years ago, which means that even the oldest of the girls in that video were probably only toddlers when the towers fell. It’s not that people are incapable of being moved by tragedies that occurred before they were cognizant of them, but the disconnect could make it seem impersonal. 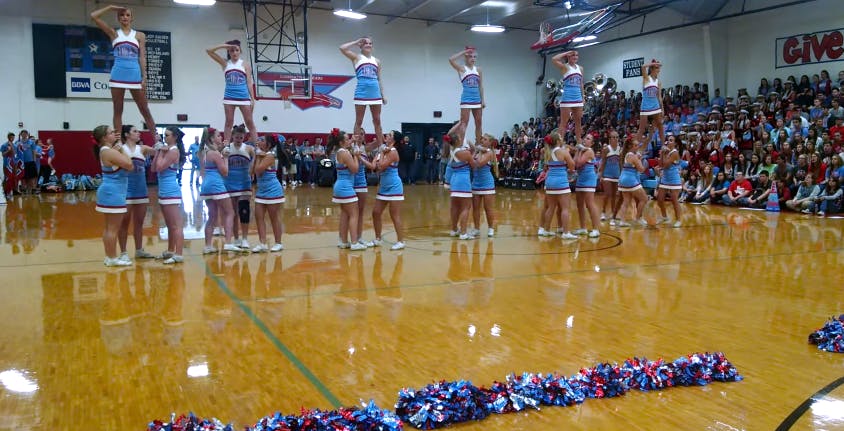 And then, of course, there’s the response of the cheerleaders themselves—24,000,000 views brings out a lot of haters, and though cheer sponsor Lauren Sheffield told E! News the squad does it “to honor and remember the first responders, those who gave their lives, and those who still mourn the hole left by lost loved ones,” the response of cheerleader Crystalynn Petoskey offers another glimpse. Petoskey wrote this in the comments on YouTube:

Everybody that is saying that this is, well, basically a disaster, I don’t care what you all say. Others like it, others don’t. I respect your opinions. But while my video is getting over 1K on here, it’s getting over 8,000,000 views on Facebook and getting reposted all from Alaska to Florida, all the way up to New York, and this was taken in Texas! 100.5 MYfm and KBMT – 12 have also recognized and reposted my vid. My face is being shown all over American, and perhaps will also be shown all over to Japan soon. So anybody that has something bad to say, F*ck You All [sic], I’m going viral.

Opining about the true meaning of September 11 is a boring game—whether we call out the brands who make a big show of their own grief on the anniversary or declare them patriotic—but responding to the critics of your 9/11 tribute video with “F*ck you all, I’m going viral” is the exact sort of missing perspective that is raising eyebrows.

Hankering for a Sweet Story? Look No Farther Than a High School in Beaumont

By Texas Country Reporter
Being Texan