Texas Monthly’s Alamo Drafthouse #DontTalk PSA Bracket Challenge continues apace this week, and from our initial field of 32, we’ve culled the list down to the final eight. (So long, Turkish Spider-Man! Farewell, Fake Terry Gilliam!) With the contest nearing its final days—we’ll go down to the final four on Thursday, and then voting for the champion will take place over the weekend, with the winner to be crowned on Monday—we took a few minutes to catch up with Drafthouse founder and CEO Tim League to get the behind-the-scenes scoop on the final eight PSAs left in our bracket. Read on to learn how Ann Richards liked to prank Drafthouse customers, getting the lawyers to approve the Magnited States of America, and how Danny DeVito turned an ambush into a classic.

Texas Monthly: How did it take so long to get Danny Trejo to do one of these?

Tim League: That’s a good question! I think it came up when we were working with Robert [Rodriguez] on some promotion around Machete. And once the idea got floated about what we could do around Machete, we were all realizing “What the hell have we been thinking? Danny Trejo comes to Austin all the time!” We know Robert, and we all just kind of slapped our heads a little bit. Shame on all of us involved!

TM: Do you think Lewis Black really gets as angry about people who talk during a movie as he seems in his PSA?

TL: It’s funny to think about Lewis Black in general. I don’t know if it’s an affectation, or just his genuine personality, but watching him lose control of his hands while he’s delivering that particular tirade makes me think that it’s more than just good acting. It’s something more close to his soul.

TM: How did the Ann Richards spot come about?

TL: It’s my favorite one. I’m voting for Ann Richards. That’s my favorite of all time. That one is awesome—Ann was a regular customer, and she had the cell phone number of the manager at the time. She would call to say, “I’m coming over, just hold me a seat.” And we would. And then one day, she came in and said, ‘Hey, is Mike here?’ and the waiter found Mike, the manager, and he was brought before Ann Richards, and she said, “Mike, I’m really angry at you. I’m offended that you have never asked me to do a ‘Don’t Talk’ PSA.” So within a week we had assembled a crew, and she came in and was a super good sport about it. But since she was a regular at the theater, what she really loved to do was to have her PSA play on screen while she would hang out in the hallway—and then, once the PSA played, she would go sit down right next to somebody, as if she were on staff or in the closet or something, just waiting to enforce the ‘Don’t Talk’ policy.

She was awesome. Not only is it my favorite PSA, she’s just one of my favorite human beings, and hands down the best governor we’ve ever had.

TM: Was it hard to convince Kyle Chandler to don Coach Taylor’s polo one more time?

TL: He was a great sport. He’s been to the theater a few times, too. When they were shooting here in Austin, they shot one of the episodes at the theater, so he’s well aware of what we do. We have some pretty heavy-duty fans of the show at the office, and I think they’ve gotten to know him over the years, so it wasn’t too much of an ask. Like Ann Richards, he was happy to carry the torch for proper movie etiquette.

TM: The “voicemail” spot ended up being a huge national story and inspiring a national conversation about texting in a movie theater. Were you ready for that?

TL: We had never experienced anything like that before. We knew it was funny, and we were really happy with it when it came into existence in the first place. I remember that day really distinctly—the very first outlet to write about it was Roger Ebert. Roger Ebert posted it and wrote a little article, and then as soon as he did, it got picked up by a ton of other outlets, and then just sort of snowballed. It took down our website—we didn’t know what to do. It was the first time we learned how to host a static page and relieve the website so that we could actually sell tickets again. That whole week was crazy. When it ramped up to five million views in that first week, we were surprised and we were unprepared.

The voicemail came in as an mp3, because all of our voicemail messages do that, and the manager of the Village, where the incident happened, shot it to us and said, ‘This would make a funny PSA…’ And Henri, in our office, conceived of the execution of this piece. So we called our lawyer to ask, ‘Can we do this?’ and as long as we never sold it and just used it for internal promotion, the voicemail is clearly defined in the law as our property. We were nervous about putting it out there, but we got the legal blessing that week.

TM: Peggy’s a favorite, too, but she’s in a hard race now against the voicemail. Whose idea was it to get one of your older customers to do one?

TL: She’s got a tough bracket. Peggy was the grandmother of a real regular customer of ours, and she hadn’t been to the movies in something like thirty years. She just stopped going to the movies for whatever reason. And she came back to the movies because of her grandson, and she really loved the whole experience, and started coming really regularly—like once every week or so. She was just such a character, and really beloved by the staff. I don’t know whose idea it was, but it was somebody on staff who got to know Peggy as one of our favorite customers, and since she’s such a character, stuff like that’s just rolling out of her mouth all the time. It’s sort of like Danny Trejo staring you straight in the face.

TM: Was R. Lee Ermey one of the early ones?

TL: Yeah, it was real impromptu! He was in town, I think, for the Texas Chainsaw Massacre reboot. We did an outdoor screening and we brought R. Lee Ermey into town. Obviously it’s sort of poorly shot, and at night, but he just rolled that off without even thinking about it. Just “Bam!” one take, and back to his cigar.

TL: I’ll have to verify this, but we did a contest, and I think it might have been during SXSW. It was definitely when he was rolling out his Limoncello liqueur, and he was at a signing event for the product launch. And we did a challenge, just putting it out to the field: Anyone with a camera, make a “Don’t Talk” PSA. I think it might have been during SXSW, because we encouraged people to find famous people and do this. So this was somebody with a Handycam, a customer of the theater, just asked Danny DeVito in one take, unrehearsed. It interrupted his signing a bit, but because he’s Danny DeVito, he can make that happen with just a quick one take, no forethought, no planning.

Vote in the bracket challenge here. 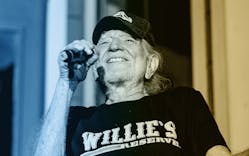 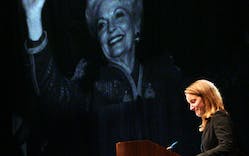