At Borchardt Elementary School in Frisco, fourth and fifth grade students take a monthly class with the guidance counselor. In that class, they learn about all sorts of things kids who are old enough to think about their future should know: college/career exploration, salaries, living experiences, etc.

Well, the boys do, anyway. The girls get “Girl Talk,” where they learn about confidence—not just how to get it, but also “can we have too much?”—and discuss friendship. 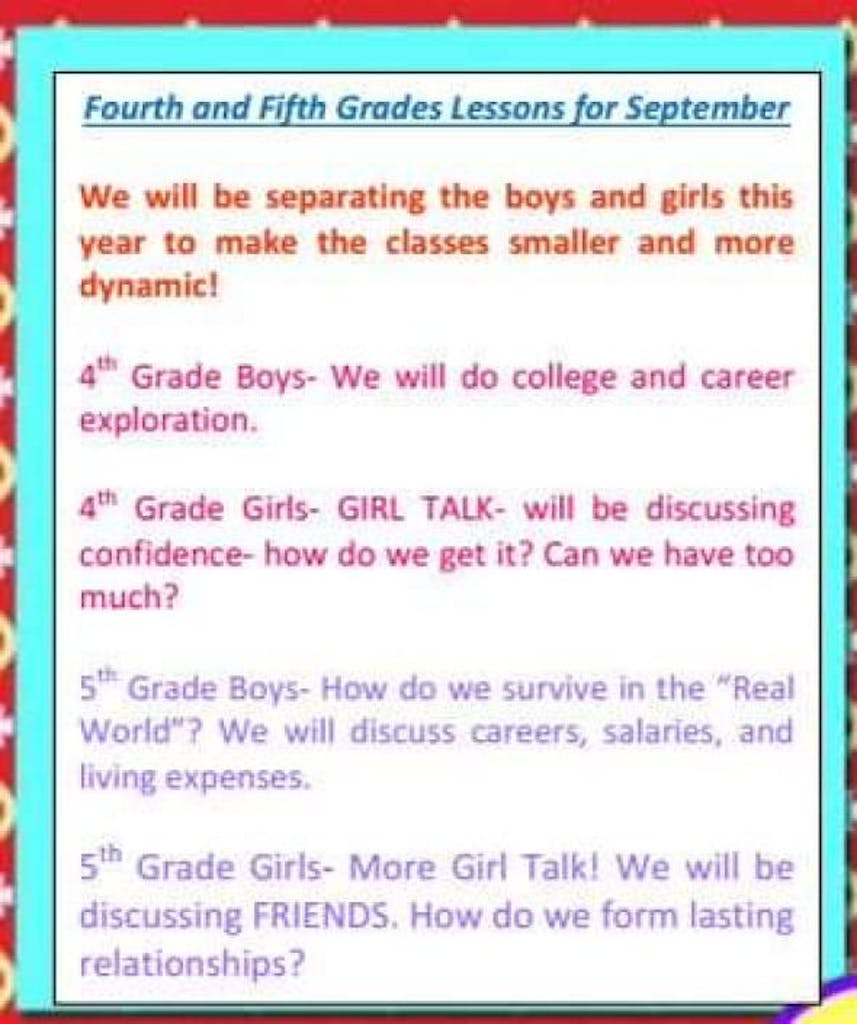 That’s a screenshot of the Borchardt Elementary School counselor’s newsletter obtained by ABC affiliate WFAA. As you might imagine, it was deeply troubling to some parents who didn’t understand A) why the lessons were being divided by gender, or B) why the lessons seemed very different in their focus. As the station reports:

Nanny Ashley Kennedy felt a pit in her stomach.

“Reading that definitely does not sit easy with me,” said Kennedy.

“Is the female supposed to have all these friends and stay at home while the male goes to college?” asked Kennedy. “It definitely is getting the idea of gender roles in children’s head at a young age.”

The school went on to explain that the newsletter was a mistake—that September’s plan had been to offer both students the college and career lesson—and the newsletter had been created in error. “It was the intention all along that the students would get the same lessons,” Frisco ISD spokeswoman Meghan Youker told WFAA. And Principal Jodi Davis added that all lessons throughout the year would cover the same topics.

It’ll be interesting to see how fourth and fifth grade boys respond to the “Girl Talk” lessons, if that’s the case, but the explanation still doesn’t answer other troubling questions. Why separate the kids by gender at all? And why was the school ever, at any point, considered starting the boys with thinking about college while the girls were about to learn how much confidence would be too much in the first place?

Those answers probably aren’t coming anytime soon, but we can rest assured, at least, that the parents in Frisco will be vigilant as they seek answers.