On August 11, 2012, Austin Tice celebrated his thirty-first birthday, listening to Taylor Swift at a pool party while reflecting on his previous summer. It was a rare moment of relative normalcy for the freelance journalist who was in Syria, reporting on the country’s civil war. The next day, Austin planned to head to Beirut for a respite out of the war zone. But instead, he was abducted on the outskirts of Damascus. He has now spent the last four years, two months, and 21 days somewhere in Syria, inaccessible to all those who love him.

In the 1,542 days since her son was captured, Debra Tice’s unwavering focus has been on one goal: bringing Austin safely home to Houston. As part of this mission, on Wednesday Debra stood outside the Newseum in Washington, D.C., as a 24-foot banner was unveiled on the building’s glass facade along Pennsylvania Avenue. The banner features a black-and-white photograph of Austin and the words “held captive for being a journalist since August 2012.” The image and its message will greet politicians, hill staffers, and tourists traveling up and down busy Pennsylvania Avenue, until Austin returns safely home.

Banners like this one are customary in places like France, where the public bristles with outrage any time a journalist is kidnapped. But this campaign, launched on the third annual International Day to End Impunity for Crimes Against Journalists, marks the first time a missing American journalist has been featured on such a banner at a large institution in this country, according to Reporters Without Borders.

Debra and her husband, Marc Tice, hope this visible reminder of Austin’s captivity will push the Obama administration, in its waning days, to make moves that will deliver their son back to them. “We want to draw people’s attention to the fact he’s still captive,” Marc told me on the phone Tuesday. “The banner will remind visitors to the capital and residents of the capital, including the president, that is this is something that still needs to be done.” If Austin is still captive on January 20, the banner will be visible on the Inauguration Day parade route.

His parents also hope the banner, while highlighting Austin’s specific plight, will also remind people of the broad idea that journalists are people who put their lives on the line to bring the rest of us the news. “Behind all the rhetoric about the media, there are real people doing real work that is important to all of us who want to know things about the world,” Marc said. “On the façade of the Newseum, the First Amendment is carved; and it’s not some abstract thing – there are people who have committed so much to give us the benefit of a free press.”

State Department spokesman John Kirby echoed that sentiment from his podium Wednesday afternoon: “The Newseum put up a banner today to serve as a public reminder of his situation and, frankly, of the very real risks that journalists face all around the world.” He went on to urge Austin’s captors to “release him now.”

This summer, the Tices were granted an audience with President Obama. It was a meeting they had been seeking for years, and, over a course of almost a half hour in the Oval Office, they were impressed by Obama’s detailed knowledge of Austin’s case. “He seemed to fully grasp how we felt and seemed to be fully engaged and committed,” Marc said. While initially critical of the administration’s response to their son’s kidnapping, they are pleased with the reforms that have come in the wake of the president’s Hostage Policy Review. They now have regular meetings regarding Austin’s case at the Hostage Recovery Fusion Cell, an interagency group housed at FBI headquarters. “There is sharing now that goes both ways,” Marc said.

When reporting my October 2015 feature story for Texas Monthly about Austin and his time in Syria, the Tices were generous with their time, showing me baby photos for their son and regaling me with anecdotes to illustrate how Austin, equal parts stubborn and spirited, made the transition from chubby baby to Eagle Scout to law student to freelance journalist. He was moved by his innate sense of justice to go to Syria to tell the stories of what was happening there. In May 2012, he crossed the Syrian border near Antakya, then spent the rest of the summer working his way south, witnessing battles and freelancing for McClatchy and the Washington Post along the way. But then, on August 12, as he was heading to Beirut from the Damascus suburb of Daraya, he vanished. Six weeks later, a disturbing video of him being hustled up a hill sporting a newly sprouted beard would appear on YouTube. It’s the last known communication from Austin. He would go on to win, in absentia, a Polk Award for war reporting.

While his parents lack knowledge about the specifics of where Austin is and who is holding him, they do know that he is alive and “in reasonably good health,” Marc said. “We have every reason to believe that he’s going to come home safely.” In pursuit of that goal, in the last four years the Tices have made more than twenty trips to D.C., and almost a half dozen visits to the Middle East, most recently traveling to Beirut last spring. Through their travels, they have cultivated a network of contacts around the globe that they hope will soon provide them an answer to their most pressing questions: where is their son and what needs to happen for him to be freed.

The Tices are now publicly renewing their call for Austin’s captors to contact them. “We ask his captors, whoever is holding him, to contact us and let us know what is necessary to happen for him to be released,” Marc told me on Tuesday. “We would dearly love to start a dialogue so that we can get him home. We continue to not see any purpose or reason or benefit that anyone could possibly be getting from continuing to hold him.” 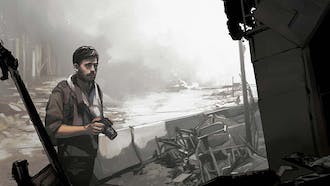 The Road to Damascus