In the middle of December, a “bee rustler” made off with 300 of Randy Verhoek’s honeybee colonies. Verhoek, a Danbury resident who keeps his bees on a ranch in Manvel, says the total value of the stolen colonies is about $90,000. In a Facebook post he made on a public group called “Commercial Beekeepers” on January 6, Verhoek offered a “BIG reward to anyone who can provide information leading to the prosecution of this lowest life form.” The post has nearly a hundred comments from other beekeepers in Texas and California, commiserating his loss and sharing their own stories of thefts.

Bee rustling—like with cattle, except with bees—is a growing epidemic. The prosperous California beekeeping community has been rocked by a rise in thefts, sometimes hundreds of colonies at a time. And based on his Facebook post and his comments to the Houston Chronicle, there seems to be some tension in the community—Verhoek believes that the recent theft was an inside job. “Do you think its [sic] another beekeeper with it beeing [sic] a big set up,” one commenter asked.

Beekeeping has become a booming industry over the past decade. As Brett Murphy of the Guardian reported, nearly two decades ago the beekeeping industry profited after a commercial boom in almonds. As Murphy reported in 2016:

Thanks to global demand, particularly from Asia, the nut has taken over Central Valley, nearly doubling its hectarage to 370,000 since 2005. California produces more than 80% of the world’s almond supply today. The boom brought with it an unprecedented demand for pollination. With bees, an almond tree produces 70% more nuts than without. “Bees,” one almond grower told me, “are as important as water.”

Before the bee craze, the beekeeping industry had primarily been dominated by honey manufacturers who worked out deals with farmers to let their bees pollinate their crops, which in turn helped bees produce honey. Eventually a mutual agreement turned into profitable business to supplement the income of honey manufacturers as more crops, such as pistachios and mandarin oranges (in addition to almonds), were in greater demand. According to the Guardian, in 2016 almond farmers were renting bees at $180 per hive.

But as demand for bees rose, so too did a strange colony sickness. Murphy said that in the winter of 2006, beekeepers reported losing an unprecedented 30 to 90 percent of their hives to disease. Most attribute the loss, which has since leveled off a bit, to colony collapse disorder. Although scientists are still struggling to understand it, they believe the disorder is caused by a variety of factors: pesticides, varroa destructor mites that leech blood from bees, and a loss of land to farming. Colonies are typically lost during the winter, but a rise in colonies being wiped out during the summer is worrying scientists.

“It’s very troubling and what really concerns me that we are losing colonies in summer too, when bees should be doing so well,” said Dennis vanEngelsdorp, a University of Maryland bee scientist told the Guardian. “This suggests there is something more going on—bees may be the canary in the coalmine of bigger environmental problems.”

According to an analysis conducted by the Bee Informed Partnership, which has been tracking U.S. bee colony losses since 2006, 44.1 percent of colonies were lost from April 2015 to March 2016. With the loss of bee colonies came increased demand for any surviving bees—and the rise of bee rustlers.

The sentiment among beekeepers is that bee rustlers tend to be newcomers to the industry who entered into it hoping to profit, but are inexperienced with handling with the loss of bee colonies that comes in the winter. In order to meet contracts they signed earlier in the year, they turn to stealing other beekeepers’ colonies when theirs die. In attempts to prevent thefts and recover stolen hives, beekeepers have taken to marking their bee boxes, where the hives are kept, with brands and sometimes even installing GPS devices. Verhoek’s boxes, marked with “HHI” on the sides, still haven’t been found. 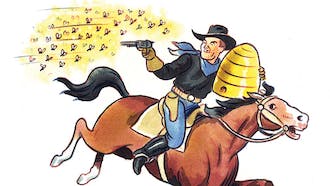 Of Bees and Men