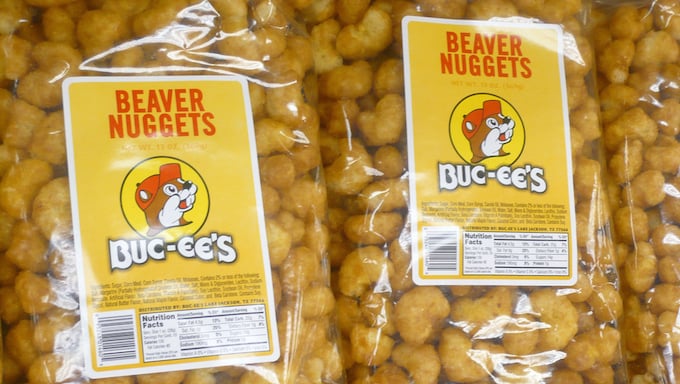 Buc-ee’s: The chubby-cheeked avatar of clean public restrooms! The bucktoothed endorser of Dan Patrick! The friendly beaver that promises well-lit, comfortable roadside satisfaction! These are just a few of the things that the image of Buc-ee himself, the mascot of the 27-store chain founded in 1982 by Texas A&M grad Arch Aplin, conjures in the minds of those who gaze upon his visage.

It’s also something that the chain is keen to protect, which is why they’ve filed a trademark infringement lawsuit against the new beaver in town, a tubing supply store on the Frio River called the Frio Beaver. Both stores use beaver mascots—though Buc-ee is chubbier cheeked and more wholesome looking, in his red ballcap, than the devil-may-care Frio Beaver, who wears shades and carries a tube—and, perhaps more tellingly, both of them place that mascot within a bright yellow circle, which probably won’t help the Frio company’s case.

As the Houston Chronicle reports:

They allege the black line and yellow background used on Frio Beaver signage and merchandise  are a direct copy of their own yellow backed, black outlined furry friend.

“Defendent’s intended their image to be a copy of, or at the very least suggestive of, the Beaver Logo,” lawyers for Buc-ee’s, H. Tracy Richardson II and Elizabeth Lieb, wrote in the lawsuit.

Lawyers for B and B Grocery Inc. who own Frio Beaver say the suit has not yet been served on them.  Bobby Rushing of Rushing Law firm based in Leakey said his client had no comment at this time.

The defendent’s intentions are, at this point, still unrevealed. But Austin Logo Designs, which apparently designed the image, shared it on design portfolio site LogoMoose last year with the caption, “I created a beaver illustration for the logo portion of Frio River that was cool enough for both parents and college students to wear in the Texas Hill Country.” We’re not entirely sure what “the logo portion of Frio River” refers to exactly, but there is no mention of Buc-ee’s in the description.