The Middlelands Festival is working hard to earn the designation as one of the weirdest music festivals in Texas, and not just because it’s being held on grounds that usually host a renaissance festival. That, after all, had already been done.

Middlelands is a collaboration between the two powerhouse promoters—C3, the Austin-based operation that puts on Austin City Limits, Lollapalooza, and New Orleans’ Voodoo Music Festival each year, and Insomniac, whose Electric Daisy Carnival leads its slate of EDM-focused events. It will take place on the grounds of the Texas Renaissance Festival in Todd Mission, outside of Houston. The event was announced on November 9, which is just days after C3’s main competition in Texas, Margin Walker Presents, completed its inaugural Sound On Sound Fest at the Sherwood Forest Faire in McDade. Sound On Sound was both ambitious and largely successful, but whether the similarity in concept is a wild coincidence or an example of C3 and Insomniac finding inspiration in their competitor’s idea, Middlelands looks to be carving out its own identity based on the weird way it’s marketing itself in the lead-up to the event in May. Here’s the unusual stuff about Middlelands:

The lineup is announced alphabetically 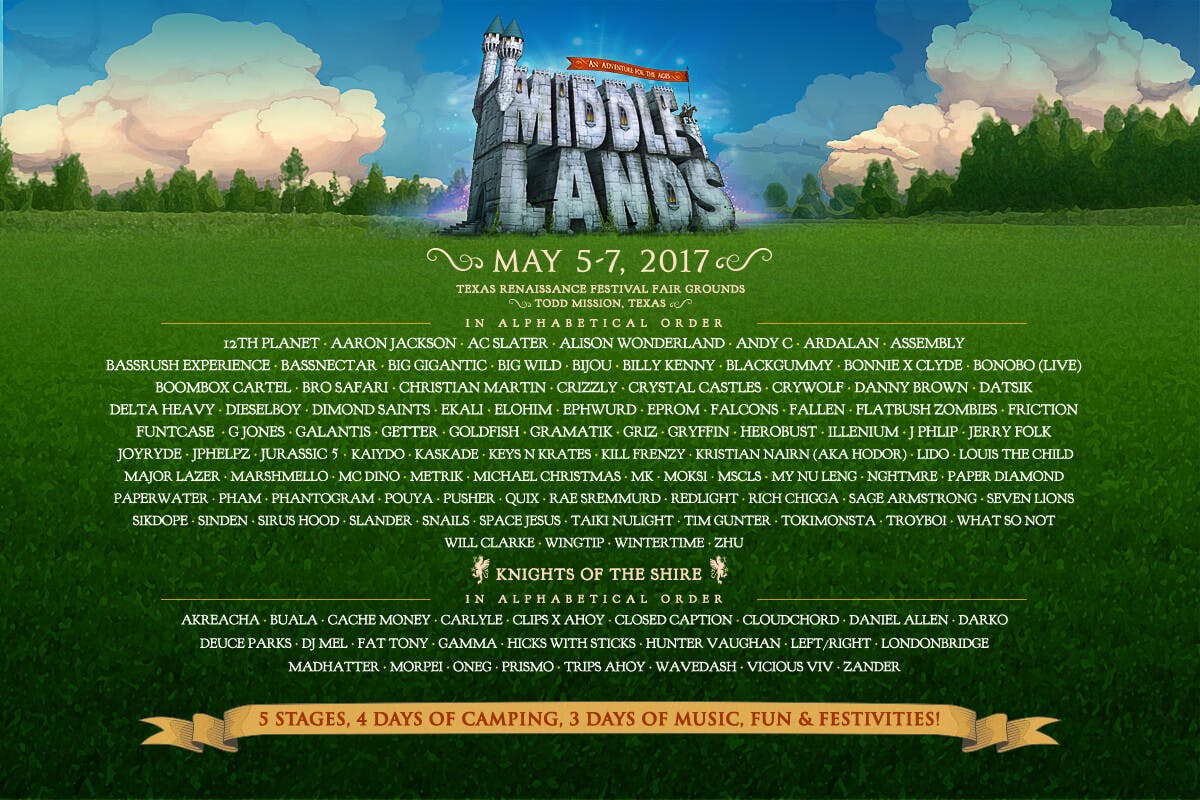 The format for music festival posters is such a standard thing that there are a bunch of music festival lineup generators out there. The way they operate is to announce the headliners on, er, the headline, with the next most famous acts on the line beneath that, the middle tier below them, and the local bands/vendors/celebrity chefs/whatever way down at the bottom. On the post for Middlelands, though, the entire lineup is just done in alphabetical order. It’s a cool, egalitarian way to ensure that you have to search through the whole lineup to find out which artists you care about are playing. Superstars like Bassnectar are on line two, while Eugene, Oregon DJ Aaron Jackson, who has 1,200 Twitter followers, is the very second act named on the poster. Good for Jackson, he seems like a hardworking dude, but this isn’t usually how music festivals hype their lineups to fans who are deciding whether or not to buy a ticket. (It should be noted that other EDM events like Electric Daisy Carnival have rolled out lineups in a similar fashion.)

The “headliners” section of their website is even less helpful

Navigate the website over to the section that reads “our headliners” and you see this:

“You are the headliner” is the sort of thing a music festival tends to put out there when they haven’t got, like, actual headliners. Middlelands does, though, if you scour the list long enough to find them.

That statement is nice, though—hey, congrats, you’re the one who’s special, Crystal Castles are coming to the festival to see you!—and it does get across what they’re trying to do at Middlelands that’s interesting, and what differentiates it from every other music festival that doesn’t take place at a ren faire, which is:

They’re really hyping the “experience” aspect of the festival

Many music festivals are pretty much the same. (Billboard even has a tracker to help fans follow the overlap in artists.) You show up, see artists you like, get sweaty next to a bunch of strangers, pay too much for beer, etc. Maybe there’s camping at some, or a comedy tent, but if you’ve been to one, you’ve been to most of ’em. Middlelands, though, is selling something different: It’s the “World of Middlelands,” with stages called “Castle Northwoods,” “The Stronghold,” and “Wench’s Bay.” There are rides, like at an amusement park, that are free (expect to pay in the time you spend waiting in interminable lines, though), there are renaissance faire-themed attractions like “cyber-wenches,” “barbarian beauties,” and “neon knights” around to entertain you.

All of that sounds cool, and the idea that Middlelands is a place to run around with people in brightly-colored cosplay while Flatbush Zombies play in the distance is a different way to sell this kind of event.

They sell tickets on layaway

Music festival tickets are overpriced. That’s just a fact of the business as each festival becomes a little less special, and it’s why every promoter in the business is more and more terrified that the bubble is gonna burst with each passing year. Middlelands helpfully mitigates its $205 general admission price tag by splitting it into two (with a $60 markup, for those who choose this option). It’s an unusual move (although Insomniac has done it with Electric Daisy Carnival in the past), but it does let them estimate the attendance they can expect earlier on, rather than having to hope that a bunch of last-minute buyers are gonna come in in March and April. On the one hand, it’s a nice way to accommodate different budgets; on the other, it’s sort of a tacit admission that they don’t really know what their audience is going to be like.

The high-end experience gets really high-end

A campsite at Middlelands runs $165 for the bring-your-own-tent variety of camping. The upgrades climb in price quickly, though, with $350 getting you space for an RV, $380 for a spot near the trees so you can enjoy some shade—but if you want to stay in a pre-made campsite, things get really crazy. The “Rook’s Quarters” features a Middlelands-branded tent that’s already set up for you, with sleeping bags and pillows, at $1,400 for the weekend for two people. Up it to the “Knight’s Quarters” and you’re living large in a lil’ cabin with a fan, real bed, and mini-fridge—at $3,150 per night (which they helpfully explain is about $393 per person, per night, for two people over three nights). If you’re going to live that large, though, you might as well up it to the “Paladin’s Quarters” at $3,900, which gets you 300 square feet (enough to sleep four), “mood lighting,” a lock box, and a Revolar personal safety device so you don’t get mugged by someone who sees you walking into the big tent and assumes you’re loaded. (Meanwhile, $5,450 gets you a “regal coach,” which is just a Winnebago that looks pretty underwhelming compared to the Paladin’s Quarters.)

All of this is not unprecedented—Bonnaroo, for example, has its own “glamping” options—but the range of options in between “BYOT” camping to “Royal Manors” with morning yoga classes, a pop-up jacuzzi, and a personal, dedicated concierge is breathtaking.

In all, Middlelands looks like a fun way to spend a weekend, which is ultimately the point of these things. The fact that it swerves so far afield from what C3 has done with ACL and Lollapalooza, though, suggests that it’s gonna be a pretty different experience from those festivals. If you’re bored with them, yahtzee—but for Texas music fest, even though there was literally one that took place at a ren faire three months ago, this is still somehow uncharted territory.