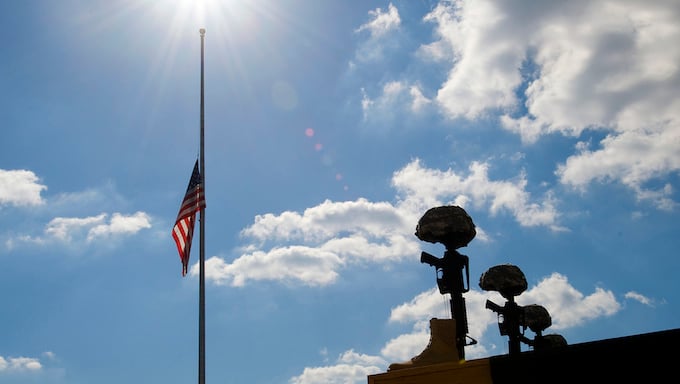 Late in the day on Tuesday, a military jury found Master Sgt. Brad Grimes, who is stationed at Ft. Hood, guilty of conspiring to patronize a prostitute and solicit adultery. But the revelations that came out of the trial are much more troubling.

According to the Austin American-Statesman, the nature of the prostitution that Grimes sought involved female soldiers who had allegedly been “recruited” as prostitutes by a non-commissioned officer, Sgt. First Class Gregory McQueen. McQueen, who has not been charged, has since been relieved of his duties as a sexual assault prevention officer at the base. But there are questions worth considering about the case:

Grimes was accused of taking part in a scheme in which young, cash-strapped female privates were allegedly recruited into a prostitution ring by Sgt. First Class Gregory McQueen, who was serving as the sexual assault prevention officer for a battalion within Fort Hood’s III Corps headquarters. McQueen has been suspended from those duties but remains on active duty. He has not been charged. A second private has accused McQueen of abusive sexual contact her during an “interview” to be part of the ring, according to investigative documents obtained by the Statesman.

The use of the word “recruited,” in this context, seems euphemistic—and euphemisms like that, while comfortable, obscure what should be a wider conversation about consent and abuse. Given the nature of military culture, and the inherent imbalance of power between an enlisted female soldier and a male superior, what does “recruitment” into a prostitution ring look like?

Between the hierarchical structure of the military and the allegations of “abusive sexual contact” on the part of McQueen, it’s hard to understand what the difference might be between soldiers who were allegedly “recruited into a prostitution ring” and soldiers who were raped by a superior.

To be certain, McQueen has yet to be charged with a crime, though according to this report on the subject from The New Republic, the reasons for that appear to be tied to the fact that McQueen’s colleagues refuse to testify:

Grimes denies the charges against him, claiming that there was no money involved, and that although he considered a rendezvous with a private, he never went through with it. But what’s not up for debate is that Grimes knew about McQueen’s scheme and did nothing to stop it; his defense attorney, Daniel Conway, has said Grimes also refused a plea deal that would have required him to testify against his colleague.

Conway claims it’s precisely Grimes’s refusal to squeal that has landed his client in court. “At the end of the day, Master Sgt. Grimes chose to do the right thing and not have sex with that young lady,” Conway told the Statesman. He disparaged the prosecutor for trying “to charge [Grimes] in hopes of a conviction and using [Grimes] to testify against McQueen.” If Conway’s theory is correct, this is a rare case of the military cracking down on an officer for keeping mum.

When we use language like “recruited,” especially in the context of the military—for which “recruitment” usually conjures images of friendly officers setting up tables in high school cafeterias and taking interested students to Taco Bell to talk about their future—we obscure the allegations that McQueen really faces, which paint him as someone who is downright predatory:

The private later told a staff sergeant that McQueen “preys on young females who are in bad financial situations and that he keeps their pictures on his cell phone,” according to a sworn statement.

The nature of McQueen’s activity at Fort Hood is likely to come to light at some point. The Killeen Daily Herald reports that “testimony and documents submitted as evidence hint that McQueen, and possibly others, are still under investigation,” and Conway—Grimes’s attorney—said in his closing statement that “McQueen will have his day in court.” If the allegations against him are true, words like “recruitment” appear insufficient to describe how he brought female soldiers into the operation.