Terminally ill Star Wars fan Daniel Fleetwood had one last wish in his struggle with spindle cell sarcoma: The Houston man wanted to see The Force Awakens before he died. As the Internet caught wind of his dying wish, Fleetwood became something of a cause online, inspiring a #ForceForDaniel hashtag and leading stars of the latest Star Wars installment such as John Boyega, Mark Hamill, and Peter Mayhew to lend their support online. Both Disney and director J.J. Abrams made that happen for the 32-year-old, allowing the fan to watch an early edit of the film in November.

Fleetwood’s story, while terribly sad, nonetheless warmed our hearts. Given the intense secrecy around the most anticipated film of all time, Disney bringing a copy to Houston for a single fan to watch so he wouldn’t have to die without having seen it, was an unexpectedly sweet gesture. (Fleetwood died November 10.)

Peter Mayhew—the gentle giant who’s played Chewbacca in five of the seven Star Wars films—went way beyond the call of duty for Fleetwood’s family, though. So moved was the 71-year-old by Fleetwood’s story that he invited his family—wife Ashley and her father—to his farmhouse near Fort Worth, where the 7’3″ Englishman lives with his wife.

“When Daniel was sick, they actually Skyped him. It was so sweet and amazing,” Ashley told Entertainment Tonight. “They invited us to visit, but he was unable to travel. After he passed, they extended the invitation again. So I asked if, for my dad’s 60th birthday, if we could maybe visit. They said ‘yes’ and were so welcoming.”

Ashley and the Mayhews shared photos of the visit, which was coordinated by fan club The Star Garrison of the 501st Legion.

“I want to thank the amazing Peter [and Angie] Mayhew for inviting my family to their wonderful home,” Ashley wrote on Facebook. “They were so welcoming and kind. I also want thank the 501st for being there as well. Thank you!! You made my dad’s birthday.”

Ashley shared photos from the trip to Boyd on Facebook, where she, Mayhew, and his wife Angie posed near the family’s Christmas tree and she and her father check out the actor’s impressive collection of Chewbacca memorabilia. 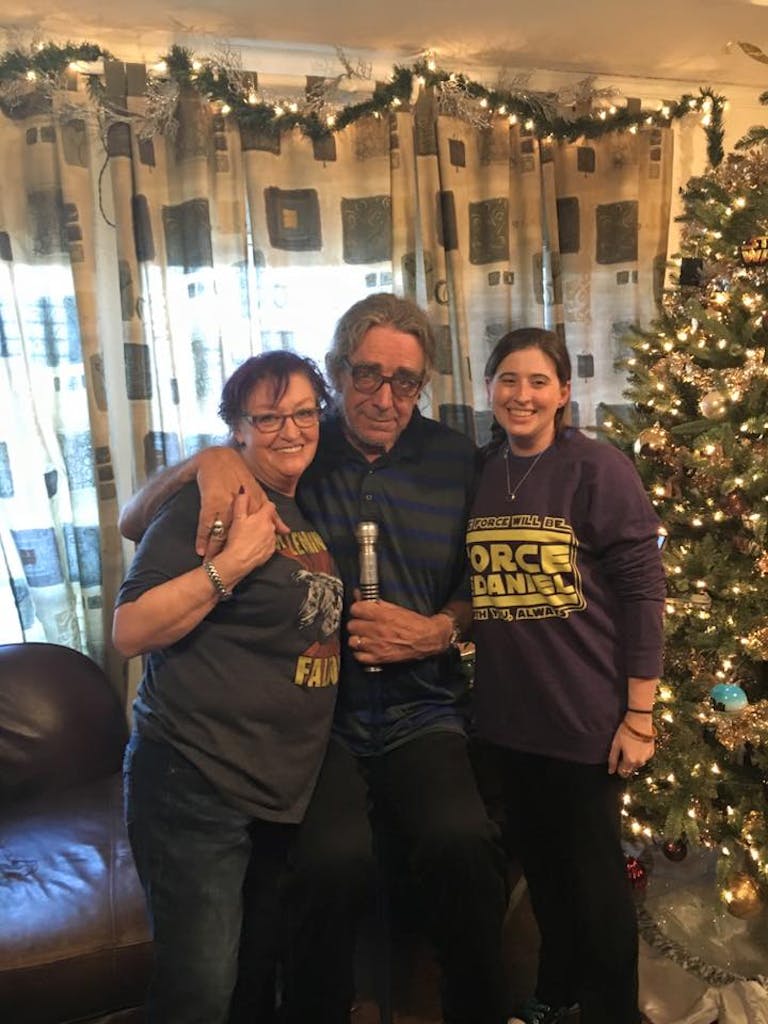 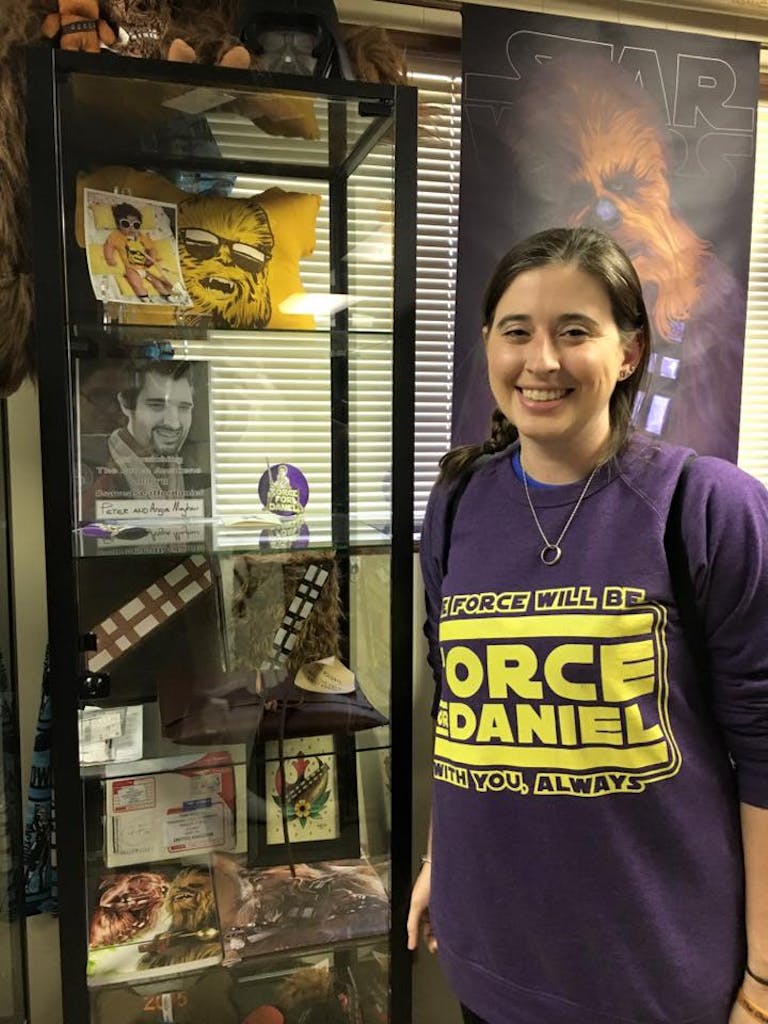 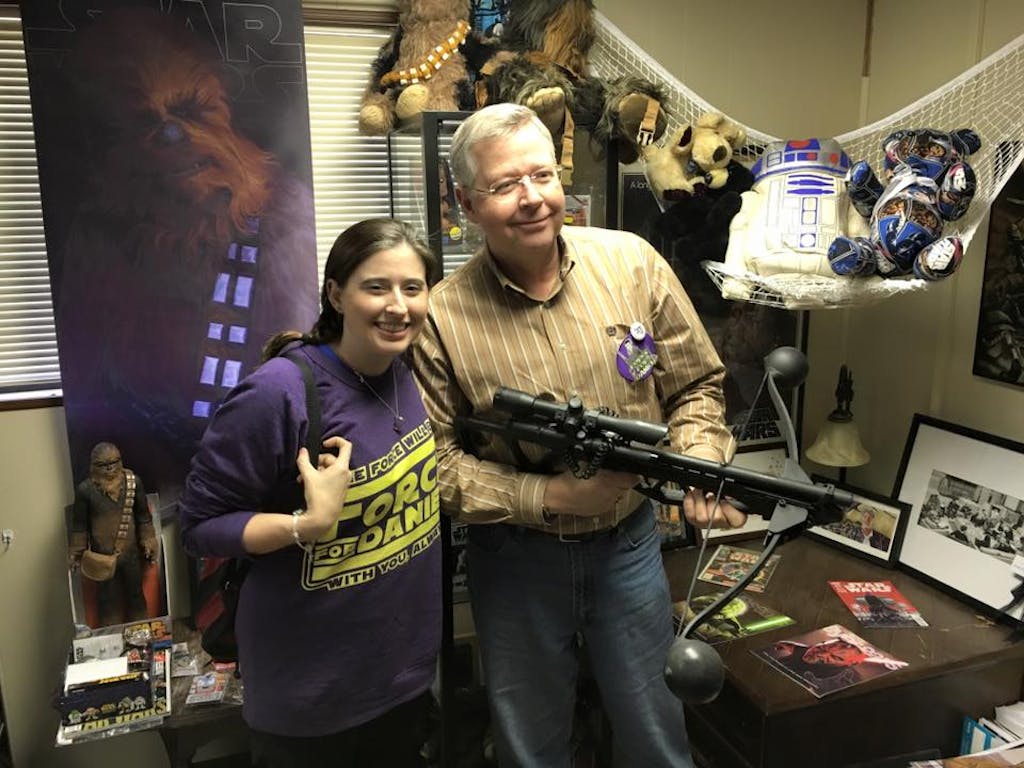 The Mayhews seem like eminently decent people (as Ashley notes, they even added a photo of her husband to one of the display cases in their Chewbacca museum), and it’s nice to see her smile during what must be an impossibly difficult time.

Those who want more details on how exactly the screening of The Force Awakens came about, meanwhile, can learn about it from a post she shared on Facebook over the weekend. She details the way the technician who controlled the screening would pause the film when Fleetwood would drift out of consciousness, so he wouldn’t miss the best parts. It’s a sweet, heartbreaking story that—if you had the chance to see the movie in the comfort of a theater and in good health—should make you feel pretty grateful.