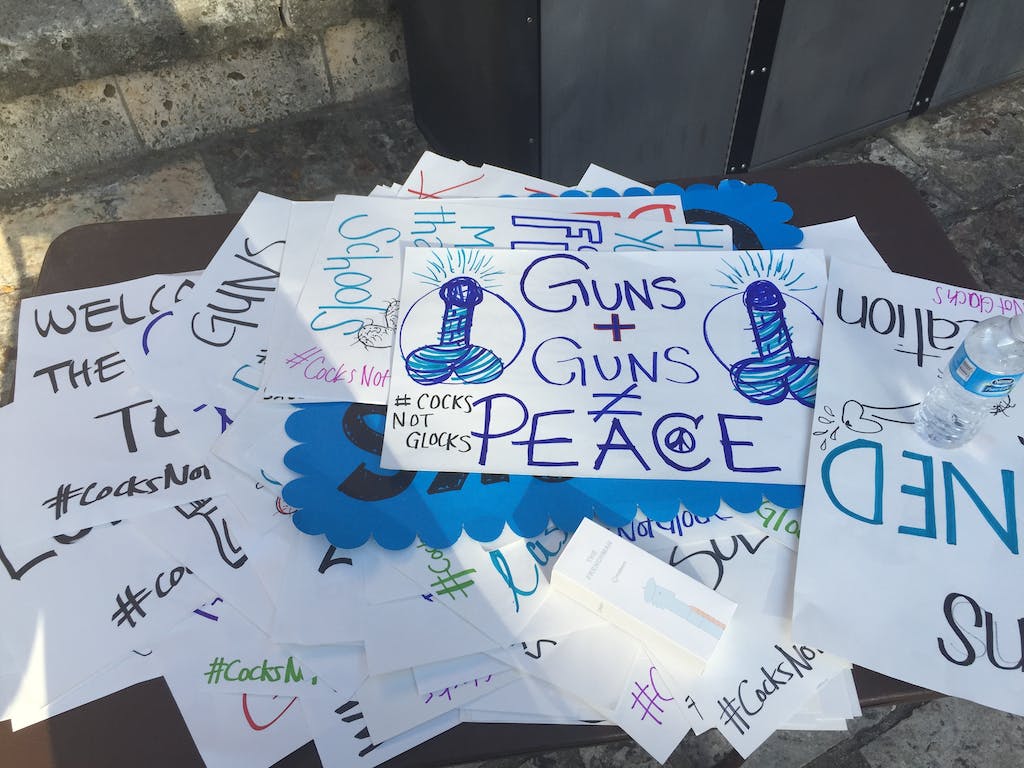 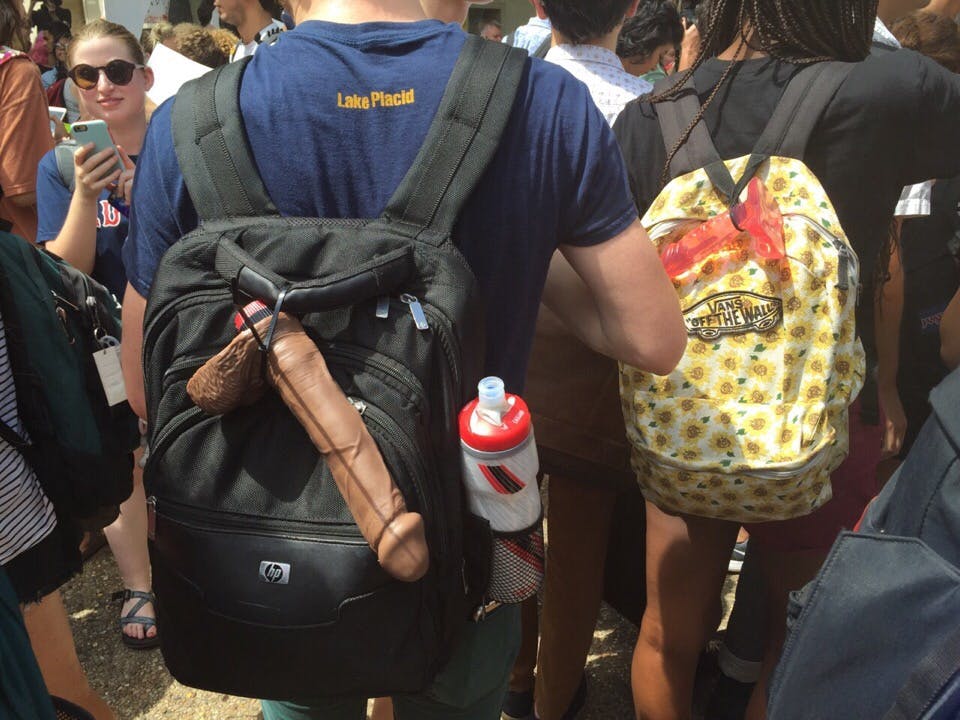 The protest joined forces with other campus organizations, namely Students Against Campus Carry and Gun-Free UT—a group made up of faculty, staff, students, alumni, and even parents opposing the campus carry law. On Tuesday, the evening before classes began, Cocks Not Glocks held a pre-rally on the West Mall of the campus to pass out sex toys so that students showed up to class prepared.

At noon on Wednesday, the group joined a rally in which dozens of Gun-Free UT members stood on the steps of the Tower to give speeches as Cocks Not Glocks passed out sex toys to students who happened to be passing through between classes. In addition to university professors, speakers included candidate for state representative Gina Hinojosa, Austin City Council Member Kathie Tovo, and Ana Lopez, the vice president of Students Against Campus Carry.

The rally’s overall message was one of persistence—something that anti-campus carry groups have maintained even after a recent blow to the movement. On Monday, a federal judge denied three UT professors’ request for a preliminary injunction on the law. The lawsuit claims that allowing guns on campus will ultimately infringe on the right to free speech. The university and the state argued that any “incidental impact” from the law wouldn’t infringe on First Amendment rights. 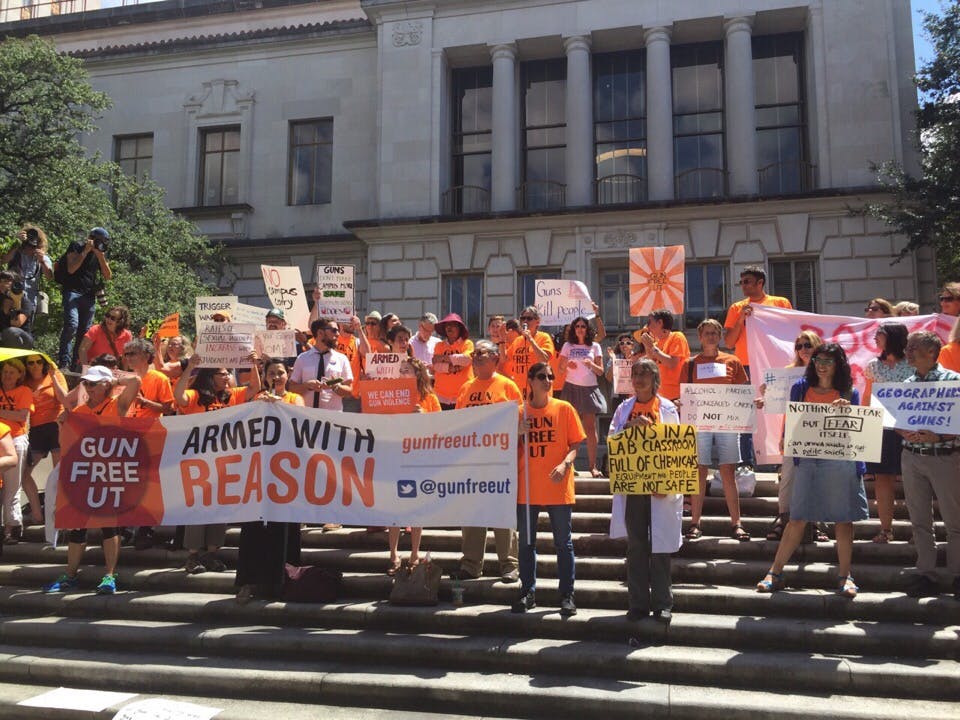 Mia Carter, an English professor and one of the plaintiffs of the lawsuit, took the stage during the rally to explain that guns “restrict and deter open and robust classroom debate,” and that they would continue on with the lawsuit. After all, as some rally signs read, they were “armed with reason.”

But Rebecca Johnston, a doctoral candidate and teaching assistant at the university, said that even with reason and facts conversations about campus carry have been frustrating. In her experience, which she detailed for crowds at the pre-rally on Tuesday, the common rebuttal has been some variation of “I’m a responsible gun owner.” To Johnston, these subjective arguments are contrary to the kind of engaged and open conversations TAs and professors try to foster in classrooms. She compared those interactions to “talking to a brick wall.” 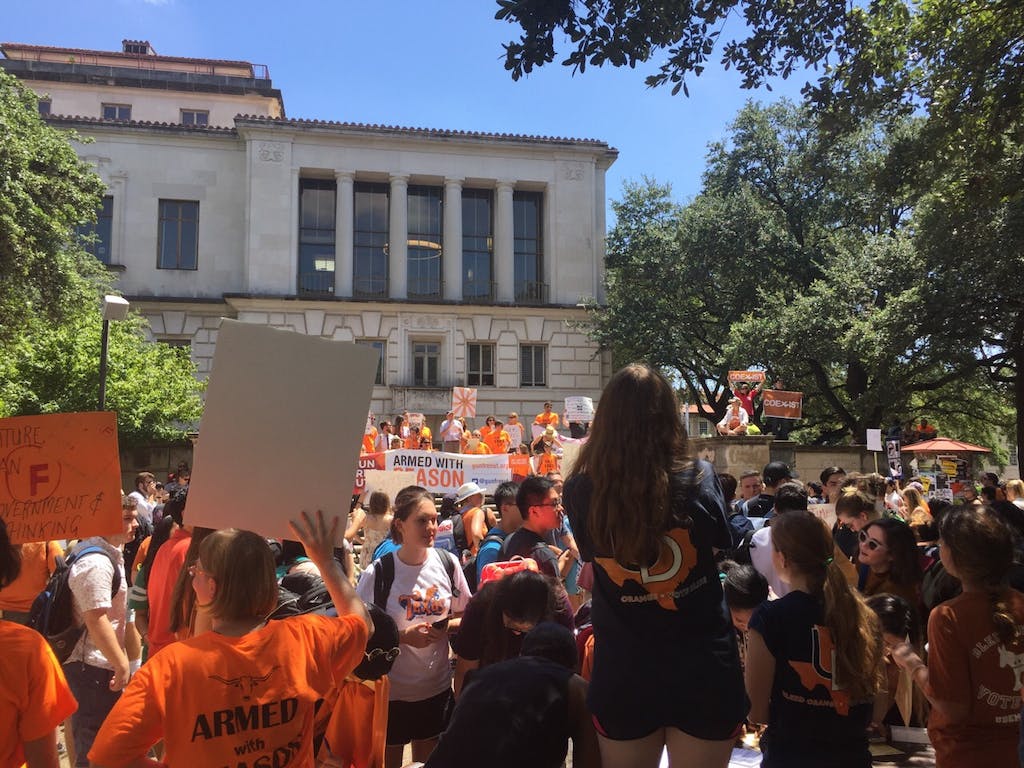 One of the arguments that gun rights and campus-carry advocates have leaned on is the idea that “good guys with guns” can help in situations of mass shootings. But statistics show that even trained police officers have low shooting accuracy. In a Time report on bystanders shot during police shootings, reporter Nate Rawlings wrote:

According to a 2008 RAND Corporation study evaluating the New York Police Department’s firearm training, between 1998 and 2006, the average hit rate during gunfights was just 18 percent. When suspects did not return fire, police officers hit their targets 30 percent of the time.

As Rawlings noted in the piece, “firing accurately in a stressful situation is extremely hard,” yet students should expect to rely on the heroics of citizens who’ve presumably received less gun training than law enforcement.

“It’s absurd,” Jin said. “You’re telling this to people who live on statistics and research and analysis—they’re trying to feed this to us and we don’t buy it. And I feel like a lot of women and people of color and the LGBTQ community, they’re especially out for this, because they’ve had this narrative of what safety means pushed on them. We walk down the street and they’re like, ‘if you had dick between your legs, like a real dick, or a gun, you won’t be harassed.’” 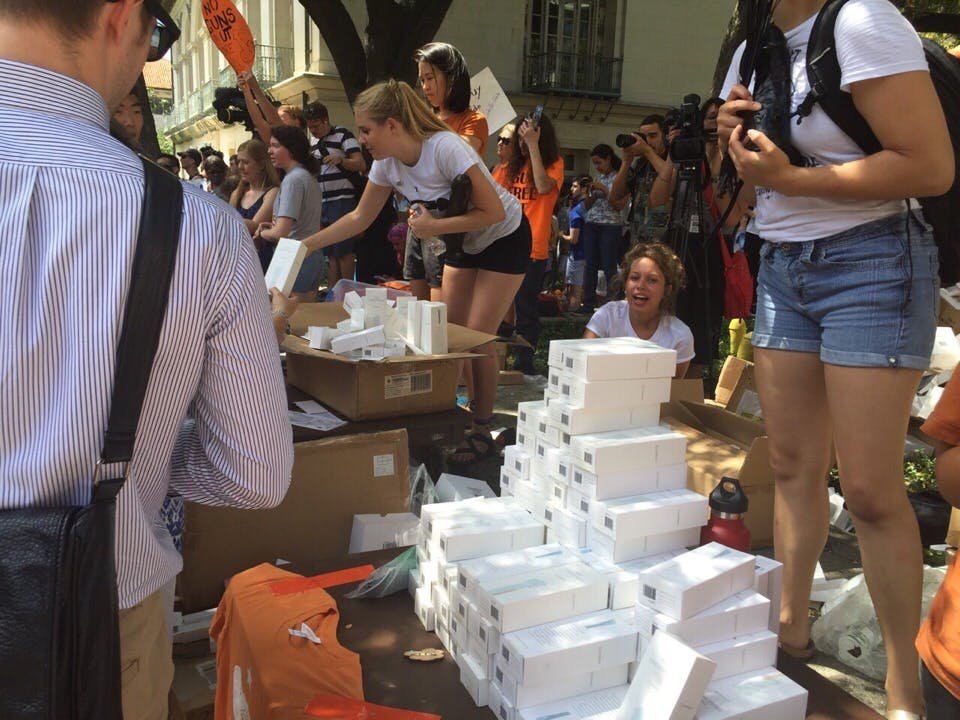 According to Jin, comments like that not only tell women how to respond to their own realities, but only continue to encourage violence rather than seeking long-term solutions. “It’s saying, ‘We don’t want to do anything about the reasons why people feel so much fear all the time, but we will leave you to your own devices by putting a gun in your hands,’” she said. “You’re on your own.” 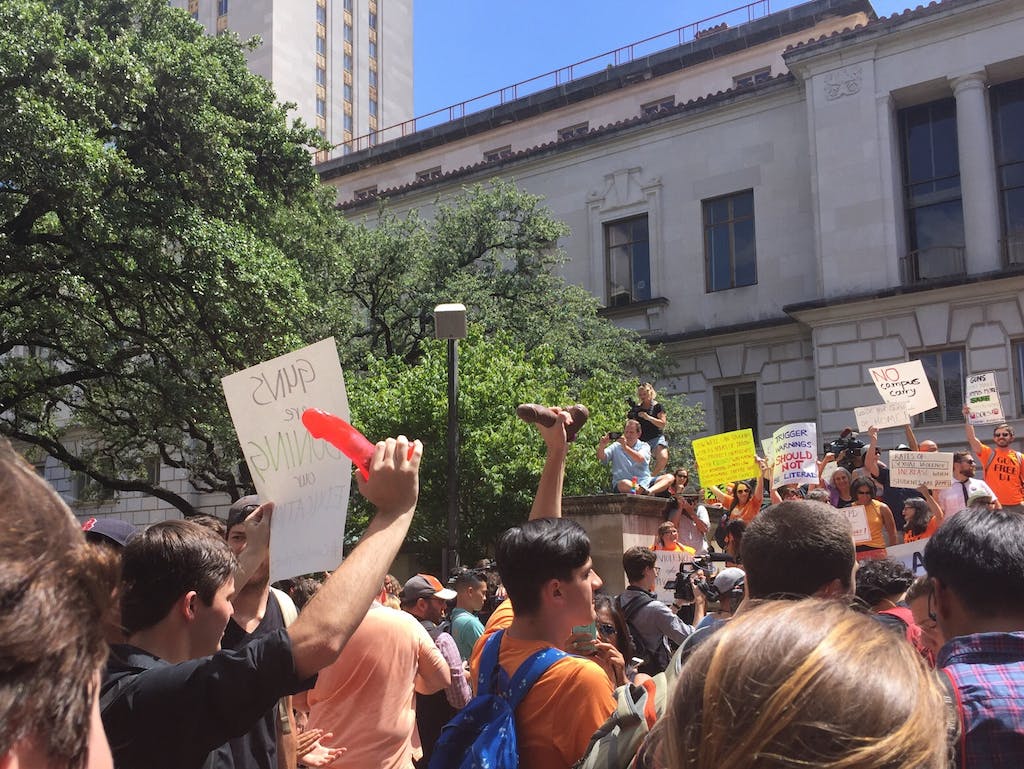 “But I wonder if gun owners feel that kind of self-consciousness when they go to public spaces where there are children around. Are they scared about misfire in an emergency situation?” Jin asked. “Are they like ‘this could be on me?’ Is that kind of awareness around? Is that kind of attitude still there? We’re just basically trying to challenge society to challenge itself. Hopefully that’s helpful.”

On Wednesday, after the Gun-Free UT rally ended around two in the afternoon, protesters moved in front of the Tower to film a segment with Roy Wood Jr. from the Daily Show. After leading the protesters in a “cocks not glocks” chant and brandishing a toy gun covered up with dildo as an example of how students could “legally” bring their sex toys to campus, Wood led the group down the steps of the Main Mall with a brass band accompanying them. The perfect absurd ending to an absurd protest of what the bulk of protestors that day would call an absurd law.

Seven Texas Teachers on the State of Education: “I’m Tired of Getting Punched.”

By Forrest Wilder and Maya Mojica

The Dallas Mortuary Accused of Producing the Worst Funerals Ever