Now that the NFL has apparently bestowed not one but likely two roses upon long-loveless Los Angeles, San Antonio is now the top pro football bachelorette city, and it already has an ardent suitor. That would be Mark Davis, he of the strawberry blond Lego-man hairdo and recent-ish heir to the skull-encrusted throne of the Oakland Raiders.

With the Raiders’ lease expired in Oakland, the team, at this moment, is technically homeless. And Davis has said he is quite prepared to throw the whole organization in a silver-and-black bandana, tie it to a stick, and beat feet out of the East Bay. “We’ll see where the Raider Nation ends up here,” Davis told reporters. “We’re looking for a home. I don’t know where we’ll be. My lease at the Coliseum is expired … America, the world, is a possibility.”

By “the world,” Davis might be referring to London, but as of now, the Jacksonville Jaguars seem the likelier candidate to fulfill Roger Goodell’s dream of global gridiron domination. So will likely land the raiders stateside, more specifically, in San Antonio, a city whose leaders Davis and other Raiders emissaries schmoozed back in 2014.

One prominent local in Davis’s corner is former mayor Henry Cisneros. “The stakes are so high for a city like San Antonio that is on the cusp of being an NFL market that it is worth making every effort,” Cisneros told reporters. “This may be our best chance in decades.”

The Alamo City’s business community is greasing up the welcome wagon’s wheels, according to local mogul and former Minnesota Vikings owner Red McCombs. In an ESPN radio interview last week, McCombs claimed to have twelve corporate sponsors lined up alongside him, and added that there were any number of potential stadium sites on which to build a permanent home for the Raiders. McCombs also volunteered to invest in the team, if that is what it takes to bring the Raiders to town. “We would be happy to be investors if that what he wants, he said. “We have investors lined up if that what he wants. If he wants to keep it all to himself, that’s OK too.”

But is San Antonio an NFL market? And is there room in Texas for three pro teams? Yes and yes.

If Florida, New York/New Jersey, and California can support three teams, so can Texas. If Indianapolis, Nashville, and New Orleans can support even one, so can San Antonio, especially if the new stadium, one that would be inevitable should this move occur, is convenient to Austin. Taken together, the San Antonio and Austin metro areas are home to more than 4.3 million people: a little bigger than Greater Detroit, and significantly larger than most NFL markets.

The city proper’s pro sports loyalty is demonstrable; aside, perhaps, from the Cowboys, no Texas pro fan base is as fanatical as the Spurs’, whose condescending devotees simply can’t understand why even native-born Houstonians or Dallasites would root for the Rockets or Mavs. (Spurs fans are weird like that. Most fans can take it as a given that supporters of opposing teams are born into that cult and unlikely to change. Spurs fans, like Aggies and evangelical Christians, attempt to convert you, and seem aggrieved when you prove deaf to the Gospel of Pop.)

And the Raiders, Oakland, and San Antonio all seem to share a sort of Sons of Anarchy vibe. With Houston putting on airs during the latest oil boom, San Antonio has acceded to the title of Texas’s most blue-collar city this side of the Panhandle and El Paso. Oakland is the spiritual home of the Hell’s Angels, San Antonio seems to have more Bandidos per capita than even Greater Houston, their birthplace. And hey, both the Spurs and the Raiders sport silver and black.

Let’s not forget about Austin: the city now swarms with transplanted Californians, some of them surely Raider fans from birth, not to mention hordes of pro sports-loving transplants who don’t give a tinker’s damn about UT, A&M, or any other NCAA team.

Last, and this is big, there’s the stadium issue. The Alamodome would suffice as a temporary home, but Davis would demand a sparkling new pleasure palace, perhaps not on the order of JerryWorld, but at minimum on the level of Houston’s NRG Stadium. And here’s where it gets interesting. Three sources have told Bleacher Report’s Jason Cole that Davis has already purchased land north of San Antonio and south of Austin. (Cole points out it could be merely a gambit to increase Davis’s leverage with Oakland. And mere ownership of the land is significantly less than half the battle: voters and business leaders would have to agree on financing the place to the tune of a billion or so.)

So given the chance, the culture of Raider Nation would find purchase in the semi-arid soil of San Antonio, and it would be fearsome (and probably zealous, given Spurs fans) to behold.

Which brings us to the second question, which involves Jerry Jones and Bob McNair.

Despite the best efforts of Bum and Earl, Oilers fanaticism never quite escaped the Gulf Coast and Southeast Texas. If anything, the Texans have ceded even more territory to the Cowboys, even as both teams have struggled for years, the Cowboys did so with high drama, while the Texans were simply steadily dismal.

Take a look at this 2014 NFL fan map from Twitter: 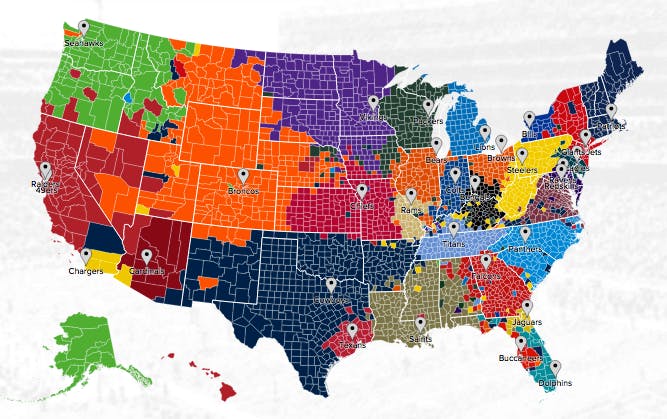 As you can see, Cowboys mania still afflicts all but a few dozen of Texas’s 254 counties, most of New Mexico, and virtually all of Arkansas and Oklahoma. 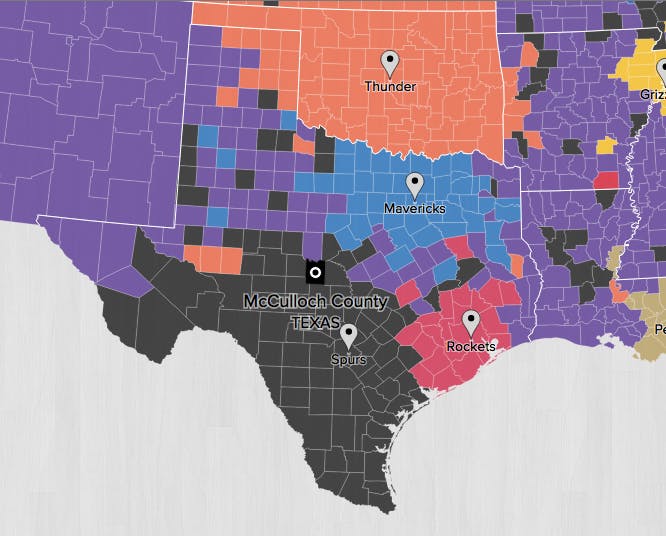 There are the Rockets, stuck with pretty much the same compact fiefdom that’s ruled over by the Texans (and the Astros, for that matter). But look at Spurs nation! It’s got the Valley and all Southwest Texas on lock, as well as much of the Hill Country and even some of the South Plains and even East Texas.

Yes, the Spurs are a dynasty, and basketball is not a religion in Texas (as attested to by the high number of front-running Laker fans) But might that map not foretell what could happen if the San Antonio Raiders came to be? And who would stand the most to lose from such an arrangement? Certainly not Bob McNair and the Texans. Although he likely wouldn’t welcome the competition, unless and until they become Super Bowl contenders, the Texans seem stuck with Greater Houston, the Big Thicket and the upper coast.

Nope, the greatest threat would be to Jerry Jones and the Cowboys, and it seems likely he would do his best to persuade his fellow owners to prevent a move to a city that would likely bisect his fan base in one fell swoop. And as Arlington’s Hillbilly Sith Lord no doubt realizes, those fan maps only tell half the story. With San Antonio’s close cultural ties to northern Mexico and especially Monterrey, Los Vaqueros would likely be losing their stronghold south of the border as well.

Under Tom Landry, you could say the Cowboys really were America’s team. Under Jones, they have lost that mantle, but have remained Texas’s and Mexico’s team. Should the Raiders put down stakes in San Antonio, the Cowboys could wind up with a fanbase restricted to northeast Texas, Oklahoma, and Arkansas. That prospect has to have Jones gagging on his Johnny Walker Blue, and it’s why everyone expects him to go the mat to prevent it from happening.

But does Jones have the clout? A move to San Antonio would require the approval of 24 of 32 owners. McNair and Jones would likely vote no, Jones with more fervor than McNair. Could he twist six more billionaire arms to vote his way? Does he have Francis Underwood-level dossiers on a half-dozen of them? What would be his stated rationale (aside from blatant self-interest) for denying a wayward team from America’s most viable open market that happens to be between two of the fastest-growing cities in the land?

The soap opera continues… But back in August, Texas Monthly‘s Dan Solomon asked “Is the Dream of the San Antonio Raiders Still Alive?”

To claim the Raiders, San Antonio needs three things: They need Los Angeles to get the Rams and the Chargers, they need the Raiders to really fall in love with San Antonio as a backup plan, and they need to agree to build a stadium for the team.

Check off the first, the second is unknowable right now (though it appears San Antonio’s business elite pulling out all the stops to woo the Raiders), and the third remains around the corner. But as of now the future existence of Los Raiders has gone from long shot to even money.