Go walk around downtown Austin and start counting the adult men you see until you get to fifty. Statistically speaking, apparently one of those guys you just saw is a young lady’s “sugar daddy,” which means he pays for her living expenses, provides her with exciting vacations, and showers her with gifts—and she, er, provides him with companionship. Or, as the sugar daddy/sugar baby networking site SeekingArrangement.com defines it:

Successful men and women who know what they want. They’re driven, and enjoy attractive company by their side. Money isn’t an issue, thus they are generous when it comes to supporting a Sugar Baby.

Attractive people looking for the finer things in life. They appreciate exotic trips and gifts. Sugar Babies get to experience a luxurious lifestyle, and meet wealthy people on a regular basis.

We aren’t going to argue for or against any sort of relationships between consenting adults, but we are going to explore the numbers that the site offers, because Austin’s data is something of a surprise. Specifically, SeekingArrangement claims that there are more sugar daddies in Austin than there are anywhere else in the U.S., with 23.24 sugar daddies per 1,000 adult males. 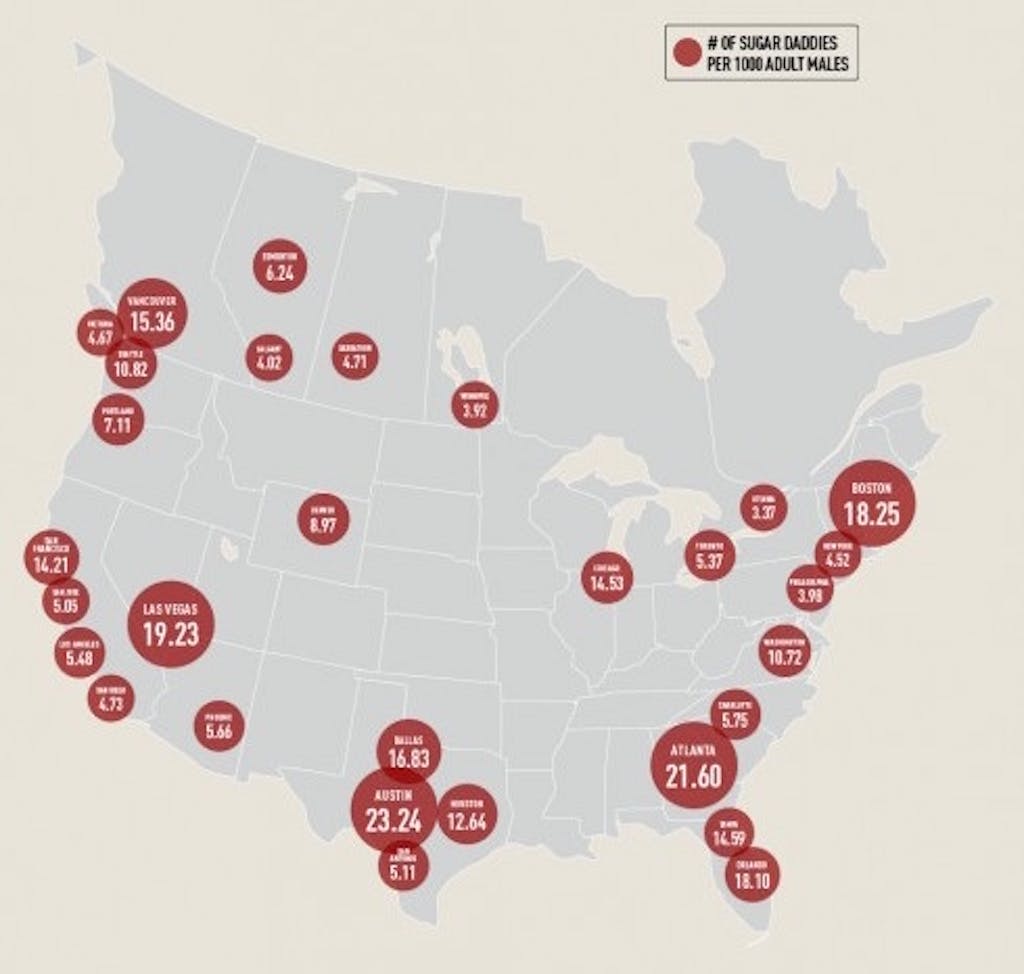 That’s an awfully big, red circle for Austin—Dallas and Houston, also apparently noted sugar daddy cities, barely even compete!—and it seems, perhaps, a bit unlikely: The company confirmed to CNBC that when it says 23.24 per thousand, that translates, in real numbers, to more than 9,000 men involved in or seeking a sugar daddy/sugar baby relationship in the city.

The company’s Austin site, meanwhile, also boasts that the “women in Austin, Texas outnumber the men 5 to 1, greatly increasing your odds of meeting a sugar baby that you click with.” That vague language absolutely cannot refer to the number of women in the city as a whole: According to 2014 Census data, women account for 49.4 percent of Austin’s population. The Census also tells us that there are 320,000 women in Austin between the ages of 18 and 65, so if SeekingArrangement says that the number of women on the site outnumber men five to one, wow: That means if a woman and six of her girlfriends are out to brunch, statistically speaking, one of them is a sugar baby.

The idea that 2.32 percent of Austin men might be looking for “a beautiful, ambitious college student, aspiring actress or model, or single mom”—the self-proclaimed bulk of the site’s female clientele—to pay an allowance in the neighborhood of $4,000 a month in exchange for the pleasure of her company may stretch credulity, but who knows? Austin’s demographics are shifting, and there are a lot of new, well-paying tech jobs that could feasibly bring enough men with a very disposable income, a lack of free time to socialize more traditionally, and a very specific sense of the sort of woman they deserve to the city.

However! While there is no shortage of beautiful, ambitious college students in Austin, or aspiring actresses/models, or single moms, let’s dig into the idea that they really outnumber the fellas five to one. There are 26,067 female students at the University of Texas—a figure that includes grad students and women of any age. Certainly it’s feasible that some of them are interested in being some dude’s sugar baby, sure. But given that SeekingArrangement contends that the majority of its sugar babies are college students, to get anywhere near that 45,000 number, we’d have to assume that basically every single female student at the University of Texas is a sugar baby. That does not seem likely.

But let’s be real here: The text on SeekingArrangement’s Austin site is probably bull. It’s written for sugar daddies—the site’s actual paying users (sugar babies can use the site for free)—so telling them that there are five ladies for every guy is an awesome way to convince ’em to pony up $50 a month for a membership. It’s inconceivable that one out of every seven Austin women between the ages of 18 and 65 is on SeekingArrangement—the site is for women in their late teens to mid-twenties, hence “sugar baby“—which means that we can also pretty safely discount any of the other figures provided by SeekingArrangement. If they’re making up the stats about how many women are on the site, why would you trust them about anything else?

All of this feels especially suspicious given the recent Ashley Madison hack. Until the data was released, news outlets credulously reported statements from the company that claimed that 15,000 women joined the site the day after Mother’s Day. Of course, after that company was hacked, it was revealed that almost no women actually used the site. Gizmodo reported in August that “out of 5.5 million female accounts, roughly zero percent had ever shown any kind of activity at all, after the day they were created,” offering damning evidence that strongly suggested that almost all of the “female” users on the website were actually fake accounts intended to lure men to sign up.

As business models go, selling men fantasies about the young hotties who can’t wait to enter into an “arrangement” for a few grand a month seems like a viable one. And we do believe that there are actual, real women on SeekingArrangement—we’re just, ahem, extremely skeptical of the site’s numbers. There may be more potential sugar daddies in Austin than anywhere else in the country—they’ve got to be somewhere, anyway—but everything else about the numbers here is awfully suspect.