A group of police officers stood in front of the Alamo Drafthouse on Lamar in Dallas, directing the hordes of people.

“Rally this way,” an officer said. “Protest this way.”

With or Against. Division seemed to be the theme of the night when Trump came to Dallas yesterday, one year to the day he first announced his candidacy for President. The family walking by in Ducks Unlimited shirts: With. The young men holding up the MAKE AMERICA GAY AGAIN sign: Against. Politics has always been, divisive, but now there are layers of irony and subterfuge that complicate things. It feels like people on both sides are on guard against even the slightest dissent, anything that might break the spell of uniformity. 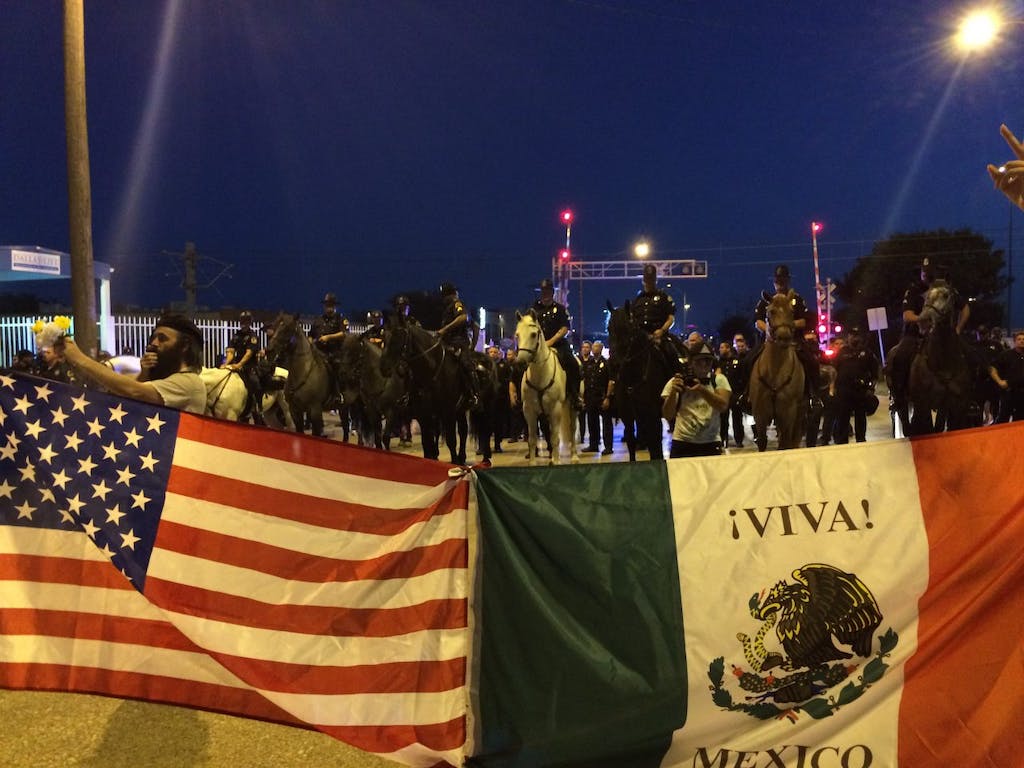 And at some point, the line between reality and parody gets blurry. Last night, there was the young man twirling around in an estate-sale bridal gown, with a flag draped over his shoulders like a cape, who explained that he was “trying to stay in character.” An older man near the back railing who kept yelling “America! America!” and then “Donald J. Trump! Donald J. Trump!” appeared to be mocking supporters—until it was clear he wasn’t.

Assessments can also change quickly. Consider a scene further south on Lamar, where a handful of Trump supporters were having drinks on the patio of Pub Full Circle Tavern.

“Trump people this way,” a woman said as a small group of pedestrians walked by. “Illegals that way.”

A man sitting at the next table over joined her in the directing.

“Americans this way,” he said to the next group walking by on the sidewalk. “If you hate America, go that way.”

“Where are you from?” the woman on the patio asked him. “Are you legal?”

He said he has two sons in the military, both stationed in South Korea. He pulled out photos. The man drinking on the patio—the one who’d decided all the protestors hate America—came over to look at the photos with a skeptical eye. He examined them closely. Then he turned to the Latino man and shook his hand.

“You’re a great American!” he said.

As the older man walked off, the woman on the patio went back to directing traffic. “Trump this way,” she said. “Illegals that way.”

Inside the rally, the Withs and Againsts were easier to delineate. The young men in tank tops and backwards red caps: With. The men in suits and red skullcaps: Trumpers. The woman being escorted out while shouting that “Hate is not American”: Against.

The crowd was told over the PA that this was a non-violent gathering. That Donald Trump supports the First Amendment. But that this was a private event, paid for by Trump himself. If someone disrupts, the crowd was told, Trump supporters nearby should not attack the person. They should instead stand by with their Trump signs in the air, shouting “Trump! Trump! Trump!” until security personnel arrive and remove the protestor.

Early speakers included Robert Jeffress, the controversial preacher from First Baptist Dallas, conservative talk show host Mark Davis, and Tarrant County Commissioner Andy Nguyen. Nguyen told the crowd about how his family escaped Vietnam, and about how much he treasures freedom. He recounted a story about how long his relatives waited to immigrate legally. The point of the story was, ostensibly, to describe a broken immigration system that incentivizes breaking the law. But before he could make it to the applause line, a man in the audience yelled out, “We don’t want them here!”

Trump finally took the stage a little after 7 p.m., as “Deep in the Heart of Texas” played from the speakers. He complimented the crowd. He said he loves Texas, that he has many friends in Dallas. He said he’s considering “moving to the South.” When a woman shouted that she loved his hair, he said it was the nicest thing anyone could ever say about him. A few minutes in, he said he’d read about this place, Gilley’s.

“Where’s that horse?” he said, referring to the famous mechanical bull. “I wanna go on the horse. You wanna hit the papers tomorrow? Let’s get that horse. I’ll ride that horse.” He added, “Even if I make it, they’ll say I fell off the horse.” It’s possible Trump has never seen Urban Cowboy.

He spoke for about an hour, shuffling from one topic to the next, hitting the classics to amp up the audience. He went almost an entire hour without explicitly mentioning the wall, despite periodic shouts of “Build that wall!” Then he closed with it, like Lynyrd Skynyrd holding off on Freebird until the very end.

The crowd returned heavy BOOs when he mentioned the media and Obama; mention of ISIS, however, didn’t get as vociferous a reaction. The presumptive Republican nominee also spent a lot of time saying nice things about Bernie Sanders and his supporters, noting that Sanders is “right about trade.” Trump listed off most of the states he’d won in, highlighting the final showdown in Indiana. He named a few sports figures who had endorsed him, including Bobby Knight and Lou Holtz and Don King. He told the crowd he was supported by the president of NASCAR—“Do you folks like NASCAR?” The audience applauded politely. That endorsement seemed especially appropriate, since so much of the rally consisted of people standing around waiting for ideological collisions.

Yet those were in short supply last night. The vast majority of both the rally and the protests outside were peaceful. At the door, TSA agents sent attendees through metal detectors and inspected wallets and purses. You could bring in small American flags, but not the tiny sticks they’re attached to. One man wearing a COME AND TAKE IT shirt handed over his belongings to an agent at a table—and the agent took them. There were security personnel, both Secret Service and private, throughout the venue. Most protestors only got to shout for a few seconds before being escorted out, and some left voluntarily.

There were some tense moments, though. One man held up a small banner that read VETERANS AGAINST HATE and was immediately surrounded by chanting Trump supporters. A man wearing a blue tank top and a backwards Trump hat started hitting him in the head with a Trump placard before security broke it up. Outside, a photographer named Danny Fulgencio, working for the Dallas Advocate, was hit with a rock and a quarter-inch gash on his forehead gushed blood onto the pavement in front of Alamo Drafthouse. Trump supporters and protestors stood a few feet apart, shouting at each other for a few minutes. A group of young men with Trump hats mocked the short haircut of a lesbian on the other side. Protestors wore DEPORT TRUMP shirts.

But like the speeches, that too got predictable quickly. And the Dallas Police eventually stopped differentiating the Withs from the Againsts and pushed everyone down Lamar, past the movie theatre, and around the corner. By nightfall, most of the 4,500 or so rally-goers and the 1,000 or so protestors had dispersed. Officers on horseback directed everyone remaining toward downtown.

“Where are we all going?” someone asked one of the officers.