The center of the space race is Texas. The first word ever spoken on the moon was “Houston,” and even after NASA faced funding cuts and discontinued the shuttle program, space—and the race to find new ways to get there—remained right here: In one corner, over in West Texas, Amazon founder Jeff Bezos’s Blue Origin continues to pursue manned spaceflight. In the other corner. In the other corner, Paypal and Tesla Motors founder Elon Musk’s SpaceX attempts to do the same thing down in the Rio Grande Valley.

The competition is perhaps less fierce than the Cold War battle to see whether the Soviets or the Americans could claim ownership of outer space, but that doesn’t mean it doesn’t get heated. And after Blue Origin managed to do the  pretty difficult task of sending a rocket up into space and then landing it safely back at its West Texas launch site, prompting boastful tweets from Bezos on Twitter, things got downright snippy between the two gazillionaires.

First, let’s watch Bezos’s rocket go up and back down, because that is a pretty neat thing that humans are able to do:

Then, let’s take a look at the bickering that went down between two of the richest human beings to ever live on this planet (or any other, for that matter).

Bezos tweeted—for the first time since joining the service in 2008—to declare the successfully landed rocket “the rarest of beasts,” and boasted about how his team made it “look easy.”

The rarest of beasts – a used rocket. Controlled landing not easy, but done right, can look easy. Check out video: https://t.co/9OypFoxZk3

Bezos surely wanted the world to know how big his rocket is (er, so to speak), which drew Musk out to declare that—just so we all knew—his rocket was just as big.

The rocket-measuring contest started off congenially enough: Bezos tweeted about his success, and Musk tweeted a congratulations to his competitor, big-upsing the Blue Origin team for succeeding on a vertical take-off and landing—before pointing out that what they did wasn’t actually that big of a deal, because they just sent a rocket into space, not into orbit.

It is, however, important to clear up the difference between "space" and "orbit", as described well by https://t.co/7PD42m37fZ

The link Musk cites dismisses the idea of going to “space” as something of a misnomer, at least if you’re thinking about it the way that astronauts do:

Getting to space is easy. It’s not, like, something you could do in your car, but it’s not a huge challenge. You could get a person to space with a small sounding rocket the size of a telephone pole. The X-15 aircraft reached space just by going fast and then steering up.

After explaining to his 2.95 million Twitter followers that Bezos’s rocket went to space, but not, like, space space, Musk turned his attention to an audience of one, playing “whose rocket is bigger” with Bezos.

@JeffBezos Not quite "rarest". SpaceX Grasshopper rocket did 6 suborbital flights 3 years ago & is still around. pic.twitter.com/6j9ERKCNZl

That’s a fun little zing at a competitor who was apparently trying to steal some of his shine—or at the very least, it’s clear that Musk doesn’t want Bezos to get credit for landing an orbital rocket when it’s just a suborbital rocket, which, you know, your kid has probably done in the backyard a million times.

But the real joy of this is watchingzillionaires air out their grievances over one of the only things they have left to want—credit for being the best—in public, where we can all watch and realize that the mega-rich are just as petty as the rest of us. 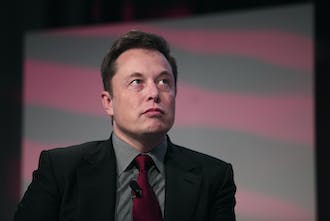