H-E-B is a beloved Texas institution for a simple reason: it’s one of the best supermarket chains in the country. Its stores are also limited to a regional belt of locations throughout Texas, plus a few in northern Mexico, which means that if you leave the state (or even move to Dallas), the beloved H-E-B products you may have grown addicted to are no longer available to you—a fact that many Texpatriates have lamented even as they scour Amazon for a way to get a case of Topo Chico delivered to Missouri at absurd rates.

Native Texans living outside of our fair borders need worry no longer, though. H-E-B has heard their cries, and as of this week, launched an online store that offers both products specific to its stores and a range of items that are hard to find outside of Texas—available to be shipped to 46 states and military bases throughout the world.

We pored through the catalog available on H-E-B’s website to find an array of items that, if you’re reading this from Wisconsin or New York or Montana, you might be missing.

Outside of Texas, store-bought salsa in this country is, er, not all that great. Remember the old Pace picante sauce commercials where the cowboys get all “New York City?!?” about the sauce some joker brings to the cook-off? It’s basically like that, but in real life. There are certainly fine Mexican grocers in cities around the country, but if you don’t know where to find ’em—or if you’re, like, living in the suburbs in Vermont these days—you’re probably gonna miss this no-holds-barred spicy salsa.

The Austin-based Sweet Leaf definitely sells the best Black Sabbath–inspired packaged iced tea on the market—and though it has made inroads around the country since being purchased by Nestle in 2009, it’s still a hit-or-miss proposition to find the company’s products in stores outside of Texas. Unless you’re ordering them from a Texas supermarket, that is.

The partnership between H-E-B and Whataburger just fits: like peanut butter and chocolate, or honey butter and chicken biscuits, they’re two great tastes that go even better together. H-E-B exclusively sells the Whataburger condiments and fries in its retail stores, and though Whataburger has offered those products online in its own store for a little while now, the fact that you can get them in limited quantities and combine the shipping with a bunch of other stuff that you actually want is a pretty tasty deal.

To be certain, these Texas-shaped tortilla chips are less of an essential and more of a novelty—but when you live in Texas, you become accustomed to the wide array of Texas-shaped novelty crap that you can buy basically anywhere. They don’t do that stuff in Utah (wheee, a square with a tab on top!), so Texans who want to show their new out-of-state friends exactly how obsessed with Texas people in their home state are can do so with a tortilla chip that’s pretty good—and shaped just like home.

So, to be clear, the people queueing up for hours for Franklin Barbecue ain’t doing it for the sauce—they’re in it for the brisket. But that doesn’t mean that Aaron Franklin’s array of sauces, headlined by the “espresso” variety, aren’t friggin’ delicious. The store licensed its sauces exclusively to H-E-B, which has been good news for Texans who want a perfect complement to their own smoked meats—and now it’s good news for people around the country who want what passes for barbecue where they live to at least be accompanied by some Texas greatness.

For supermarket coffee, H-E-B’s is pretty good—and because coffee is the sort of thing that, once you acquire a taste for a certain blend, you’ll miss it forever, the idea that you can just get some of your hometown coffee (we went with “Taste of San Antonio” here, but the options in the store are vast) simply by clicking “add to cart” is a bona fide miracle. 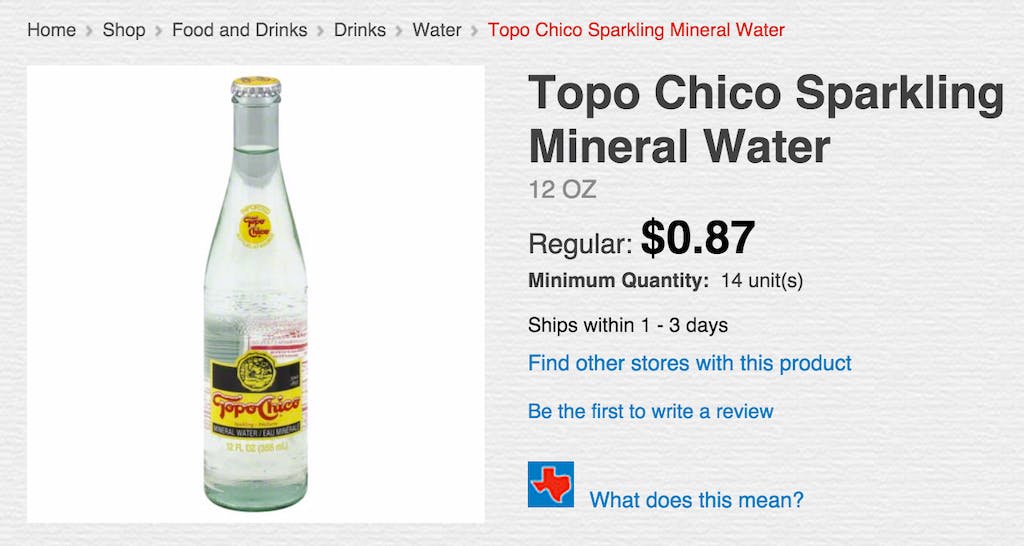 The space that Topo Chico occupies in the hearts of Texans is downright remarkable. There are a variety of sparkling water options out there, but the only one that counts for many Texans comes in a glass bottle and ignores all flavors except for lime. It’s also bottled in Monterrey, Mexico, and tough to find in other parts of the country. It exists around the U.S., but it’s nowhere near as ubiquitous in the Midwest as it is in Texas, where it basically flows like—well—water. Those who’ve struggled to find it in their new homes can now get it for $0.87 a bottle (with a fourteen-bottle minimum—but why wouldn’t you want more Topo Chico?).