Enough ink has been spilled about Franklin Barbecue—much of it by us—for anybody even remotely interested in smoked meats to have made a decision: Either they love it, or they are not interested in getting up early and waiting in line for five hours to find out if they love it.

A mini-economy has sprung up for Franklin-o-philes whose jobs/sleep schedules/sense of self-respect prevent them from spending hours in line. Line-waiting businesses, such as the one started by precocious thirteen-year-old Desmond, and similar businesses like Favor, Postmates, and the countless folks on Craigslist, have made it possible for brisket lovers to get their fix and patient entrepreneurs to make some cash.

Alas, those people are going to have to find other ways to make money, because the prestigious joint has banned stand-ins from getting in on the business. As of Sunday, Franklin Barbecue is just for people who wait in line themselves.

“It has gotten out of hand, and we owe it to the rest of our faithful customers to not allow the distraction,” the Franklins said in a messaged statement. “As the amount of line holders has multiplied, the large orders have begun to bog down the line. We prefer to serve our customers in house, and not to have a second party representing our food and brand.”

Regular customers can still have a friend join them after waiting in line, Stacy Franklin said over text.

“We still want our regular customers to limit the amount of joiners they have,” Stacy Franklin said. “Our normal customers are very conscious of this, but line holders continue to push the limits of what is fair for others.”

That’s fair. At the very least, it’s Aaron and Stacy Franklin’s business, and they can run it however they want. If they only want to sell brisket to people who take the time to wait, that’s up to them. But, of course, people are mad about it. And the anger isn’t just directed toward the policy, but at the very existence of a Franklin Barbecue line, the people who wait in such a line, the business whose brisket inspires a line like that, and anybody who would dare claim that such a line is worth tackling.

Let’s take a quick look at the comments on the Austin American-Statesman blog post on the matter. 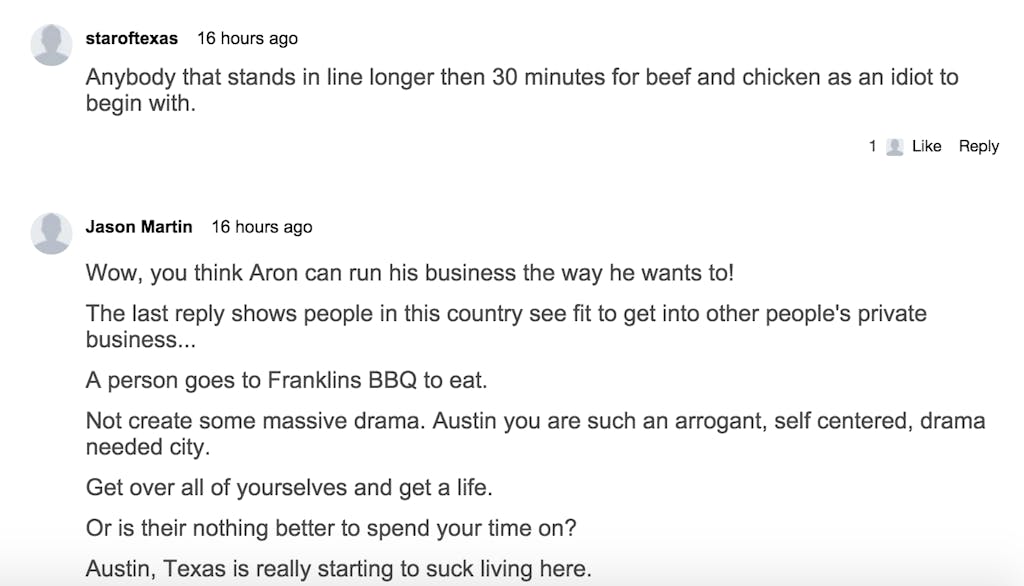 Lest you think that it’s just the readers of Austin’s daily paper who could feel so strongly, you can scan basically any discussion of the professional line-waiter ban at Franklin and find comparable sentiments. Here’s what the readers over at Eater had to say: 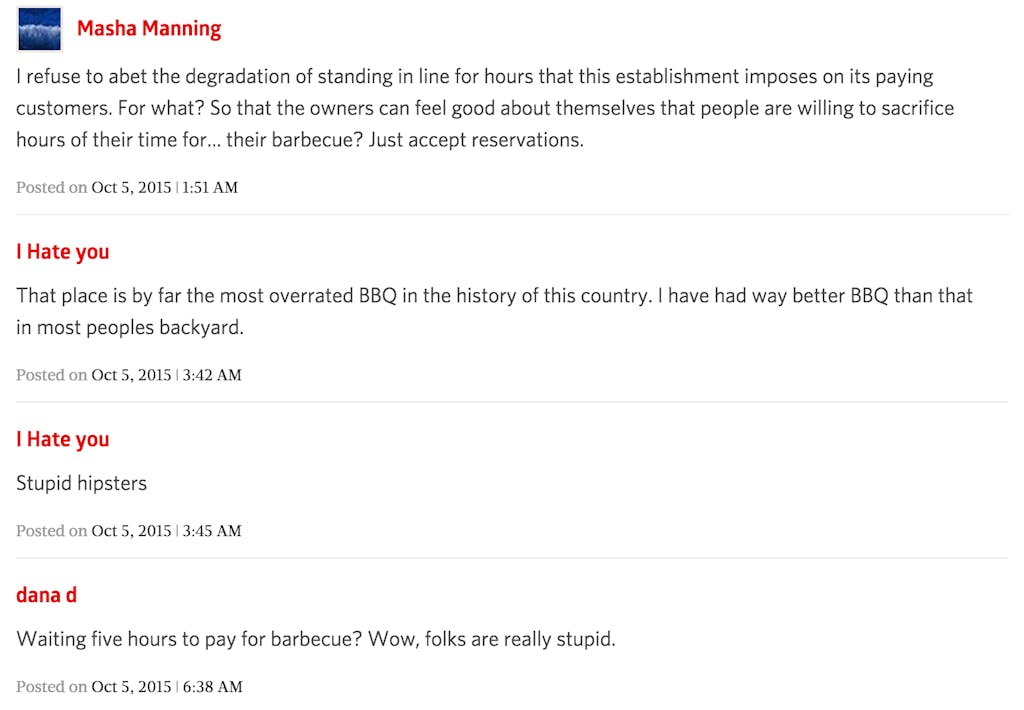 And over at the Houston Chronicle, where hating on Austin is a pastime enjoyed by Houstonians with a fervor not unlike the one Austinites experience when waiting in line for food, the responses are at least as strident:

Clearly, there’s a lot of resentment toward Franklin (that’s not even including Reddit, where a 226-comment thread continues to grow) and the people who have the time to stand in line for the world-renowned brisket. When that fury manifests itself in business advice—add another smoker, open a second location, or expand until your brisket is no harder to get than Rudy’s—it’s silly. We promise you, Franklin has considered expanding capacity or opening another location. At some point, they’ve looked out at the snaking line, considered whether it was something they wanted to address, and decided to continue on with the one location.

But that alone makes Franklin unique among Austin restaurants that have this sort of slavish following. Austin doesn’t really have a fine-dining scene, per se—critics are right when they say that the city has more of a trendy dining scene, which befits the atmosphere of Austin. The most popular places serve brisket, burgers, pizza, and sushi—and even at a hotspot like Franklin, Hopdoddy, Homeslice Pizza, or Uchi, you’re as likely to see patrons wearing cargo shorts and flip-flops as sport coats. Houston and Dallas do fine dining, but Austin’s culture prizes “cool” as currency in ways that the more monied cities in the state prize, you know, actual currency.

Still, Hopdoddy is a regional chain now, with nine locations around the country (and a tenth opening in San Antonio soon). Uchi has two Austin restaurants and locations in Houston and Dallas. Homeslice announced plans to bring a second location to North Austin in 2016. Generally speaking, those trendy Austin restaurants are interested in maximizing their potential profits by serving as many customers as possible, in as many places as they can.

Franklin, for their own reasons, have opted not to do that. And cutting the professional line-waiters is another sign that maintaining control over the customer experience is crucial for the barbecue joint. Money from Favor and Postmates drivers spends just as well as the dollars of people who lined up themselves to eat the brisket, after all. You might not get the point of waiting in line for five hours for brisket, but you can’t argue that what Franklin is doing doesn’t work.