By Inner Loop Houston standards, my wife and I live in a wilderness.

Our house sits on a hill—again, that’s by Houston standards—above a wooded ravine that empties into White Oak Bayou. Wildlife abounds. Coyotes roam the streets by night. I’ve fed Cheerios to a brazen raccoon, and once saw a four-foot king snake slithering across our backyard. Pileated woodpeckers—known in the Big Thicket as the “Good-God Bird,” because that’s what you say the first time you see one of these crow-sized behemoths—have returned to the area after a decades-long absence. And one of our own cats leapt through an open window one night with a flying squirrel in its mouth.

(That was one critter we managed to save – after we liberated it from Sailor’s fangs, there followed a couple of hours of chaos as little Rocky glided off into my wife’s closet, where we eventually found him cowering inside a shoe, remarkably unscathed.)

And oh Lord, the opossums. Generations of marsupials have called our backyard home. They are so bold and such a common sight that we’ve named them all. Before I moved in, it was the domain of one my wife dubbed Antonio, who was succeeded by Shirley, and now we have Mother Maybelle, the boldest, baddest opossum of them all.

We have five indoor-outdoor cats, and we sometimes leave the door ajar so the cats can come and go as they please. One night a couple of months back, my wife noticed that, by the sound of it, one our cats seemed particularly ravenous. No semi-starved kitty on a Purina commercial ever ate with such ear-splitting vigor: it sounded like a wolverine tearing into a big bag of Fritos. It turns out it was pretty close to that. It was Mother Maybelle, taking her place at the cats’ twin food bowls, right there in our dining room. 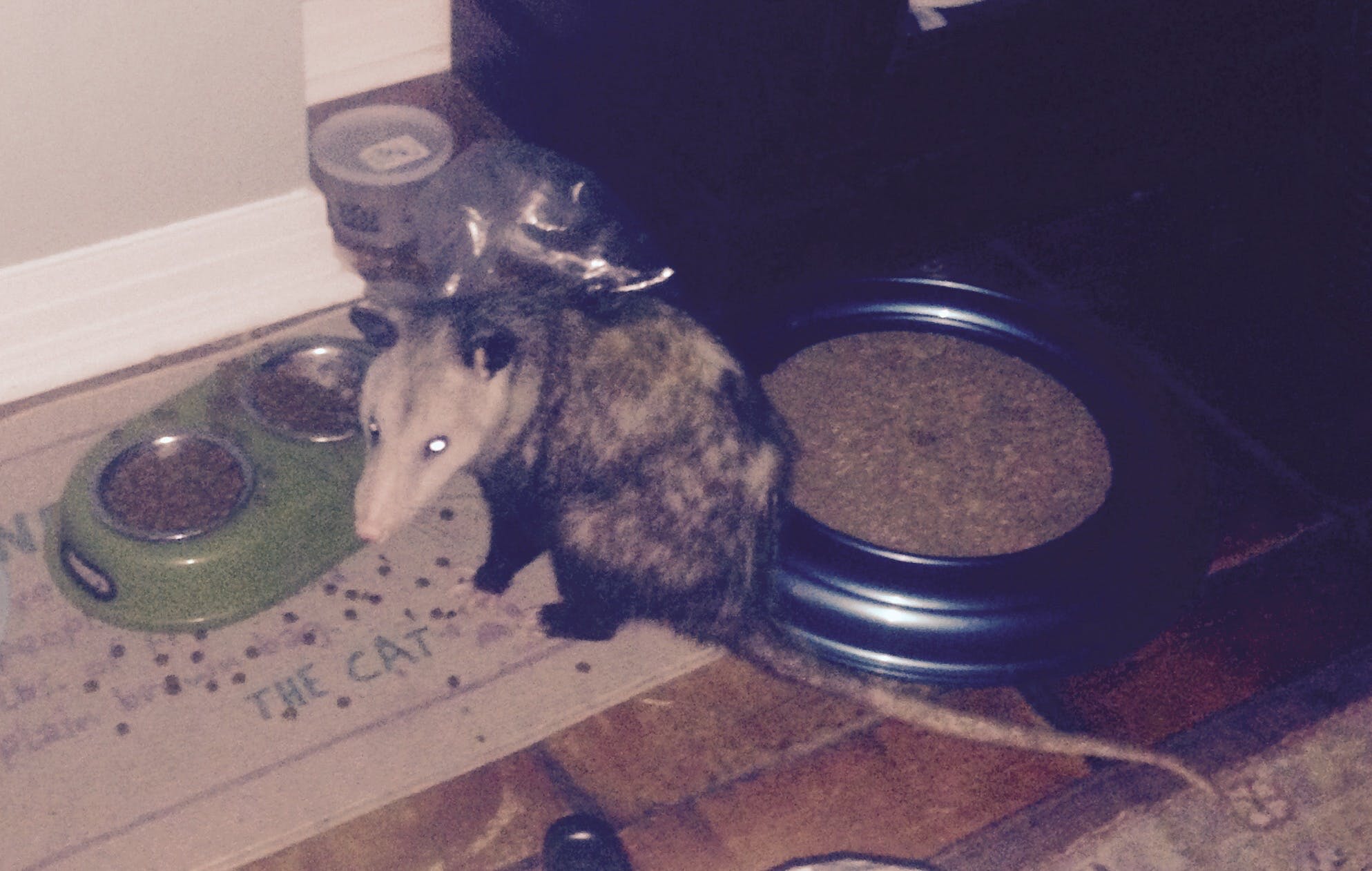 Well, since then, it’s become a pretty much nightly occurrence. If that back door is open, she’s coming in, and she won’t leave until she cleans out both cat bowl or I run her off (taking care to keep her out of our bedroom; my wife was not pleased when Maybelle scuttled under our bed one night). Some nights it takes a banana to coax her out. For some reason Maybelle is shy about her bananas—instead of eating them where I leave them, she snatches them in her jaws and toddles off into the night, devouring them peel and all in the backyard, leaving only an inch or so of stem (and poop) behind. 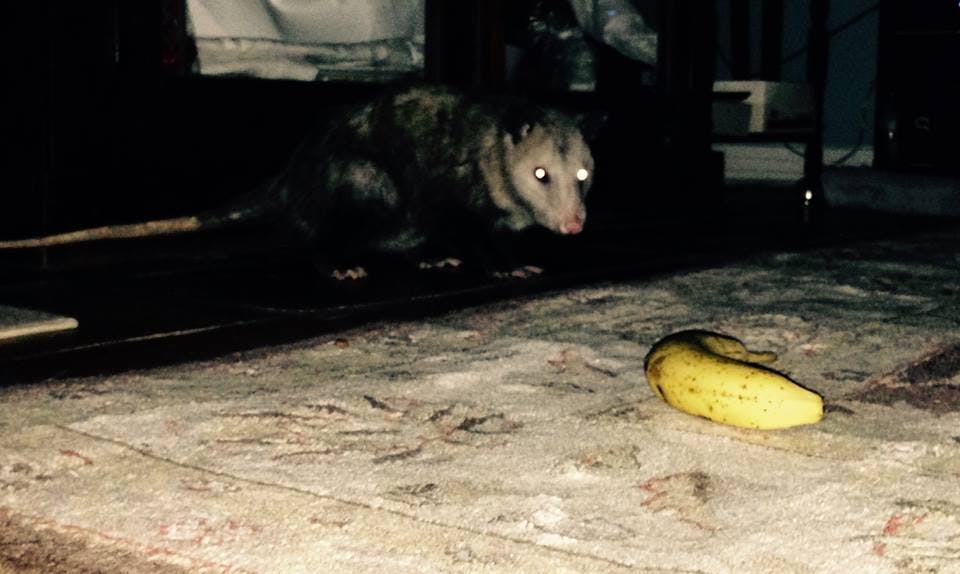 As you can see I’ve started photographing her nocturnal visitations. She is getting bolder and so am I, and I have publicly vowed that I intend to tame her into a lap opossum by Christmas. I’m kidding about that part. I think.

I’ve been posting the pics to Facebook and the reaction has been mixed. Some people really, really hate opossums on a visceral level, the way other folks are hard-wired to loathe spiders, snakes, and scorpions. A few of those people have suggested I shoot her. Others have told me I ought to cook her.

Many other people are misinformed. Opossums rarely carry rabies (as marsupials, their low blood temperature is not conducive to the survival of the virus) and rarely bite, despite their mouthful of fangs. Maybelle has never even bared hers at me, nor has she been impolite enough to hiss, as many opossums are wont to do. By and large ,they are good to have around: they eats lots of roaches and ticks and other pests. Our cats tolerate her as a sort of strange semi-sibling. On nights when we leave the door closed, she will often be waiting to come in alongside them. Sometimes she is out there alone, peering forlornly at the cat food that lies so close, and yet so far away, waiting for her big chance at that crunchy bounty. 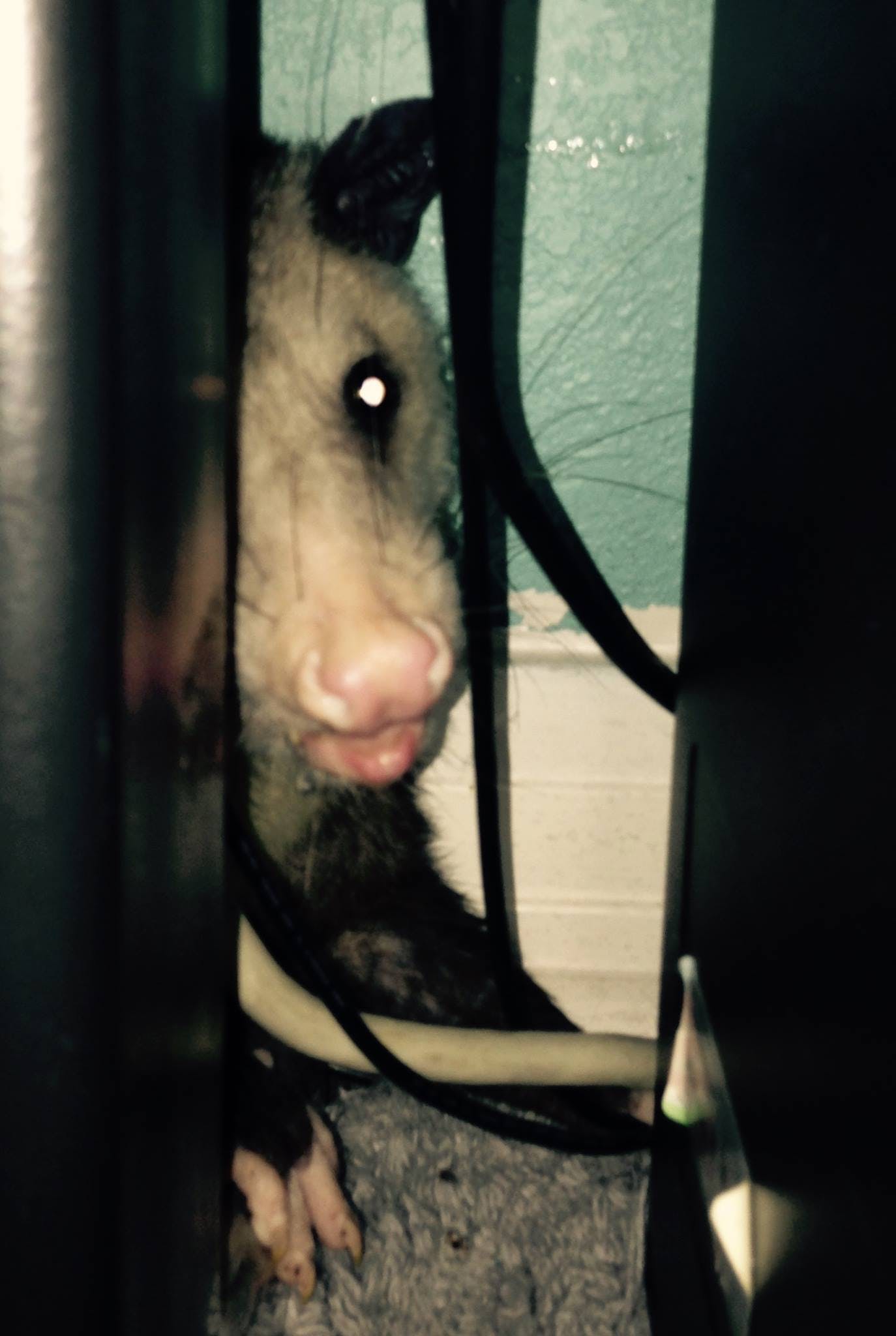 There are some downsides. She does stink, and I hate to say this about our semi-pet, but she is not a pretty opossum. These creatures have a great deal of facial variety; some are objectively cute. Not Maybelle: not with her extremely long snout and those strange appendages that look like little horns curling out of her nostrils.

But this house is not Studio 54, and my wife and I are not snooty bouncers: opossums, even ugly ones, are welcome.