One hundred dollars is as much an abstract concept as a quantifiable figure: What would you do with . . . ?  And your answer might differ depending on where you’re based. After all, $100 gets you a lot more in some places than in others.

That’s the point of a new map released by the Washington DC-based think tank the Tax Foundation, which breaks down—state-by-state—exactly how much purchasing power $100 has throughout the U.S.

The methodology for the study involves comparing the price of goods in each state with the national average for those goods based on data from the Bureau of Economic Analysis.

Figures like that help explain things like this 2010 map from The Economist, which track who is moving to Austin, and from where. 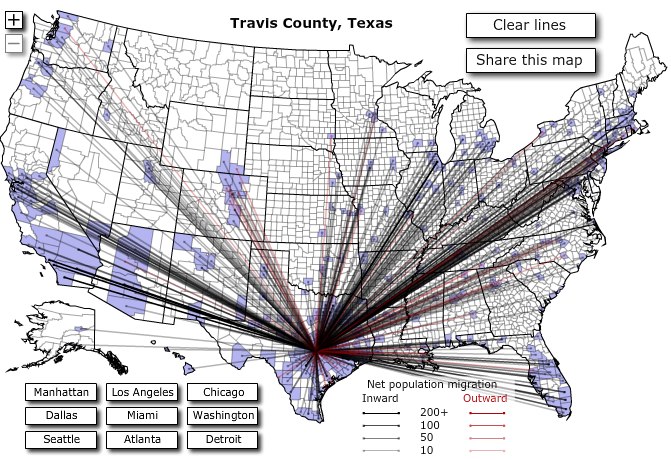 The inward migration to Austin is largely from places where your $100 doesn’t go very far, in other words. As insights go, we’ll place that one somewhere short of “scintillating.”

It’s worth noting that the Tax Foundation’s map doesn’t break up states by city—that $103.64 figure averages out the entire state of Texas, from relatively low-cost areas like McAllen to more expensive cities like Austin. But that also means that the $86.66 figure from New York encompasses both Manhattan and a place like Buffalo, where the average rent is $755. At least based on anecdotal observations, more of the people who move to Texas from New York seem to be coming from New York City, rather than Rust Belt parts of the state like Buffalo or Jamestown, which suggests that they’re finding the swing in what their dollars can buy to be even more extreme.

Looking at the map, in fact, Texas occupies the best of both worlds: It’s a large, booming, fast-growing state where your $100 goes further than almost any other state growing at a rate that exceeds than the national average. (North Dakota, which saw its tiny population surpass 700,000 people over the past four years, is actually the fastest growing state where your $100 goes furthest, at $110.62, but with such a small population, it’s hard to know how stable those figures are.) Most other big large states are either stagnant on growth or their dollars are worth significantly less. (Florida, the 5th fastest-growing state, does well, too—$100 there is worth $101.21.)

There isn’t a ton of actual utility in looking at figures like these, of course—this is more of a lark than a trenchant insight into the national economy—but there are interesting things you can extrapolate from it. It helps explain why things that have fixed prices are more common in places where the dollar otherwise tends to not go as far: $100 might go a lot farther in Mississippi ($115.73) than it does in Washington DC ($84.60), but a new iPad Air costs $500 in both places, which would make it seem like a relative bargain in DC, while it’s awfully pricey in Mississippi.

In any case, if you wanted to have something new to brag about to your friends in New York and California, you can rub these figures in their faces—at least until they move here, anyway.